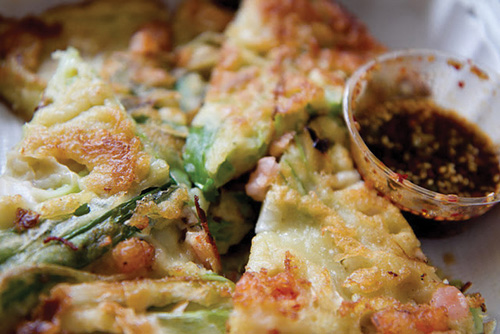 APPETITE Growing up partly on the East Coast (New Jersey) with close Korean friends exposed me to the pleasures of kimchi and burning hot ssamjang (a Korean hot sauce) early in life. In Flushing, Queens, I savored endless incredible Korean restaurants, often filled only with Korean customers. I was first hooked on those crispy, comforting Korean pancakes, pajeon, and my fondness for the cuisine grew from there.

Although more than 30 percent of our city’s population is of Asian descent, our Korean community is not as large as that of LA or NYC, which could be why we’re less the Korean food Mecca those two cities are (despite our abundance of Korean BBQ joints, that is). But there’s been a recent wave of Korean openings I can only hope will signal a robust Korean dining catalog in our future. The more bulgogi and bibimbap in this town, the better. While I usually find less to love at places mixing cuisines, like the Tenderloin’s new Ahn Sushi & Soju serving both Japanese and Korean food, here are three recent openings that show promise… and none are Korean BBQ.

Aato, a new “Korean fusion” restaurant in the Marina, is an unexpected oasis on busy Lombard Street. Owner Jennie Kim grows herbs in potted plants by a little front patio strewn with white lights. Despite a pricier menu than one typically sees in Korean eateries ($12–$15 for starters, $13.50–$25 for entrees), Aato does things differently, apparent from chandeliers in the surprisingly elegant dining room to the use of locally grown, organic ingredients (though common-as-day in SF, unusual for local Korean spots). Initial highlights include ssam, which literally means “wrapped” in Korean. There are three versions served with rice, kimchi, veggies and rice paper wraps. My gut pushed me straight to eel ssam, but Kim talked me into hangbang (Herbal) bo ssam. I wasn’t sorry. The tender, steamed pork is aromatic and nuanced with herbs. Man-du Korean dumplings are delicately pan-fried, plump with kimchi and shrimp, an exemplary appetizer. Jab-chae is traditional sweet potato noodles stir-fried with beef and seasonal veggies. Weekend brunch intrigues with the likes of eggs with “Korean-style” hash browns,, man-du dumpling soup, and a fritatta with tobiko, salmon, avocado, and cheese.

Japantown’s Nan works for two reasons: it’s a minimalist, airy space, with an extensive menu that tends slightly toward creativity. Skewers of pork belly and BBQ beef abound, alongside rice bowls, bibimbap and rice cakes. Seafood pajeon is not the perfection it is at Manna (see below), but bulgogi beef mixed with wheat noodles utterly satisfies, particularly with Asian beers on tap.

Manna offers a clean, friendly dining room in the heart of the Inner Sunset. It serves a number of Korean classics with varying iterations among their 44 dinner menu items. There are diverse versions of bibimbap, short ribs, and stews. Manna also fries up a buttery seafood pajeon (Korean pancake), loaded with leeks, scallions, mini-shrimp, and squid — one of the best I’ve ever had.

OTHER RECOMMENDED (BUT NOT NEW) KOREAN STOPS: