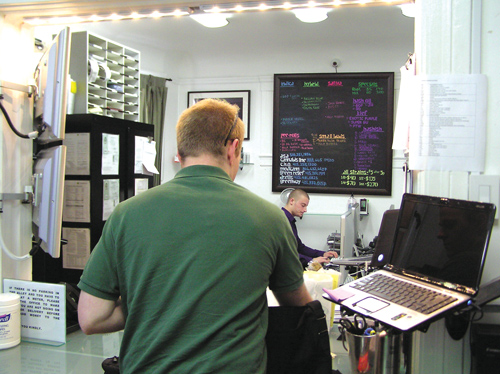 HERBWISE When asked to describe herself, Green Cross Dispensary patient Nicole Williams laughs. “I work full time, I go to school, I care for my mom. My brother’s taking the LSATs on Saturday — what else should I say? Native San Franciscan, long time resident.”

She’s being interviewed by the Guardian to gauge the demand in the Excelsior neighborhood for a new business that’s relocating to the neighborhood where it will be the first of its kind: the Green Cross’ new marijuana dispensary walk-in facility. Currently, the company is the city’s sole licensed delivery-only dispensary.

The Green Cross is hoping to have a little more luck with 4218 Mission than it did with its first location, which opened in Noe Valley in 2004 as a more professional alternative to the stereotypical cannabis club with “long haired hippies behind the counter,” in the words of dispensary employee Caren Woodson.

But the idea attracted so many customers (some garnering complaints that marijuana was being sold on the street) that the city’s planning department rescinded owner Kevin Reed’s permit for the space. After a disappointing attempt to open a location in Fisherman’s Wharf, an aide to the Mayor encourage Reed to try for a delivery-only permit instead. Now, the dispensary hopes the third try’s the charm. A public hearing to discuss its application to re-open in the Excelsior is scheduled for Nov. 17.

“We’re going to make sure we’re addressing the neighbors’ concerns,” Reed says, sitting on a stool in the Green Cross delivery and call center, which operates out of the front rooms of his comfortably-appointed SoMa apartment. In front of him are the flashing screens of 32 security cameras — a glaring reminder that Green Cross’ first commitment is to safety.

Green Cross employees dress in business casual — even, as this reporter witnessed, when they’re up to their elbows in bowls of weed nugs they’re breaking apart. Though currently located in a mostly residential building, Woodson claims that the business has never received a single neighborhood complaint.

The delivery service has now served over 3,000 clients. Having sunk a half million dollars into failed permitting procedures, Reed hopes he’s created a comprehensive plan that will pass the expectations of the various city agencies through which one must venture to open a weed dispensary.

The new location will necessitate a focus on discretion and security. Monroe Elementary School and the Mission YMCA are both a few blocks away. Plans include a wall that would block all view of the goings-on inside the dispensary. Plans do not include a space for on-site smoking, and members will have to sign a code of conduct that says they’ll be respectful of the surrounding neighborhood.

350 patients in the Green Cross’ database live in the proposed site’s 94112 zip code. Williams is one of them, and has been a patient since Green Cross’ Noe Valley days. She’s nowhere near the image of a troublemaking pothead, but it’s small wonder she was “pretty excited” to hear that she might be getting a new neighbor.

“You’re just looking for a safe place where you can get your medicine and go home.”

One Dr. Carlton B. Goodlett, SF