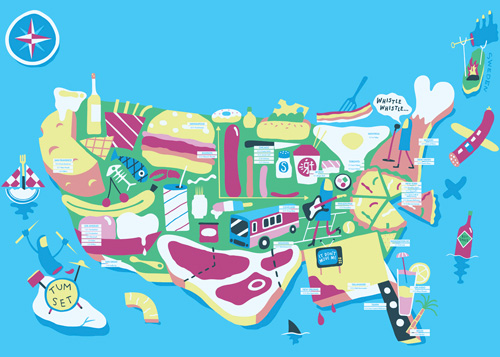 MAXIMUM CONSUMPTION Looking to gorge on super-sweet, Swedish-made indie pop? Peter, Bjorn, and John, the nearly-twee trio who made whistling cool again for a minute in 2006 with indie hit “Young Folks,” is returning to the States for a thematic “All You Can Eat” tour. The band’s food-friendly jaunt includes multiple nights in each city, and specialty food truck tie-ins. I spoke with John Eriksson via phone while he hovered near a grilled cheese truck:

San Francisco Bay Guardian: Where did the idea for “All You Can Eat” originate?

John Eriksson: We wanted to make a tour for the fans, like when you were a kid and you came to your grandmother’s house and you could eat as much candy and cake as you wanted — that feeling. We wanted the fans to get as much as possible. In some cities like New York, we’re playing as much as six shows. So it’s more venues and they see it over and over again until they throw up almost.

Also, we have connected it with some food trucks. We have one here [in Miami] — it’s a grilled cheese food truck. The fans can go to the truck, say the right password, and they get something free. That came after the idea of the tour. We wanted to fill the fans with as much PB & J music and as much calories as possible. It’s not really connected with the music but it’s a fun thing to do — something different. And we love food. One of the most fun things when you’re out touring is trying to find good places to eat.

SFBG: What are the comfort meals of your childhood in Sweden?

JE: A lot of rustic Viking food. Food you’re supposed to eat after working 12 hours shoveling snow [laughs]. I come from a small town in the north of Sweden and we have a signature dish there called palt. It’s like a potato bun filled with the fat of the a pig. It’s very good actually. You put butter inside the ball of fat, which make it even better. That’s the only time I eat meat.

SFBG: Your most recent album ‘Gimme Some’ (Startime) had an interesting back story.

SFBG: What songs are you playing on this tour?

JE: Keeping with this “All You Can Eat” thing, the idea was to play all the songs. When you have the opportunity to play in a city several nights in a row, you can play different songs every night. We’ve done six records so far, so it’s a cool mix of new and old songs. Of course we play “Young Folks,” some people like that, we play “Second Chance” from this record, which features a cowbell, which seems to drive people wild.

With Release the Bird

Maximum Consumption is an unseasoned look at the increasingly overlapping fields of music and culinary arts. For more, visit the Noise blog on SFBG.com.