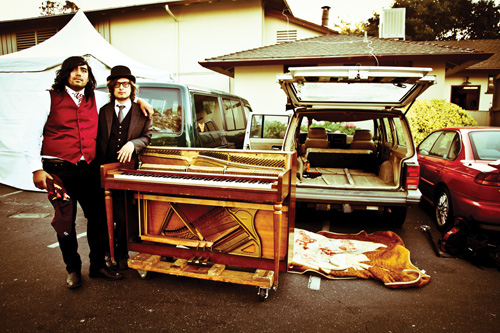 MUSIC When John Steven Morgan and John “Thatcher” Boomer III — who make up the John Brothers Piano Company — finished their last set at the 54th Annual Monterey Jazz Festival last month, my eyes weren’t watering alone. It wasn’t the barbecue smoke from the nearby food tents, or the too-bright afternoon fairgrounds sun. The John Brothers shake their listeners to the soul, because these piano-playing souls are shaking too. And MJF was their formal music venue debut.

Most other days, the John Brothers work together electrifying SF street corner audiences with skillful, joyous frenzies on one of their Craigslist-freebie upright Wurlitzer pianos. And they hope to soon bring their music to new cities. Over the course of the last year, they’ve compelled perhaps hundreds of local passersby to stop and watch. That’s gold for Morgan and Boomer, who say they want to give the listener the most visceral possible reaction. “I’d like to trigger a miscarriage,” Boomer deadpans.

The John Brothers put their own bodies into their art, hefting their piano to locations on a custom dolly, in and out of “the Contender,” a crumbling 1991 Jeep Cherokee. It’s not clear how much longer they’ll be hulking piano for a living. While their plan is to save up for a giant cargo van and tour around the U.S. just the two of them, by the end of the MJF they were in talks with a potential manager. “It’s just too much stress,” says Boomer of managing themselves, alluding to the CDs they forgot in Oakland on the trip to Monterey.

The CDs, which they sell out of a top hat, are filled with just one example of their repertoire. Morgan and Boomer’s original compositions are often mistaken for ragtime, but Morgan explains, “It’s not ragtime. Our influence comes mainly from the ’20s and the ’30s: Fats Waller, James B. Johnson, Art Tatum.” The two self-taught musicians have distinct styles, producing together a wild, organic, often playful mashup of classical, Morgan’s “gypsy stride,” Boomer’s blues, and a little jazz. Their ever-morphing reinterpretations oscillate from tender to eviscerating, raunchy to prim, mad to whimsical.

Local filmmaker Dan Reed of NextBooth.com, who accompanied the band to document their MJF appearance, met the John Brothers on the street, and asked immediately if he could use their music in his short films. “Other [musicians’] songs capture moments — their songs are full narratives,” he says. Reed used the John Brothers’ track “Computer Duster” as the soundtrack to his short Curious Chris, about an innocent man who gets bamboozled. The duo’s music both enlivens and takes new meaning from the film, as Morgan carries the listener from an expansive, melancholic opening, an unpopulated landscape with the delicate curiosity of a child, which blends into apprehension mixed with determination, building seamlessly to a swaggering, gypsy caravan staccato finale. Morgan says he’s eager to score future Reed films.

As the opening number for their first set at the jazz festival, Morgan, his broad shoulders bending over the keys, tore “Computer Duster” apart to create a novel Frankenstein of madness, thick shoulder-length hair swinging in his face, dissolving into chaos and in a moment resolving to the melody, the crowd simultaneously alienated and mesmerized; they were cheering by the end.