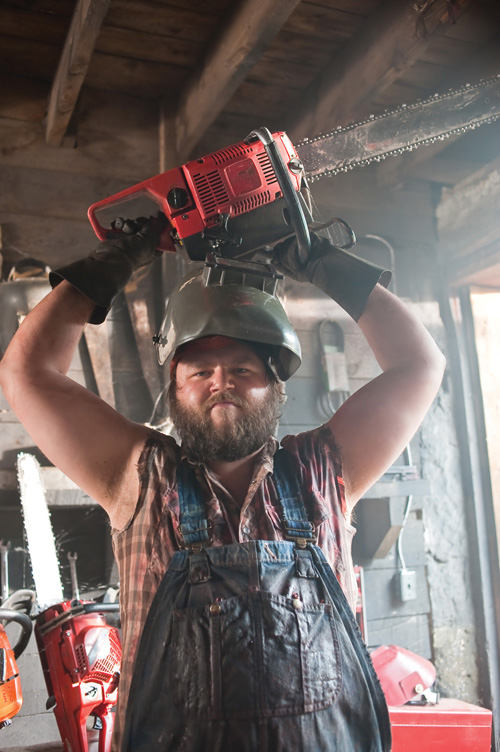 FILM Hillbilly horror is nothing new. Some might mark its heyday as the 1970s, a decade containing Deliverance (1972), The Texas Chain Saw Massacre (1974), The Hills Have Eyes (1977), and I Spit On Your Grave (1978). Others might point to Herschell Gordon Lewis’ immortal Two Thousand Maniacs! (1964), probably cinema’s most persuasive example of why Yankees road-tripping below the Mason-Dixon Line should never, for any reason, detour off the main highway.

Twenty-first century hillbillies are still scary, at least on the big screen; this is one stereotype that’ll never die. Any number of recent horror films — most of them remakes of the films noted above (or directed by Rob Zombie) — have drawn their clichéd plots from a checklist that always includes city slickers, cars that break down, cell phones that don’t work, and inbred locals. The lesson remains the same: stay the hell out of the backwoods, yuppie!

But what if, asks Eli Craig’s Tucker and Dale vs. Evil, you were totally misjudging those sinister-seeming whiskey-tango yokels? What if, despite being a little unwashed and fond of sharp objects and power tools, they happened to be really nice guys? The film — about a couple of blue-collar dudes (Tyler Labine and Alan Tudyk) hanging out at their mountain cabin who unwittingly terrify a group of vacationing college kids — finds a sense of humor in the tired genre. The result is blood-spattered comedy gold.

“The initial premise was: what if Leatherface from Texas Chainsaw Massacre was really just a good guy with an unwieldy chainsaw? It’s the good-looking college kids that have been terrorizing him!” explains first-time feature director Craig (he also co-wrote the script). “In order to pull this off, there has to be a series of misunderstandings. My writing partner, Morgan Jurgenson, and I made a rule that Tucker and Dale would never hurt the college kids. They just kept on accidentally killing themselves and leaving their mangled corpses in Tucker and Dale’s yard to deal with.”

The accidental suicides (most memorably, via wood chipper) are gruesome enough to please genre fans — but are also pretty goofy. The label “splat-stick” has rarely been so aptly applied.

“The film satirizes and often pays homage to the clichés of the slasher-horror genre. So it has the look and feel of a horror film, but I think of it as a comedy,” Craig explains. “I always erred on the side of big laughs, and for the stuff that was meant to be more horrific, I tried to push it into a realm where it was so big that it wasn’t quite believable, and hence allowed people to still laugh.”

Horror comedies may not traditionally rake it in at the box office, but they often become cult sensations — see: 1985’s Re-Animator and 2004’s Shaun of the Dead. For Craig, whose film is firmly in the midnight-movie tradition, the lasting appeal of the genre (which goes back even farther than hillbilly horror — see: Abbott and Costello) is obvious.

“To me [horror comedies are] a subcategory of black comedy which basically deals with the farce that is human existence,” he says. “We are all stuck within these hopeless limitations — we can only see life through one pair of eyes, and we will all face our own demise. But to laugh at it all, to see that the world is both cruel and hilarious, to find joy in the hopeless, that allows us to transcend our problems. Good horror-comedy is about laughter amid despair, [which] really is the best option we have sometimes.”