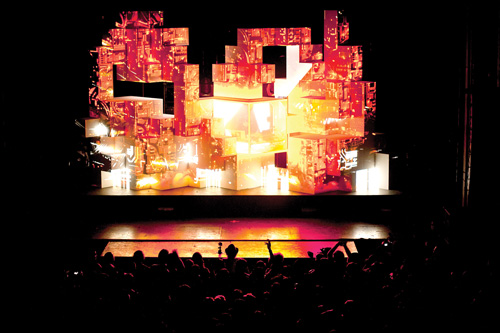 MUSIC Pioneering electronic composer Pierre Schaeffer used a specific word to describe his work, which took ‘common’ noises and manipulated them into music — acousmatic: “referring to sounds that one hears without seeing the causes behind it.”

Every sound on genre-defying musician Amon Tobin’s latest album is a mystery. The 2007 album Foley Room utilized cinematic studio techniques, reaching back to the roots of electronic music. Now Tobin has shot that line of inquiry into the other direction, seemingly returning from the future with ISAM, an album as alien as it is familiar. “As technology develops, you can go one of two ways,” Tobin says in a phone interview. “You can do the same things that people did ten years ago just with less stress involved, or you can take that tech and try to get more out of what it was designed to do — things other people haven’t figured out yet.”

Tobin occasionally lets people peak behind the curtain. A video earlier in the year showed his hands at work, recording light bulbs (they make sounds, if you know how to play them), plugging them into a high-end, triple axis, pressure sensitive MIDI controller. This last instrument, a Haken Continuum, comes with enough of a learning curve to exclude most people from duplicating what Tobin does with it: morph conventional sounds into conceptual instruments that only exist in the artist’s mind. When it came time to post ISAM online, Tobin annotated the album, revealing sonic origins. The enchanting female vocals that appear on tracks like “Wooden Toy,” for instance, are his own, gender-modified.

There was also a warning: “anyone looking for jazzy brks [sic] should look elsewhere at this point or earlier :). it’s 2011 folks, welcome to the future.” A clear statement, breaking away from the sample heavy style that Tobin was once known for, material tailored for DJ sets, in a club. With ISAM, that’s not the whole story. “Electronic music isn’t always dance music, in fact dance music is just a section of electronic music,” Tobin says. “This record isn’t dance music, its not about raving or any of that stuff.” It’s the kind of album that might make you want to put on headphones and let the mind run wild. For all its meditative qualities, though, it’s hard on the bass and expressive, with a range that begs to be heard in a louder arena.

Thinking of a tour, Tobin “had the problem that all electronic musicians have, which is how the fuck do you present electronic music, which is so not to do with performance, as a live thing that’s engaging?” The solution, a next-level stage set created by L.A.’s V Squared Labs, Chicago’s Leviathan, and S.F.’s Blasthaus, has Tobin cast as the pilot of a space-going vessel in a narrative that the artist admits is “not War and Peace, not a brilliant epic thing, but it’s enough to give meaning and direction to the visual content.”

A 25-foot-long, multi-dimensional structure of giant pixel cubes resembling a game of Tetris going very badly, the ISAM installation comes to life via a system that allows multiple projectors to transform every surface into a screen. It’s effectively 3D without the need for dorky glasses and eye strain. (A promo video released on YouTube surely sold more tickets than a hundred articles like this.) Tobin’s place on stage is within the piece, positioned like a magician or contortionist: inside a box. Which, perhaps, is just where he’d like to be. “I always kind of put myself in the corner of a stage if I can,” Tobin says, “because there’s nothing worse than standing in front of a thousand people who are all staring at my every minute movement and feeling like maybe I should just turn the lights off, because there’s nothing to see here.”

The unconventional choice of positioning the artist more like ghost in the shell than man on a pedestal has its limit. Alex Lazarus, the creative director on the project says in conceptualizing the performance Tobin “wanted people to focus more on the actual music and visual representation as opposed to focusing on him.” But Lazarus says “he can’t just not be seen, so I had to open my big mouth and tell him that we could use this smart glass in his cube, which can be turned on and off to see inside. It’s cool and all, but it’s extremely expensive and every single time we have to touch it I’m petrified that we’re gonna break it.”

Seeing the wizard at work alleviates the creeping possibility of a Milli Vanilli situation, but still, like Brad Pitt in Se7en, I want to know what’s in the box. (What can I say? I’m no fun — I also want to know how magicians do their tricks and how Pepperidge Farms draws the little faces on Goldfish crackers.) Is Tobin manning extra controls to sync the visuals? Is it all automated? Specific details, however, are generally off limits, as both Lazarus and Tobin invoke “proprietary technology.” Which is fair. Considering how many people worked on innovating the project, a trade secret is valuable. (Years after debuting, the similarly impressive LED tech behind Daft Punk’s ‘pyramid’ paid off again when its designers essentially reshaped it into deadmau5’s ‘cube.’)

Tobin says there’s absolutely no compromise musically. Even when he does a more traditional DJ set, he has it all worked out ahead of time. “When I go and see a show I don’t want to see people wanking off on their equipment,” Tobin says. “I love to watch things that have been really well thought out and practiced.” Whatever he’s doing in that box, he’s enjoying it. “I feel like I’m in an Apollo 13 capsule. The whole thing is based on the idea of it being a spaceship and the funny thing is I come into the cube and it literally looks like a cockpit from the inside.”

I ask him if this means he doesn’t have to pretend for the part. “Well,” Tobin says, “if I was pretending I’d probably have a band up there trying to play the record. Kind of a waste of every one’s time.” His voice is deadpan, but sounds like he’s grinning, just a bit. *