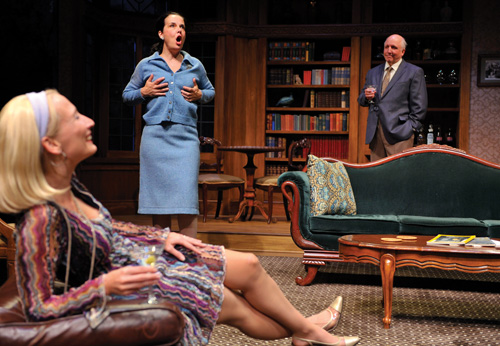 THEATER New plays are usually big selling points for theaters, and they have a certain pizzazz for audiences too, but their power to renew interest in theater is a different matter. The best play seen on a local stage so far this season is not a new play, as it happens, but an old one, with a big name attached and a Pulitzer in tow. But Edward Albee’s A Delicate Balance (1966) reminds you why people go to the theater in the first place.

Into their collective, quotidian sniping and maneuvering comes, unexpectedly, a touch of the paranormal in the form of old friends Harry (a quietly overwhelmed Charles Dean) and Edna (Anne Darragh, projecting an eerie combination of panic and power), who arrive on their doorstep as supplicants fleeing an unknown terror. Suddenly, hard on the heels of peacemaker Tobias’ anecdote about a cat he once had put down after it stopped liking him, the patriarch confronts a supreme moral challenge: what to do with Harry and Edna? What to do, for that matter, with the whole family?

Enduringly interesting and moving, A Delicate Balance (and its dream cast of veteran actors shrewdly helmed by artistic director Tom Ross) revels in the niceties and byways of language even as it limns the ineffable breach between individual and other, madness and sanity, unforgiving fact and accommodating memory — the whole teetering “balancing act” that plays out across a pair of long evenings into a flat, hazy dawn.

Albee’s mode here is a sort of torn naturalism: a naturalism into which something incomprehensible intrudes, making the artificiality of received reality suddenly, disturbingly apparent. For the terror that descends on scared, and vaguely scary, Harry and Edna — driving them and their “plague” into the midst of Tobias and Agnes’ home — that terror emerges from the same waters Tobias and Agnes inhabit. It swarms the land and then, just as unexpectedly, it recedes, like a tsunami that leaves things more or less as before, at least on the surface.

You could call this word-drunk, witty, and boldly imaginative drama an endlessly engaging exploration of the phrase “domestic harmony” — in all its fear-bound resignation, calculation, and codependency. You could also call it a philosophical musing on the problem of community and the obligations we social animals owe one another. But definitions are almost beside the point with a great play because it’s too alive for any label, always sliding out from under it.

What is certain is that a play like this leaves you awake and wandering around the world you share with it. It also, less happily, makes a regular theatergoer realize how these days many new plays (those being produced locally, that is) have been forgettably thin, however clever or amusing. Even Aurora, which does an admirable job with the Albee play, last season premiered one called Collapse full of the typical vices: a play whose bid for social relevance, lacking any significant insight or imagination, remains only superficially meaningful. Comfortable platitudes and conventional tricks substitute too often for intellectual and aesthetic daring. Who could say that about A Delicate Balance?