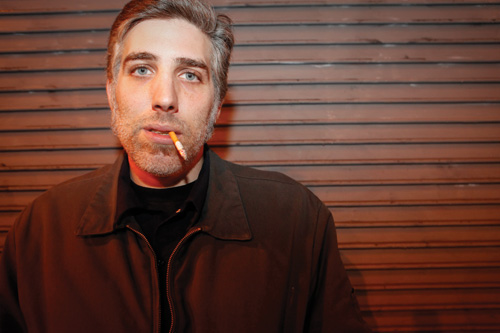 MUSIC “There are people like us who decide we no longer want to deal with what is fed to us through commercial forces,” says infamous hardcore singer Mike Apocalypse, “We strive to create new things — if I couldn’t create new music, I would fall apart in a month’s time.”

It’s wretchedly hot on a Sunday afternoon at Mission bar Laszlo when Apocalypse, 37, makes the above statement while ordering a shot and a Red Stripe. Over the course of two-and-a-half hours, he orders many more shots and beers, and excitedly bumps into a cadre of fellow music-maker friends.

With a broad grin, his sea-green eyes widen as he recalls the early 90s origins of Gehenna, his longstanding hardcore-black metal band. He folds his tattooed fingers (one reads “83%” in ode to Gehenna’s first song) over a beer with a mention of the upcoming chopped and screwed Gehenna mixtape.

In addition to his role as Gehenna’s singer, Apocalypse is also a respected local DJ. He beams while giving me the rundown on his daily routine: recording music at home in the Excelsior District every morning, DJing at Laszlo, Showdown, or Argus Lounge every late night; recently spinning disparate tracks by the likes of Infest, Stone Roses, and Nipsey Hussle.

This, his openness and agreeable demeanor, are in direct contrast with his fabled persona. Mind you, he’s only a legend in the underground, in small pockets of cities like San Diego, Orange, Calif., and Reno, but within certain crowds, the rumors are alive. If you’ve heard of him — and chances are, you haven’t — than you’ve heard the drama.

The rumor mill: Apocalypse stabbed a guy at a punk show. He punched someone in the face at a record store. He contributed to another musician losing his mind. And so becomes a legend. There have been outsized rumors and half-truths, tattooed cupped hands whispering circles around Apocalypse, also known as Mike Cheese or DJ Apocalypse, for decades.

“You know more of the rumors than I do, and you know more of the falsehoods than I do,” he says. Without addressing any specific incidents he lays it out: “The rumors also come from people who have attacked me physically and they thought they could fuck me up. Fact is, I don’t bullshit. If you think you’re going to fuck me up, unfortunately, I’m pretty good at handling my hands, I’ve got some good fist game because I grew up in Detroit.”

That last part is unquestionably true, he lived in Detroit until age 14, when he moved to San Diego alone. By age 17, he was straight-edge and on a cheeseburger diet (hence the name “Cheese”). He met fellow musicians through the hardcore scene and formed Gehenna. With its pummeling drum beats, black metal riffs, droning breakdowns, and Apocalypse’s tortured, growling vocals, it brought something new to the 1993 hardcore table.

“I brought in some of the more metal elements, Mickey [Rhodes Featherstone] brought in 70s proto-punk and DC [Grave] brought in the really fucking heavy stuff and the straight thrash — we were able to incorporate all the things we liked into one sound.”

Through 17 years, the band has self-released seven-inches, splits, and a few full length LPs — most recently, 2011’s re-issue of Land Of Sodom II/Upon The Gravehill — and moved from San Diego to Phoenix to Orange to Reno. Apocalypse, far from straight edge, settled into San Francisco in 2008, but since the other members are spread elsewhere, Gehenna only plays SF once a year. “San Francisco, is one of the greatest cities in the United States. This is the most open-minded city I’ve ever been in.”

He seems pleased with his current lot in life; it might be the alcohol or recreational drugs talking, but he’s truly inspirational in his takes on art, music, life. Truth to those whispered rumors or not, legend or not, Apocalypse is a man of convictions.

“[Gehenna] is not making money, we’re not going to ever sign with a major label, we’re never going to do anything that’s outside of our realm of control. It’s always been about control.”