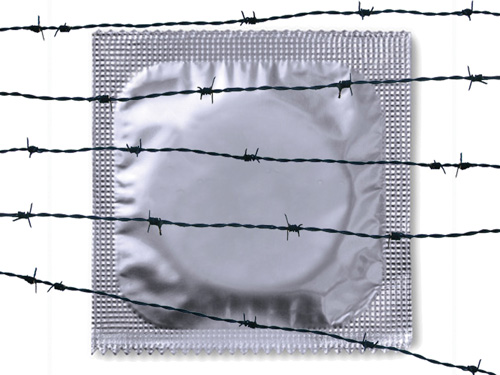 “All Condoms primary location at Customer Service” reads a small sign surrounded by empty shelves that once held condoms, pregnancy tests, and other important sexual health products at the Safeway on Potrero Avenue.

Because of concerns about theft, the condoms now sit among the Nicorette and razors in a row of glass cases near Customer Service, amid the chaos of hurried shoppers headed to and fro. Although Safeway’s recent condom lock-up may have reduced theft, it has also reduced accessibility, and may have deterred customers from buying a product crucial for the prevention of pregnancy and STD’s.

The increased security measures are not contained to the Potrero store, or even San Francisco’s Safeways. “There are a number of products (Oil of Olay for example) that we’ve had to secure under lock and key because of theft,” Susan M. Houghton, Safeway’s Northern California spokesperson tells the Guardian. “It varies by store and city, but yes, condoms were recently added — due to theft.”

Houghton would not go into any further detail about when or why the condoms were locked, but the move has raised concerns by public health advocates.

“We fully understand the position that Safeway is in, but we really would advocate for people having pregnancy tests, condoms — anything that really helps people manage their lives better — to be much more accessible,” Adrienne Verrilli, a spokesperson for Planned Parenthood in San Francisco tells the Guardian. “Accessibility is often key, especially for young people.”

Kyriell Noon, executive director of San Francisco’s STOP AIDS project, says he believes locked cases could deter people from buying condoms, “especially for young people who are shy or could be embarrassed about asking for help…Condoms should be as easy for people to access as any other item available for purchase on the market. When there are barriers between people and condoms, I think many people will shrug and give up. But if they’re easy to access there’s no excuse to not use them.”

STOP AIDS knows the importance of condoms in the prevention of HIV, and distributes free condoms to 90 locations throughout San Francisco.

Safeway representatives and staff members refused to say which Safeways have moved condoms behind glass, but a visit to four San Francisco Safeways found condoms locked in cases at each of them, some even locked behind the Customer Service counter.

At the Safeway at Church and Market streets, we found that there is often a line at Customer Service, which customers must now wait in to purchase condoms. The process of acquiring condoms requires requesting the case be unlocked, making a selection under the watchful eye of an employee, and having the employee remove it from the case and walk it back to Customer Service where it can be purchased. Ten minutes had passed before I was leaving with my $8.99 12-pack of Trojan ENZ.

This challenge could affect teenagers more than adults due to embarrassment, hassle, or the now public process of choosing and purchasing condoms at Safeway. “It puts young people in a very awkward situation,” says Leah LaCroix, president of the San Francisco Youth Commission. LaCroix says she does not believe condoms should be locked up, even if it means a company loses profits.

“I think public safety is more important than that,” she tells the Guardian. LaCroix and the rest of the Youth Commission are currently urging the San Francisco Unified School District, “to reevaluate and come up with a new curriculum for health education,” she said. “I’m sure safe sex will be a component of their new curriculum.”

A 2009 Center for Disease Control survey found that 43.5 percent of high school students did not use a condom during sex, and 85.6 percent did not use birth control pills the last time they had sex, making sex education and birth control availability increasingly vital.

“I’m not sure you can criticize Safeway for protecting their merchandise,” says Beth Brown, manager of San Francisco’s New Generation Health Center. “I think there’s a larger issue of a lack of resources and lack of resourcefulness.”

Brown says she believes the Department of Public Health is responsible for providing these resources. One resource that is available is a service called Family PACT, which provides reproductive health services to low-income residents.

“The state of California pays for young people who need confidential services…and you can get all the birth control you want,” she tells the Guardian. The New Generation Health Center enrolls teenagers and young adults in the service, and gives away free condoms to non-enrolled teenagers as well.

“The state of California is actually a very good place to be if you’re young and sexually active,” says Brown, “because they will pay for it.”

“What’s interesting about that,” Verrilli said of Safeway’s condom lockup, “is that it’s kind of going backwards to where we used to be as opposed to moving forward to where we are.”

Today, with condoms available to purchase for any age, public health clinics in most cities, and sexual education available on the Internet, making birth control readily and publicly accessible seems to be the next logical step. Besides preventing pregnancy, condoms are crucial in preventing the spread of HIV, the virus that causes AIDS.

“I think we should all be in the practice of increasing access to condoms rather than decreasing it,” Noon said. “I don’t know that Safeway’s decision alone would make a huge contribution to the spread of HIV, but they could be setting a precedent that other stores that sell condoms might follow. If it were the case that Walgreen’s and Rite-aid, etcetera, also began to follow this practice, I think we would have a problem.”

SFBG’S CONDOM BUYER’S GUIDE FOR THE YOUNG AND SHY

A wide variety of unlocked condoms are sold at:

Plus: offers STD testing and other health services

Plus: open until midnight every day

Free condoms are available at:

Plus: also distributes free condoms to restaurants and stores in the city including: