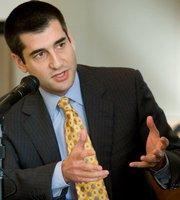 David Onek has been running for district attorney pretty much since former D.A. Kamala Harris announced she was seeking the office of attorney general. He’s clearly, repeatedly and strongly said he opposes capital punishment and will never seek the death penalty. He told us he’s running because “the criminal justice system is broken” — and vowed, among other things, to start a restorative justice system for juvenile offenders.  And although he’s never been a prosecutor, he told us that “we’ve been arresting and prosecuting people just fine — now we need to reform the system.”

You can see a video of his opening statement and listen to the full interview after the jump.