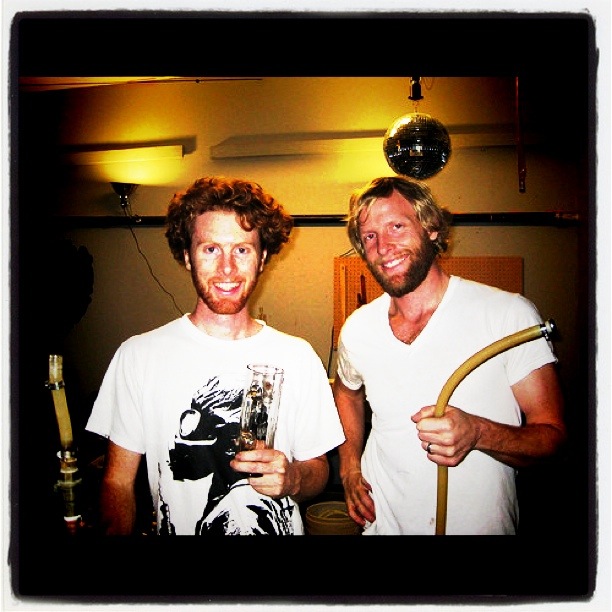 BEER AND WINE The other week, I hit up one of the free, bi-weekly Thursday night tasting parties put on by San Francisco nanobrewery Pacific Brewing Laboratories, located in a small garage on a side street deep in SoMa—and was completely smitten. The adventurous atmosphere and swell-looking crowd were part of that, of course. But the small-batch beers on offer (I quickly downed a gorgeously smooth black IPA), the rogue food vendors (I then dove into a box of Nosh This Bacon Crack chocolate), and the almost-steampunk assemblage of tangled brewing equipment, scuffed kegs, and illustrative blackboards really sealed the deal.

Since they seemed exquisitely attuned to the underground brew-plus-food equation, I asked the guys behind Pac Brew Labs, Patrick M. Horn and Bryan Hermannsson, to tell us a bit about themselves and give us a wee menu of street pairings. Here’s what Patrick came up with for us. (Marke B.)

“Pacific Brewing Laboratory started in a garage as a place for us to experiment with new beer flavors, styles, and brewing techniques. What started out as a place to share new creations with friends grew into a twice-monthly, totally free event with hundreds of our “new” friends and great local street food vendors.

“We brew small, 10-gallon batches which allows for constant beer experimentation. Some of our more exotic beer styles include Hibiscus Saison, Squid Ink Black IPA, Chamomile Ale, Lemongrass IPA, Szechwan Peppercorn Red ale, and wine-soaked oak-aged Brown Ale. We’re always on the lookout for new ingredients and inspirations that will lead us to palate-pleasing creations. For our tastings, we often invite a local food cart to attend, in order to pair our beers against some of the amazing varieties of flavors produced by DIY local food vendors. Below are a few of our favorites, which include beers we enjoy from other local breweries.”

“Leo Beckerman and Evan Bloom of pop-up Wise Sons Deli (Saturdays, 9 a.m.-2 p.m. at Beast and Hare, 1001 Guerrero, SF. www.wisesonsdeli.com) are on a mission from God to bring to us mere mortals the best in Jewish deli. They’ve been serving up their in-house pickles, matzo ball soup, pastries and — most importantly — their weeklong-brined, spice-rubbed, hickory smoked pastrami with home made rye bread to San Francisco and at many of our beer socials since the year 5771. Our Squid Ink is made with darker grains than traditional IPAs and uses West Coast hops to give it a traditional West Coast IPA hop aroma and bitterness. The richness and spices of the pastrami pair perfectly with the citrus-y, hoppy and roasted flavors of the Black IPA. Finish with a house fermented pickle for the perfect sandwich-beer-pickle experience.”

“Anthony Myint and Danny Bowien have created one of the most creative and community minded pop-up restaurant in the nation with Mission Chinese Food (Thu-Tue, 11:30 a.m.-3 p.m. and 5 p.m.-10:30 p.m., at Lung Shan, 2234 Mission, SF. (415) 863-2800, www.missionchinesefood.com). Their delicious twists on traditional Chinese and Asian cooking include kung pao pastrami, thrice-cooked bacon, tingling lamb noodle soup, salt cod fried rice and cold-poached chicken with chicken hearts. Mission Chinese Food also contributes $0.75 from each entrée to the San Francisco Food Bank. The Trumer (www.trumer-international.com) from Berkeley, with its high carbonation, crisp malt backbone and good hop bitterness, offers a good counterpoint to the exotic flavors and spices of Danny’s cuisine. As the heat and tingling build from chilies and Szechwan peppercorns, a pilsner can really satisfy. (And if you need to douse a flaming palate, the low alcohol content allows for a few brews with minor effect.)”

Beer and chocolate go together like Bert and Ernie or peanut butter, bananas, and Elvis. Kai Kronfield of Nosh This (noshthis.com) makes some of the most creative chocolates in San Francisco. Butter toffee Bacon Crack, salted caramels made with balsamic vinegar, Meyer lemon, or salt & pepper… not to mention the Bacon Bourbon Rocky Road. These chocolates are the perfect balance of sweet, salty, and chocolate-y and pair well with darker, maltier beers. 21st Amendments Monk’s Blood (www.21st-ammendment.com), a dark Belgian ale, fits this bill well. Made with the traditional hops and barley, it also contains figs, vanilla, and cinnamon. It’s a complex beer, in a can, that complements the richness and intricate flavors of Kai’s creations. This combo is a perfect end to an evening, a mid-day snack, or breakfast — whatever, nobody’s judging.

“Pizza and beer is typically a no-brainer pairing, but often most choose an IPA, pale ale, or lager to go with their cheesy slice. Moonlight’s Mooonlight’s Death and Taxes (www.moonlightbrewing.com) is a dark lager — but its roasty, crisp and malty flavors lends itself perfectly to the olive oil and salt-covered crust and smoky essence of the Pizza Hacker’s (www.thepizzahacker.com) pies. Jeff, the nominal Pizza Hacker and self-described “occasional Pazi (Pizza nazi)”, has built a custom-made portable wood fired brick oven called the FrankenWeber. He wheels it up outside bar or brewery, assembles, and bakes fresh pizzas on the sidewalk. His sauce is from organic heirloom tomatoes and he uses a method pioneered by Tartine for kneading the dough. Best tasted with a full bodied, flavorful pint of brew!

Almanac’s Summer 2010 Belgian golden (www.almanacbeer.com) is made with blackberries and aged in red wine oak barrels for 11 months. Brian Kimball of Magic Curry Kart (www.magiccurrykart.com) wheels around two burners and two rice cookers on his bike, and whips up the most incredibly Thai-influenced curries in front of you with amazing precision. The ingredients are fresh and the spices are delicious. Almanac’s golden ale will add a nice fruity finish to the spicy and flavorful red or green curry. With an eight percent alcohol count and naturally carbonated in the bottle, Summer 2010 will refresh your palette after every sip without overpowering it, enabling new tastes in every luscious bite of curry. Cheers!