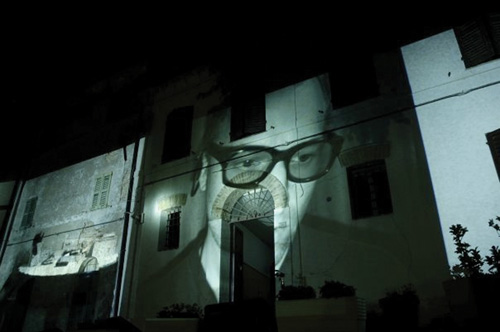 THEATER Last Thursday afternoon, the floor before the stage at Z Space was strewn with dollar-store paraphernalia, neon-colored wigs, and the odd piece of kitchenware. On the stage itself, near the front, ran a long makeshift video screen about four-and-a-half feet high. Immediately behind that, at regular intervals, four small video cameras on thin stands faced the back of the stage. Caden Manson, New York–based Big Art Group’s artistic director, had been leading a workshop all week in performance media techniques for about 15 locals (most of them active in the dance-performance scene) but today they were crafting something that would actually be a part of this week’s much anticipated Big Art Group premiere, The People: San Francisco.

To that end, performers picked through the detritus on the floor and fashioned neo-classical costumes for themselves: a broom brush for a centurion’s plume, pot lids for shields, a colander for a battle helmet, a table cloth for a toga, an incongruous toy gun, a festive pair of streamers on sticks, a black cap with beaded veil, swords, plastic flowers, and other pop neo-classical accoutrement. “If anybody wants a Molotov cocktail, there’s four of them right there,” offers one of the group’s members helpfully.

By the time they had assembled themselves on stage they had become a strikingly photogenic band of miscreants and martyrs, like the crew of the Bad Ship Lollipop. Manson, a 40ish blond with an equanimous mien and contrastingly subdued in black coat and blue sneakers, announces they have ten minutes to produce a narrative tableau in an epic vein. Maybe because most of these folks — among them Evan Johnson, Ben Randle, Honey McMoney, Maryam Rostami, Laura Arrington, Rachael Dichter, and Sara Kraft — have worked together before, this all happens surprisingly on schedule.

Manson — who with a few directorial adjustments soon has them all grandly and neatly materializing on the video screen at the front of the stage — explains to me that the pop-up tableau of civil strife the performers have just concocted will act as one of several backdrops to passages from the Oresteia, the ancient trilogy of plays by Aeschylus, which itself acts as counterpoint to the series of contemporary interviews of random Bay Area citizens that forms a key component of The People.

The results you can see for yourself this weekend, as Florida Street outside Z Space (formerly Theater Artaud) becomes a re-imagined public square where a localized discussion of democracy gets played out in a big way, through massive video projections, personal perspectives, and live performance in a dazzlingly intricate and thought-provoking merger of bodies and images, the epic and the mundane, the spectacular and the quotidian.

Big Art Group’s last appearance in the Bay Area was 2009’s deft and rowdy “action media performance,” SOS, at Yerba Buena Center for the Arts. Founded and led by Manson and executive director and writer Jemma Nelson, Big Art’s distinctive, highly integrated blend of theater and media into something it calls “real-time film” was the basis then for a rousing camp send-up and critique of this culture’s media-immersive materialism and its social ramifications.

The People: San Francisco takes Big Art’s fundamental approach to performance and democratizes it. The fourth installment of a serial project begun in 2007 in Polverigi, Italy (before moving onto Halle, Germany and Salzburg, Austria), The People was designed with two goals in mind, according to Manson. One was to craft a collaborative project that might allow Manson and Nelson greater contact with the communities they’ve been regularly traveling through on Big Art’s annual performance tours. The tradeoff would be some of the precision and expertise on display in shows like SOS for an immediate and interactive bead on a specific locale. In the Bay Area, this contact was managed through three host organizations: Marin’s Headlands Center for the Arts (where Manson and Nelson were in residency a few months ago), YBCA, and Z Space. Through this relationship, the project gathered some 40 hours of taped interviews with 42 subjects (including this writer) who were asked an identical set of questions about terrorism, justice, democracy, and war. (Manson was last week still carefully whittling down those 40 hours to a manageable 16 minutes, but notes the remainder will be archived online).

The other goal was related but more specific and immediate: “At the time we started this, in 2007, Bush was in office and he was always talking about promoting democracy,” explains Manson. “We were touring all over Europe at this time, and we’re wondering: What exactly does that mean, democracy? So we started asking. It’s the first time we’ve asked here, in the United States.”

The timing, coming just after the 10th anniversary of 9/11, is auspicious (if coincidental). As a localized act of public discussion of words like terrorism, justice, democracy, and war, The People reclaims from the centers of power and their diffuse mouthpieces the shibboleths and catchwords that normally act as so many parade floats leading us all down blind alleys, if not over cliffs. Wasn’t this the real discussion we should have had ten years ago? Some did; some tried and were shouted down. This weekend, at least, the conversation continues.