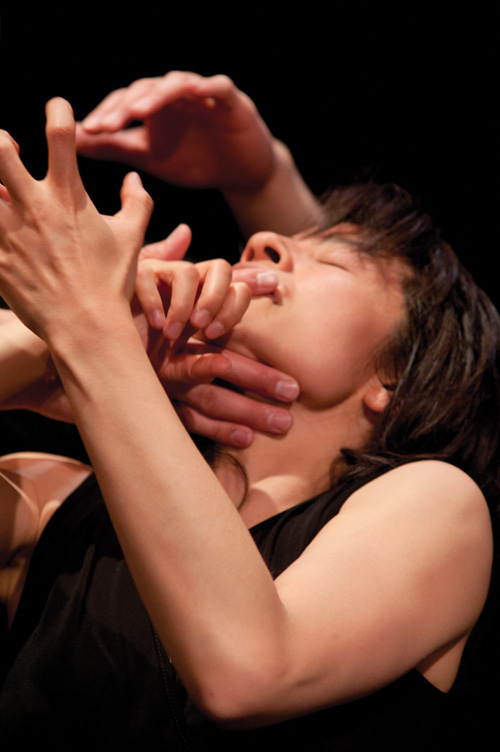 DANCE This past weekend, an unlikely double bill once again proved how fertile the Bay Area soil is for dancers’ imaginations. FACT/SF’s Pretonically Oriented v.3 was steeped in critical theory yet physically grounded. Drawing on local history, Lenora Lee Dance’s Reflections offered a window into self-assertion. While employing Asian American images — martial arts and lion dancing — the work resonated beyond its specific cultural context. Both works were developed during summer residencies at CounterPULSE.

“Pretonic,” a program note explained, refers to the unstressed (“pre”) syllable which precedes a stressed one (“tonic) in a word. Charles Slender used this linguistic precept to fold his rehearsal process into the actual piece. While his trio of exceptionally focused dancers — James Graham, Erin Kraemer, and Catherine Newman — performed variations of material they had accessed through free-writing, we also watched and listened to streamed videos, including Slender at his most slyly professorial, of the rehearsal material that had gone into the making of Pretonically. These layers of information sometimes looked as solid as what happened in real time, sometimes as evanescent as memory floating by.

The idea of conjoining process and product is intriguing. Pretonically could prove utterly absorbing. Watching the trio in one corner of the stage in front of videos taken in exactly the same spot (but depicting different movements) suggested a fascinating sense of simultaneity. Listening to Slender’s voice while his face on the wall clearly spoke different words created a disconnect between two modes of communication.

Toward the end, just as the work seemed to have run its course, the dancers returned and went into a retrograde mode, performing some of their material backwards. It looked as if someone had pushed the reverse button, and they had joined their own selves in a different reality.

At 40 minutes, however, Pretonically could not sustain itself. Once you understood the complex structure, the piece needed to communicate beyond what it became. Like so much conceptual art, the idea behind it often proved more intriguing than its physical realization.

Having said that, the dancers were mesmerizing by the sheer force of their presence. Moving glacially, they inexorably focused on something ungraspable. Perhaps Kraemer’s energy originated from the bottom of her spine, Graham lived off percussive lines, and, though ground-hogging, Newman fixated on the above. Slender is lucky to have dancers as excellent as these; they could run circles around most Butoh practitioners.

Lee’s fine Reflections also benefited from excellent dancers. Translating to the stage the difficulties of retaining or creating one’s identity in an unwelcoming environment is a theme that runs through much of contemporary dance and theater. Lee has previously examined the topic with her Chinese American background in mind; she based 2010’s Passages on her grandmother’s life. In Reflections she strikes a fiercer note as she examines the ferocious, even brutal strength required for self-assertion. A male narrator’s voice movingly personalized the struggle of escaping the bondage of being “the good son.”

Lee made a brilliant choice in enlisting two martial arts group, Kei Lun Martial Arts and Enshin Karate, South San Francisco Dojo. They were the warriors who fought each other in the “cold streets of Chinatown,” but also embodied the ongoing struggle within. Raymond Fong, who is as fine an actor as he is at practicing karate, became Reflections’ everyman. Lee’s mixing of her own choreography with pure martial arts worked well; seeing the real thing onstage (and not often-vacuous “martial arts inspired moves”) was thrilling. At the same these performers looked more nuanced than they might otherwise. Weakest was the choreography for the two women characters, Marina Fukushima as the unattainable dream and Lee herself as a compassionate woman warrior.

Making fine use of a lion dance, including bamboo lion heads that imprisoned, Lee strung together the work’s seven scenes rather straightforwardly. Weaving them more tightly together and including better transitions might strengthen Reflections‘ backbone in future performances.