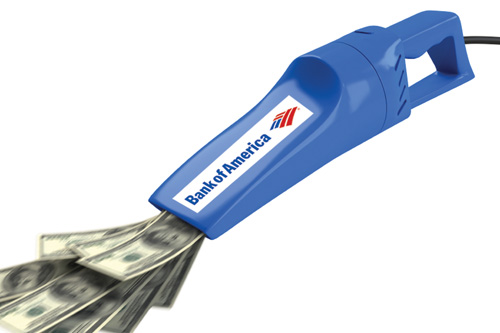 Unemployed San Franciscans are now receiving monthly benefit payments through a mandatory Bank of America debit card. While presented as a benefit to both recipients and the state, the initiative is the latest chapter in a long history of banks profiting off of the less fortunate.

In July, the California Employment Development Department (EDD) began distributing Bank of America debit cards to all California residents who receive unemployment benefits, “in what is one of the largest pre-paid card programs in the nation,” EDD spokesperson Dan Stephens tells the Guardian.

The cards, a result of a recent contract Bank of America won to implement the EDD’s new debit card system, replace the monthly unemployment check residents receive. The cards are also being used for disability insurance and paid family leave payments.

“We wanted a faster, safer, more convenient way for our customers to access their benefits,” Stephens says. But figuring out the new system takes time, usage fees can surface, and complaints have arisen.

“Now I have against my will been forced to become a B of A customer, which I don’t like,” says Cliff Liehe, a part time business teacher at City College who collects unemployment benefits during the summer. “I don’t want to do business with B of A. I hate them, and there’s a lot of staff members that feel the same way, throughout the state, not just City College.”

Liehe says that he dislikes B of A because it has a “corporate philosophy that I’ve disagreed with,” as well as, “terrible customer service and high fees.” Bank of America, the largest bank in the nation, angered the public by receiving a $20 billion federal bailout after buying Merrill Lynch in 2009, in the wake of the financial meltdown from which banks quickly recovered but the average American still hasn’t.

Money can be accessed on the debit card through purchases, unlimited ATM withdrawals, or transferred to a bank account. Liehe opted to have the money transferred to an account independent from B of A, but says he found the process challenging, and the information and instructions difficult to find.

Bank of America is not paying the EDD, but the new system will save the EDD approximately $4 million in initial savings due to decreased paper, printing, mailing, and check processing costs, Stephens tells the Guardian. He remains vague about the EDD’s plans for this money, but does make it clear that the agreement is a “no-cost contract” between parties.

However, Bank of America’s participation is far from charitable. “B of A is covering its costs through fees paid by banks and merchants who honor the cards. Interchange fees are received from businesses that use the ATM network,” Stephens says.

With 1.7 million Californians receiving unemployment benefits and using their cards at ATMs and retail establishments, Bank of America will be receiving a percentage off all this money spent, as well as gaining more than a million new customers, unless recipients have the know-how to have their money transferred to a different bank. This adds up to a substantial potential profit for America’s richest bank.

“We generally don’t comment on the profitability of individual programs or products, but we are pleased to be working with the EDD to provide more secure and convenient benefit payments to its constituents,” bank spokesperson Jefferson George told us.

What consumers don’t consider when using a credit or debit card to make purchases is that with each purchase, the merchant is paying a percentage back to the bank or other credit card processor. Here at the Guardian, for instance, we lose a significant percentage of our ad profits when advertisers pay with a credit card. With MasterCard and Visa, we lose 3.5 percent of the sales amount, and with American Express it’s 4.15 percent, on top of monthly processing fees.

“The issues with credit card charges in general is that it’s all about the small print,” says Hut Landon, Executive Director of Northern California Independent Booksellers Association. As with the Bank of America EDD card, unadvertised fees can occur through usage of debit and credit cards. On top of a base percentage, merchants must pay fees for rewards cards, mileage cards, and are sometimes charged for transactions, Landon explains. There is even a fee for manually entering credit card information instead of swiping it. The debit card fee is sometimes less, but merchants still could be suffering from the EDD’s new system.

“While this may be a good situation for Bank of America,” says Landon, “[for merchants] its definitely not a good deal.”

Joel Bleskacek, co-owner of Potrero Hill favorites Plow and Ruby Wine, tells the Guardian he pays between 1.5 percent and 3 percent for credit card transactions at his restaurant and wine store. That’s a significant amount of money lost with each transaction, money that goes directly to the banks or credit card processors. “For what we’re paying at the restaurant, I could hire a general manager to work if we only accepted cash,” Bleskacek says. But credit cards are more popular than cash at both his establishments. “A vast majority is credit card sales. People don’t seem to carry cash anymore. Same at the restaurant. An overwhelming majority of sales are through the credit card machine.” Credit card company’s earnings quickly add up. “Basically 2.5 to 3 percent of our entire economy is going to credit card companies…,” he says. “Somebody’s making some money.”