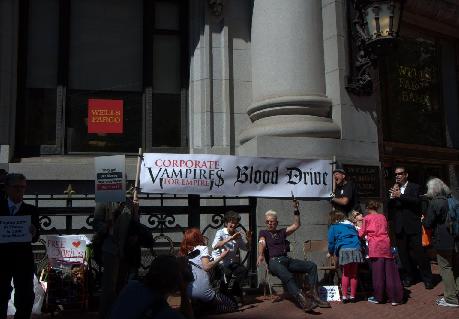 The same week that Warren Buffett gave an anemic Bank of America a $5 billion transfusion of capital, a score of protesters in downtown San Francisco said they know why the economy still sucks: corporate greed.

Demonstrators from US Uncut held a “corporate vampires for the empire” blood drive in front of several of Market Street’s most prominent storefronts August 27, pointing out corporations that haven’t paid their fair share of taxes.

“No more, please no more,” his victim begged, a mock blood transfusion bag attached to her neck.

“More blood, more, you can give more!” laughed a jovial Vlad.

The victim fell to the sidewalk after giving her last ounce of blood to Bank of America.

According to US Uncut, Bank of America, despite having $2.2 trillion in assets, pays less in taxes than an average American household.

“Corporate tax evaders have no shame, they are sucking the economic vitality out of our country,” said protester and vampire hunter Bill Schwalb, who was quick to say he was in no way related to Charlies Schwab.

A crowd on lower Market drew its own picture of the American economy as a pair of women with shopping bags passed by in one direction and a homeless man with a bed roll passed the other way, both stopping a moment to observe the mock blood drive.

Pre-positioned victims at the Apple Store, Wells Fargo, FedEx, and Verizon were bitten and bled dry while waiting in line, to the shock and amusement of customers, while outside the blood donors were administered to by vampire nurses.

“No wonder we’re broke, all these corporations not paying their taxes,” exclaimed an irate passer-by in front of the Apple Store after listening to the group.