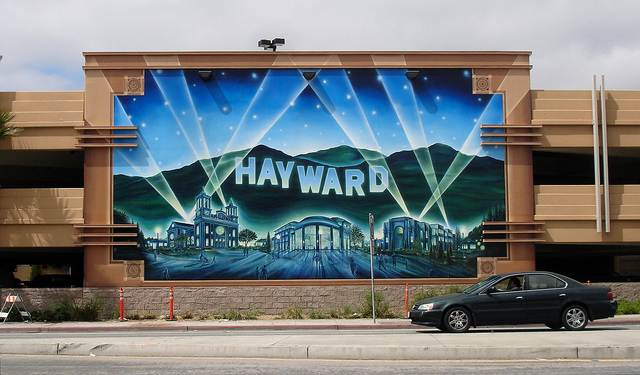 >>HOLLYWARD Hayward got a little more flash this week with the addition of Andrew Kong Knight’s two three-story-tall “Hollywood Meets Hayward” murals, which reimagine the town’s city center landmarks as an annex of Tinsel Town.

>>TWANG AID Twang to the Rescue – a concert for three local musicians displaced by the July 20th Waller Street fire – takes place tomorrow (Aug. 30) at Cafe Du Nord. It’s a mix of bluegrass and country bands coming together to support their fellow musicians: Pam Brandon, Tom Drohan, and Gayle Schmitt. The house at 434-436 Waller was so badly burnt that it was deemed uninhabitable (though luckily, no one was hurt). The fundraiser concert will include live performances by Windy Hill, The Royal Deuces, Lady A and the Heeldraggers, Misisipi Mike’s Midnight Gamblers and more. [Via Haighteration]

>>WE SWEAR WE’RE DONE TALKING ABOUT J-POP SUMMIT AFTER THIS We thought that just watching ourselves on camera in front of the throngs in Japantown’s New People mall was nerdy enough during the Japanese pop culture fest this week, but come to find out that the image on the flatscreen we were mugging for was actually connected to a livefeed leading to a Japanese website. Wait — so all those typed messages (“cowgirl!” and “we will get married now!” figured prominently on our turn) were from actual people on the other side of the world. Hope they enjoyed our manic fist-pumping — and thanks a lot, Niconico.com. But another fount of cat videos is always appreciated.

>>THANKS FOR THIS, CORNELL UNIVERSITY Two AI bots decide to chat with each other, and what do they do? They argue — or rather, they contradict each other. Then they talk about God. If this is what the world is coming to, then John Cleese predicted it 45 years ago.