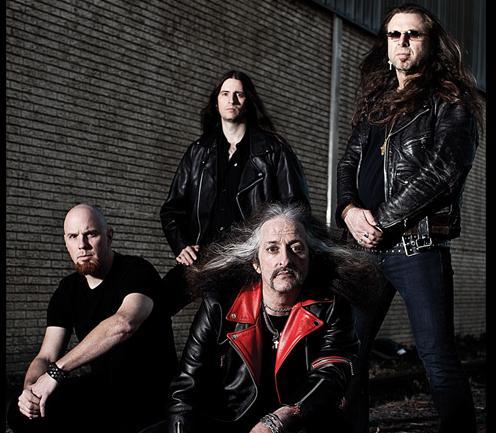 Pentagram has had more members than many bands have songs. You could see the band three times and see 10 different people, with singer Bobby Liebling and his spooky, howling voice the only constant. But when Liebling takes the stage in San Francisco August 16, guitarist Victor Griffin will be beside him. Over the course of 30 years, their relationship has endured enough hardship and heartbreak to last a dozen lifetimes. When they stand together onstage, however, nothing can stop them.

Liebling, who founded Pentagram in 1971, grew up an only child in D.C.’s tony Virginia suburbs. When a high school guidance counselor suggested he take some time off before starting college, the goggle-eyed vocalist threw himself headlong into the two activities that would come to define the rest of his life: music and drugs.

Like Liebling, Griffin embarked on his rock ‘n’ roll career right out of high school. With friend and bassist Lee Abney, he had founded an outfit called Death Row, which gave voice to his thunderous, Sabbath-inspired guitar playing. In 1980, needing a drummer, the pair moved to D.C., where they linked up with Joe Hasselvander. The trio then began searching for a singer; with some trepidation, Hasselvander mentioned Liebling. He played Griffin a seven-inch single featuring two Pentagram classics: “Livin’ in a Ram’s Head” and “When the Screams Come.”

Reached by phone from his home in Tennessee, Griffin remembers that moment: “I was just blown away. To this day, that’s still one of my favorite recordings of Bobby.” Despite Liebling’s talents as a singer, however, Hasselvander had his doubts. “I was pretty much all for it,” continues Griffin, “but he went into a little more detail. He’d played with Bobby around ’78, and Bobby had blown some deals because of the drug use.”

Death Row decided to take a chance, inviting Liebling to try out. “We hit it off right away,” Griffin recalls. The guitarist had written lyrics for his songs, and rough vocal melodies, but he told Liebling to “just take it and do your thing with it.” The results were impressive. “What I can remember from that audition is just smiling from ear to ear,” Griffin says with a chuckle.

The pair formed a friendship and musical relationship that would last for three dramatic decades. Liebling was notoriously difficult to get along with, combining prickly pride and erratic, drug-induced behavior, but in Griffin, he found himself a partner, both in music and in crime. “Bobby and I have never had a problem with each other,” the guitarist allows. “We kind of share a weakness for drugs and alcohol. We kind of fed off each other.”

Though the quartet initially performed as Death Row, it soon adopted the Pentagram moniker, losing two members, Hasselvander and Abney, in the process. Liebling and Griffin became the core of the band. But though they were producing some of the best Pentagram material to date, the duo never made it far outside the D.C. area. “Back in the olden days, we just didn’t really care,” says Griffin, ruefully. “It was the whole sex, drugs, and rock ‘n’ roll attitude.”

Throughout the 80s and early 90s, the drugs continued to exact their toll. “We were our own worst enemy,” admits Griffin.

“I made a lot of bad decisions. I regret the ones that I made that hurt people. Especially people that I loved,” Liebling adds.

In 1996, after a seemingly endless litany of acrimonious disputes, Griffin quit the band. He eventually succeeded in ending his long-running addiction to drugs and alcohol, emerging in 2000 at the head of Place of Skulls, a new band heavily informed by the guitarist’s embrace of a fervent Christian faith.

Liebling was left, as he had been at many times in his career, with a band name, a collection of songs, and not much else. Even his storied voice was beginning to decay, thanks to nearly forty years of heroin and cocaine abuse. It wasn’t until he met his now-wife, Hallie — 27 years his junior — in 2006, that he was finally able to get clean. When guitarist Russ Strahan quit a patchwork version of Pentagram the day before the start of the band’s 2010 tour, Liebling called Griffin.

Now sober, the guitarist was interested, but skeptical. “I wasn’t sure I believed it. I’ve heard every story Bobby’s ever had to tell. I know him as [well] — or better — than most people.” Still, Griffin agreed to rejoin the band on the condition that Liebling remain clean.

Since that fateful decision, Pentagram is arguably more secure and more successful than it’s ever been. In April 2011, the band released the thunderous studio album Last Rites. On the road, Liebling and Griffin look out for each other, supporting each other’s efforts to stay sober. “There’s a lot of people out there who would like to screw you up,” explains the guitarist. “I think that both of us being on the same page with all this stuff is definitely a help — to know that you’ve got a brother there with you, who’s gonna back you up.”

Liebling agrees. “The band is stronger when we are together,” he says. “I am so lucky to have him back.”

When asked if he thinks Pentagram might finally be getting a second chance, Griffin is cautiously optimistic: “Sometimes it seems like we never really got a first chance. We’re trying to take advantage of it now, and make better decisions than we used to make back then. Live better lives.”