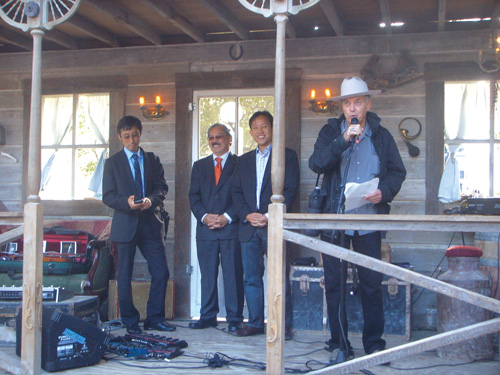 By forming a new nonprofit organization and forging partnerships with political and business leaders, the heads of the company that stages Burning Man say they are hoping to secure and expand the long-term future of the event and the culture that it has spawned, particularly here in San Francisco.

The Burning Man Project (see “The future of Burning Man,” Aug. 3) was officially launched on Aug. 5 in United Nations Plaza, with speeches by Mayor Ed Lee, Board of Supervisors President David Chiu, Burning Man co-founder Larry Harvey, and others, addressing a large and colorful crowd from the Front Porch, an art project that looks like a country shack from the 1930s.

“Welcome home, fellow burners,” declared Lee, who doesn’t attend Burning Man but whose office has tapped into the artwork and cultural cache of those who do, using it to decorate Market Street and sell its vision of rejuvenating the area with a mix of corporate tax breaks or artistic initiatives.

“Burning Man has been a wonderful contributor to our central Market cultural district,” Lee said, going on to name a number of other businesses that are involved. “There’s not going to be a storefront available because they’ll be filled with art and people.”

Chiu — who partnered with Lee to push tax breaks for Twitter and other businesses that move to Mid-Market, yet is now his opponent in the mayor’s race — offered a similarly optimistic vision. “San Francisco has been a beacon to the world for creativity and innovation,” he said.

Chiu praised the value that Burning Man places on experimentation, “and I’m not just talking about magic mushrooms,” he added, sending a murmur through the crowd. He even gave a nod to the event’s storied powers of transformation. “Mayor Lee and I are thinking about going up [to Burning Man] this year so we can resolve all the issues in City Hall out in the desert,” Chiu joked, although he did tell us that he is considering attending this year. Sup. Eric Mar is planning to attend Burning Man for his second time, and Sups. Malia Cohen and Jane Kim are said to be considering going as well.

“Our goal is to bring the culture of Burning Man back to the world,” Harvey told the crowd. “Working with the city of San Francisco, we can do many things.”

So far, most of those things are vaguely stated goals coupled with appeals for financial donations and volunteer help, which Harvey said they will need a lot of. Once they get rolling, Harvey said they aim to have a big impact on society.

“We don’t want to merely decorate the city’s main street. That would be superficial. We want to change lives,” Harvey said.

The new nonprofit grew as much out of infighting on the LLC board as it did Harvey’s high-minded goals (see “Man on the move,” 4/5/11), but many burners have long argued that it’s time for a leadership transition.

“I’ve been working to get to this point for 15 years,” board member Michael Mikel told the Guardian. He is one of Burning Man’s three main early leaders and someone who helped form Black Rock City LLC in 1996 after the departure of John Law, who was instrumental in establishing the event in the Black Rock Desert.

And what is “this point” that he referred to? “This community can go on beyond the life of its founders,” Mikel replied.

To begin the six-year process of turning full control of the event and Burning Man trademarks over to the new nonprofit, the LLC chose a board of familiar faces that it has worked closely with before.

The new board members are Christopher Bently, a business person who owns the Bently Reserve, an event space popular with burners; hotelier and writer Chip Conley, CEO of Joie de Vivre Hospitality; Mike Farrah, a former top adviser to former Mayor Gavin Newsom and other SF politicians who now lives in New York City; Burning Man attorney Terry Gross (aka Lightning); film producer Chris Weitz; his wife, Mercedes Martinez, a former teacher and performer; Kay Morrison, who works with nonprofits in the Seattle area; Jennifer Raiser, a business person and blogger for sfwire.com; longtime burner Rae Richman, who runs Rockefeller Philanthropy Advisors’ Bay Area office; installation artist Leo Villareal, a founder of New York’s Disorient sound camp; and David B. Walker, who has run museums, served as dean of an art school, and worked in investment banking. They join the six current LLC board members — Harvey, Mikel, Marian Goodell, Harley DuBois, Crimson Rose, and Will Roger — on the 17-member board, although the new members will initially serve terms of just one year.

“I think Mid-Market and the Tenderloin will be an arts district like nothing we’ve ever seen,” Conley, whose company headquarters and several of its 13 San Francisco hotels are located in the area, told the crowd. “Today is the birth of the Burning Man Project and our goal is to make Burning Man real around the world … and around the year.”

Or, as Richman told us, “I want people to not have to go out to the desert to have that opportunity for self-expression and creativity.”