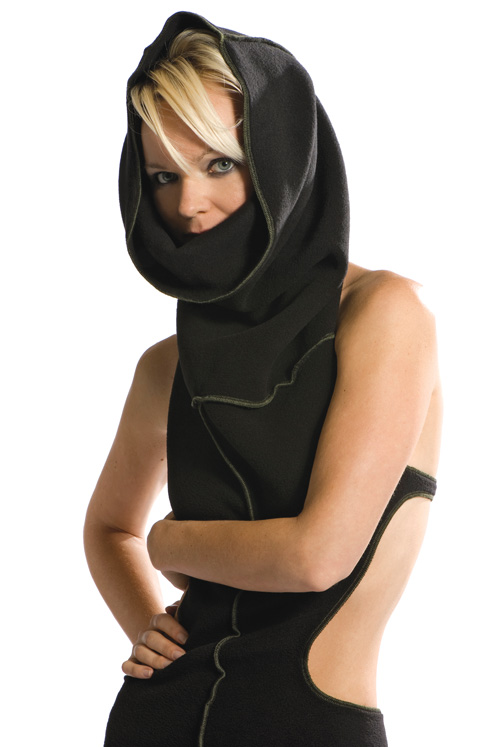 PLAYA PREP In Miranda Caroligne’s Mission District sewing studio, there is a dress dummy covered in used Carhartt remnants that are being reborn as an asymmetrical mini-dress. It’s a project that the designer, whose fanciful style has made her a popular check box on pre-Burning Man to-do lists, is working on for Margaret Long, a member of the Flaming Lotus Girls fire art collective. Please note: no fun fur or tribal accents are visible on the soon-to-be-dress.

These are the rush months for Caroligne and other burner designers, like SF-based Silver Lucy and Tammy Hulva of Tamo Design, prime time for helping burners to realize their sartorial fantasies. Caroligne makes form-fitting, whimsically-stitched fleece jackets that hang by the bundle throughout her bright creative space, and one-size-fits-all boot covers made from old suit sleeves. But she says that for her custom-made creations, she prefers a little vision in her clients. In other words, please don’t come to her for furry boots and glow sticks.

“I tend to speak out against that,” she says of trends towards the homogenization of playa culture. “I only design for people if they have a very clear vision of something they want to express. I consider myself the conduit to making that happen.” When people come in for the standard Mad Max raver treatment, she sits them down to clarify what about the look resonates with them.

Burning Man fashions have evolved over the last quarter-century, with the old emphasis on crazy DIY costumes eventually morphing into distinct burner fashion aesthetics, such as the feather-and-leather look popularized by the El Circo camp and the late designer Tiffa Novoa and featured in SF stores such as Five and Diamond.

It is perhaps indicative of the spread of Burning Man culture that Caroligne’s potential clients sometimes ask for the same style. It’s been popularized by a hundred wholesale websites — fun fur bikinis and (particularly popular in the Bay Area, according to the designer) the “dark leather and feather tribal look that’s mass produced in Bali.”

Stores from SoMa to San Rafael to New York advertise themselves as one-stop shopping venues for burner-fied fashion, and numerous expos make similar claims here in the Bay Area — Aug. 14’s second Prepare for the Playa street fair of the year being one of them.

Independent designers are at creative odds with the uniformity that is developing in some camps — but they’re also concerned with the sustainability of the designs, which are often imported and disposable. “That disgusts me,” Caroligne says. “A lot of that stuff is very M.O.O.P.-y.” (M.O.O.P. being the burner acronym for to-be-avoided-at-all-costs “matter out of place,” or any waste that could harm the playa’s natural ecosystem).

It wasn’t always this way. Before the turn of the 21st century, it would have been difficult to determine the Burning Man uniform. People made clothes for themselves and friends, or they wore regular clothing-redux in the hot Nevadan sun. Ironically nowadays, Caroligne says, “I’ve heard many people talk about walking into a Burning Man party and feeling judged (because of what they were wearing).”

She’s still a little unsure of the implications of working as a for-profit businessperson within a nonprofit culture. But Caroligne tries to mitigate the disconnect by doing pieces for busy artists that contribute to the Burning Man community (she was particularly excited to have costumed Burning Man board member Marian “Maid Marian” Goodell for the ritual burning of The Man one year, and be-suited Glitch Mob’s Justin Berreta for another).

In a previous incarnation, Caroligne was a physical therapist. When she began her fashion career, she did so with an eye toward her clothing’s effect on individual body dynamics. She created weighted coats that swung appealing when their owner strode across dusty Black Rock streets, sexy dresses made of cozy fabric that could be doubled around the face for warmth or privacy. At times, her clothing can even reflect the party philosophy of the wearer– she often asks customers whether they’d like the softest fabric of their new wardrobe item on the inside or outside. “Do you want to feel it or do you want other people to feel it?”

She believes what one wears at Burning Man can be empowering. “We’re finding your superhero self. What does your superhero look like?” is a common topic of discussion in initial consultations.

Judging from the length of her in-process dress’ skirt, Long’s superhero is sultry — but also here to get some work done. An intact overall strap has been left to speak for itself on the right shoulder, and below, grease-stained Carhart pieces have been left whole so that Long’s customary wrench loop will continue to ride comfortably on her right hip. Caroligne is attempting to create an outfit that expresses the wearer.

“During my 12 years at Burning Man, I’ve seen the change from self-made to high fashion,” says Hulva, whose Tamo Design clothes “originate from ideas about making my wardrobe more functional and fashionable on the playa.

Hulva makes luxe faux fur that doesn’t shed M.O.O.P. like the cheaper stuff you’ll find at many a mall store. Her popular “Baroness” jacket is late-night-early-morning playa crawl dream wear, with a hood to hide in, fabric that gives, deep pockets to store party essentials — and you don’t have to be so glum about covering up your LED tube top: it’s sexy, to boot.

When pumped about hot playa trends for 2011, Caroligne and Hulva were loathe to cite anything too specific (though Caroligne expressed her enthusiasm for “playful 1980s revival styles”), rooting instead for individuality.

Burning Man fashion is about “a platform for self-expression,” according to Caroligne. Clothes, she says, “are the primary way that people can express themselves,” accessible even to those that specialize in other forms of playa magic, like Long.

But they did note a general trend arch over the festival’s history. The past of Burning Man lay in DIY clothes, self-made everything. The present has brought professionally-made garb, and the mass accessibility of a certain playa “look.” The future? Hulva hopes it holds “a trend to be more sustainable and practical — in addition to keeping things light and fun.”

She’s working on it. On Sunday, Aug. 7, Hulva is organizing the Haute Pool Show, a gathering at the Phoenix Hotel of 20 local, independent designers selling their high quality, playa-ready belts, vests, and accessories. It’s a follow up to her last event — July’s Beyond the Fence at Mighty — and both cater to those preparing for their journey to Black Rock City.

Only these aren’t clothes you’ll be reserving for the desert. Sure, they’re whimsical, but Burning Man fashion — particularly here in the Bay Area — really is stepping beyond the playa fence. The festival’s recent sell-out of tickets and an expected crowd of around 52,000 underline the fact that its impact is growing, and style cues picked up from the playa may just be finding their way into year-round usage.

“Versatile styles are hot this year,” says Hulva. “Burning Man fashion has really migrated into the everyday self expression, so people are buying things they can wear on the playa and back home.”

PREPARE FOR THE PLAYA

MIRANDA CAROLIGNE’S MUST-HAVES FOR THE PLAYA

A good shade hat and/or parasol

A warm coat (“that you’ll have fun with”)