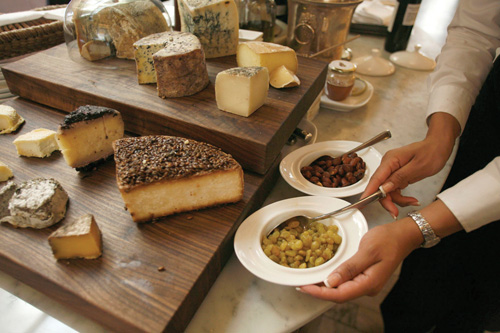 DINE In the little gathering of restaurants on the 200 block of California Street deep in the Financial District, Perbacco is one of the middle children, at least physically. Mid-block positions can be awkward for restaurants, since your would-be customers are likely to have to do a bit of searching for you instead of finding you in mighty command of some conspicuous corner. On the other hand, if your nearest neighbors are Michael Mina (née Aqua) and Tadich Grill, the foot-traffic factor could tilt in your favor.

Perbacco, which turns five later this year, is relatively narrow and deep, which is not atypical of mid-block spaces. Within those friendly confines it does offer a few points of topographical interest, including a mezzanine and, at the very rear, an open kitchen that redefines “open kitchen”: a kitchen so open that it has no physical barrier or marker to separate it from the rest of the restaurant. It reminded me in an odd way of those federal prisons without fences — the so-called Club Feds — where Michael Millken and the other high-finance hucksters of the 1980s did their time. It was odd to glance back there and see young chefs just milling around. Even in a star-struck culture like ours, there can be such a thing as overexposure.

It would also be fair to say that the design scheme emphasizes earth tones.

“It’s brown in here” was a pithy observation that reached me from the pithy observer across the table. Some cream tones too, yes, but still. One imagines that the grand men’s clubs of old London, White’s, and the Atheneum, among others, must look something like this inside, not that I’ve ever managed a peek.

If you’ve been to Italy, particularly in the north, you’ll probably agree that Italians eat more meat than is generally supposed, and in this sense, chef-owner Staffan Terje’s menu does reflect a profound Italian aesthetic. (Its principal influences are from the northern regions of Piemonte and Liguria.) The kitchen turns out its own salumi, and an $18 plate of it (the small version) is most impressive in range, flavor, and sheer heft. If you open with this, you should plan accordingly for what you want to follow, because you don’t just get a couple of crostini smeared with paté and some cornichons. You get, instead, a sizable plate dizzyingly arrayed with such treats as testa in cassetta di Gavi, pancetta, several types each of lardo and salame, and — for a bit of crunchy acid — a bouquet of pickled cauliflower florets.

The passion for meat, in particular for cured meat, even insinuated itself into the salads, where we found a witty reimagining of the classic cantaloupe with prosciutto in the form of ripe peach slices ($12) set amid baby lettuces with flaps of smoked goose breast that could easily have passed for speck or pancetta affogata except for their color, which was more of a telltale red. The salad was dressed with a stone-fruit vinaigrette, but this salad was that rare thing, a salad that, laden with juicy ripe fruit and pungent flesh, would have been fine with no dressing at all.

Yet more meat turned up in the pasta courses (many interesting and unusual shapes here), in the form of short-rib ragu ladled over pappardelle ($17), the wide ribbons that look like fledgling lasagne. The ragu was intensely earthy, and horseradish shavings brought some bite, but I did question the addition of a roasted cipolline confit, whose almost jelly-like texture and sweetness seemed to me to disrupt the harmony of the dish. So much of the brilliance of Italian cooking has to do with simplicity — i.e., resisting the temptation to add ingredients and omitting them instead — and this dish would have been better with no onion confit.

Actual short ribs ($24) were also available, cooked long and slow (stracotto is the Italian word), given a bone-marrow crust (rich!), and plated with pea tendrils, chanterelle mushrooms, and more cipolline onions, which for some reason did not wreak the havoc here they did with the pasta and actually might have helped balance the richness of the bone marrow.

The dessert menu, like its savory counterpart, reflects a surprisingly friendly pricing scheme. Everything is $8, except for the sorbetti ($7) and the panforte ($3). And the preparations are complex enough so that you feel you’re actually getting more than one thing. For example, a strawberry semifreddo (a flat pink disk with the consistency of sherbet kept in a too-cold freezer) was festooned with crumbles of pistachio cake and tumbles of zabaglione, the marvelous — and marvelously simple — concoction of egg yolks whipped in a bain marie with sugar and some kind of sweet wine, usually marsala, but flat champagne works well, too. The zabaglione had a faint green sheen; had it been doctored with pistachios, like the cake? Pink plus green beats brown every time.