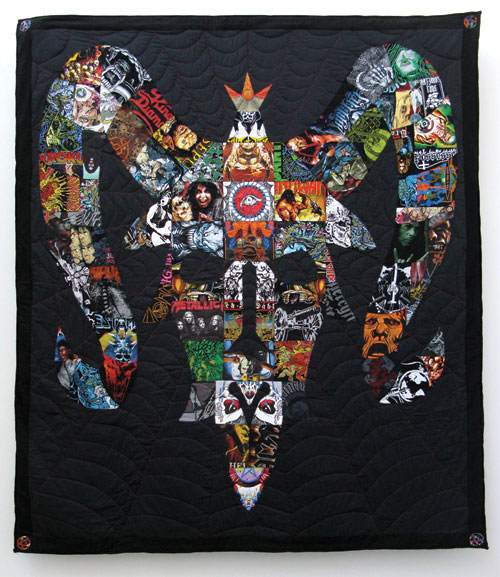 HAIRY EYEBALL In his review of the latest Venice Biennale, Boston Globe art critic Sebastian Smee threw down something of a gauntlet when he wrote, “The received wisdom is that contemporary art is mostly about ideas. In truth, however, it’s mostly about gestures.”

Smee’s generalization offers plenty to chew on and plenty to disagree with. For starters, it implicitly presents one of art’s oldest chicken-egg scenarios — one that was muddied decades ago by Marcel Duchamp and later Conceptual Art — as a false choice between thought and spectacle, sustained engagement and capricious showmanship.

But it can also be read as a pretty spot-on diagnosis of the current moment in art — at least, as refracted through the fun house mirror of the Biennale — in which having a gimmick, however thought through or critically engaged, or bringing out the big guns guarantees attention in an increasingly crowded market already clogged with gimmicks and big guns.

Bay Area Now, Yerba Buena Center for the Arts’ triennial snapshot of local creative culture, is the closest thing the Bay Area has to the Biennale and also, thankfully, the furthest thing from it. Still, Smee’s comment provides a useful rubric for navigating its sixth installment, which is full of gestures (some well-executed, others not so much) that at times overshadow the ideas (some half-baked, others worth mulling over) they’re meant to put across.

Visual art curators Betti-Sue Hertz and Thien Lam have pared the number of participating artists, now augmented by art collectives, to a tidy 18. This smaller range gives each participant’s work — most of it created especially for BAN6 — a little more breathing room, although the exhibition’s layout isn’t exactly conducive to following the connecting threads (environmentalism, geopolitics, Americana, and local subcultures, among other topics) unspooled in their curators’ statement.

Tammy Rae Carland’s wonderful series of work about the self-effacing price female comedians have had to pay (and continue to pay) to get a laugh is the first thing you see when you enter. But her photographs of local comediennes in ambiguous forms of self-presentation, text pieces that isolate the painful punch lines of Phyllis Diller, Joan Rivers, et al., and banana peels cast in brass are spread between two floors: a confusing arrangement if you don’t directly proceed up the stairway next to which Carland has created an elegiac installation that, save for the large helium balloons suspending a porcelain microphone, is also easy to miss.

YBCA’s main gallery is another case in point: it’s a good site for large installations that pack a lot of visual impact (think Song Dong’s Waste Not or Nick Cave’s soundsuits), but can pose a challenge for arranging groups of smaller-scale pieces coherently. It’s too bad, then, that the three box-like structures housing works by Brion Nuda Rosch, Rio Babe International, and Chris Sollars cut diagonally across the space like a semipermeable wall of shipping crates. Incidentally, these installations are also some of BAN6’s least compelling pieces.

Harder to ignore is Ben Venom’s See You on the Other Side, a giant quilt whose centerpiece motif of snakes sprouting from a human skull, all made from old metal band T-shirt scraps, only becomes visible as your eyes adjust to the surrounding negative space. It is, in a word, awesome. But it’s also a canny fusion of craft traditions already present in metal subcultures — the quilt is flanked by two cut-off embroidered and studded denim vests, familiar handmade vestments of the tribe — with an older American precedent.

Quilting is also taken up in Suzanne Husky’s nearby Sleep Cell Hotel installation, a collection of three potentially inhabitable nest-like wooden structures that resemble porcupines, replete with quilts covered in radical slogans. A goofy infomercial touts the dwellings as the next development in politically conscious eco-tourism, while a hand-drawn sign warns of their structural unsoundness. Husky’s isolation tanks take the piss out of radical chic and backpackers alike while questioning the impact even the most well-intentioned and off-the-grid 21st century nomads leave in the wake of their habitats beyond carbon footprints.

That question is reframed in more ambiguous terms by Ranu Mukherjee’s wonderful series of drawings and watercolors of “nomadic artifacts” located in YBCA’s smaller second gallery. Each work is based on an image or stories sent to Mukherjee by friends and associates that reflect their conception of the nomadic, a process of translation neatly embodied by the blank fields against which a camper van or an ancient Egyptian temple is depicted. Isolated from their original contexts, these purloined postcards from the edge form an ongoing archive of mobile existence (the call for submissions is still open).

In many cases at BAN6, ambition tends to exceed execution, but the results — as with Tony Labat’s large neon marijuana leaf that, seen from the outside, makes YBCA’s Mission Street lobby look like the city’s chicest pot dispensary — still pack a punch. Whether that is enough, or enough for a “moment in time” group survey such as this, is another question.