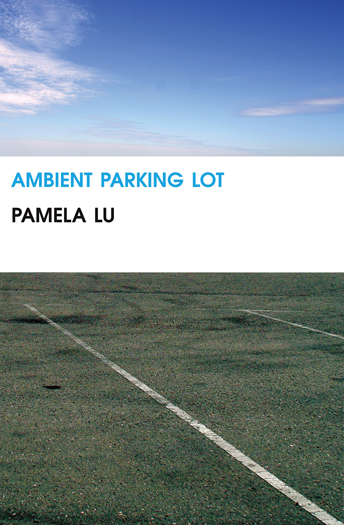 Ambient Parking Lot (Kenning Editions, $14.95) is a 187-page book about one band’s quest to capture the world’s most perfect ambient noise in a parking lot. Wait, don’t go away! It’s great … I swear. Author Pamela Lu’s novel follows the Ambient Parkers, a fictional collective of musicians and artists, as they rise to heights of fame or alternately cower under the weight of their shortcomings.

Their peaks and valleys shape a familiar refrain if you’ve ever been in a band; Lu uses the Ambient Parkers (they are otherwise anonymous) as a foil by which she is able to draw the whole business of the so-called underground art establishment under her perceptive and witty lens. The performance artist who joins the Ambient Parkers for a night of experimental dance, the respected radio DJ who rebukes their creative advances, and perhaps most impressively of all, us, the fickle and demanding public: these are just a handful of the cogs in a not-at-all-well-oiled (and certainly well worn) machine.

In short, Ambient Parking Lot is Lu’s love song to the independent artist and the scene that he or she is a part of. He has no patron, no propulsion other than a curious drive to produce, to create. He is filled with doubt, wracked by neurotic compulsion. Grand success eludes him, but small victories are hard fought and well earned. Financial stability is not a goal but a hurdle, nagging at him from the periphery. He is the suburban anti-hero of the 2000s, driven but erratically so. Basking in the afternoon sun between empty factories and foreclosed homes, he has learned to love his blighted environment and revel in its hidden beauty.

And so, for all the humor in Ambient Parking Lot, for the subtle mocking jabs at the artists’ egos, there is an equally strong current of admiration. The Ambient Parkers are sincere, almost naively so, unwilling to “play the game” … but willing to try it out. They are somehow self-important and self-deprecating at the same time. They are every independent band as they confront the specter of commercial and critical success, as they grapple with their image and then grapple with consciously grappling with their image. It’s dizzying, really, and hilarious.

Lu succeeds tremendously in capturing the tribulations of the artist with tenderness and a ‘get-real’ attitude that keeps Ambient Parking Lot from turning into propaganda for the underground and reminds us that everyone is human, even the people we admire (or loathe) on stage, or lurk in the corner at an after party.