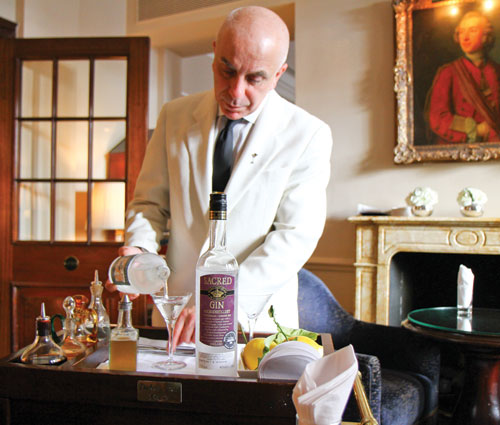 >>View an extended version of this article at Virginia’s site, the Perfect Spot.

TRAVEL TALES Twenty-five bars, from Notting Hill to Hoxton. I did some serious exploring when I splashed down in London’s famed cocktail scene this June, from cutting-edge experimentation to dive-y comfort, legendary classics to just-opened destinations. I sipped with cocktail luminaries like Nick Strangeway, imbibed incognito at world famous haunts, and raised my glass at good old-fashioned pubs. Here are some of my experiences, served neat.

A SHOT OF INNOVATION

It’s true: there’s some cutting edge stuff going down in London Town. Among them, 69 Colebrooke Row is considered a standard of experimentation, if not mad science, with drinks pioneer Tony Conigliaro at the helm. A visit to its test lab, Drink Factory — “a collective of like-minded bartenders and artists” — was a revelation. There, unexpected flavors are subjected to rigorous R&D via a dazzling collection of lab equipment ranging from sous vide thermal immersion circulator to tube-tangled “vacuum machine.” (Press comparisons of Conigliaro to Willy Wonka have grown cliched but remain effective.).

By no means are Conigliaro and crew’s concoctions fussy. When you taste a rhubarb gimlet, for example, you get the pure tart of fresh rhubarb stalks, their essence extracted via centrifuge. This gimlet — among the best cocktails I encountered in London — may have had a complex origin but it contained a mere three ingredients: rhubarb, Beefeater gin, and a twist of grapefruit.

Another standout was the spanking new Worship Street Whistling Shop. I chatted with bar manager Ryan Chetiyawardana, formerly of Bramble Bar in Edinburgh and 69 Colebrooke Row. Candlelight glowed warmly against dark wood fixtures and a classic organ with more than a hint of Victorian influence in the basement bar’s decor. Chetiyawardana showed us their Rotovap (for distilling at low temperatures) in a tiny, glass-walled “lab.” Here the Whistling Shop elves create bitters, tonics, and ingredients like “walnut ketchup” (port wine, green walnut, chocolate, saffron, and spice).

Some of Whistling Shop’s profoundest joys came from a row of mini-casks behind the bar where an intriguing mix of ingredients are infused into a range of spirits. Though the barrel-aged cocktail craze has swept the world, I’ve yet to see this range at any one bar. WS2 “Whisky” ages Balvenie with beech, maple, and peat syrup in new oak. WS2 “Genever” captivates with Tanqueray gin, Caol Ila Scotch, green malt, and spices, aged in sherry oak. Wherever you turn at this bar, you’ll find the unusual, while the staff and vibe are comfortable, classy. Just the kind of place I’d love to have in my own city.

Hawksmoor is the territory of visionary mixer Nick Strangeway, where friendly bartenders continue his tradition of well-crafted drinks. I was delighted to order from a menu loaded with classic juleps, cobblers, punches. St. Regis mint julep is a 1930s new Orleans recipe: rye whiskey and Cuban rum form the base, while homemade grenadine rounds it out. it comes, wonderfully, in a traditional julep cup (atypically caked in thick ice, however) with a vivid garnish of berries and mints, tasting like a proper southern julep. compared to other smoke-infused cocktails, I would have liked to taste more tobacco in the Hawksmoor’s tobacco old fashioned. But with rye and house tobacco bitters, the drink was still beautifully executed.

AND THEN … NOT SO MUCH

It’s incredible how many acclaimed London menus are still littered with flavored vodkas and fruity, chichi, or just plain played-out drinks. I witnessed entire groups of friends each with a mojito in hand in bars that carried extensive, fascinating menus.

The 1930s tunes and classy, basement vibe of Nightjar worked in terms of a speakeasy-themed bar. But clientele appeared to be not a day over 18, making the place feel like “kindergarten just let out,” as my companion the Renaissance Man said. Fine — but the flamboyantly garnished yet crappy-tasting drinks really sank the place. Despite a beautiful menu, “signature” cocktails tasted of juice (Pedro Pamaro) or smoky tea (Name of the Samurai) but not at all of alcohol. The only win was a surprisingly good canape platter. For a mere 6 pounds, one can get six tasty, generously-sized canapés until 2 or 3 a.m. This is significant when you realize how impossible it is to get even a bite to eat in London’s hippest neighborhoods after 11 p.m. (just try!)

My expectations were high for my visit to the lauded Artesian Bar at the Langham Hotel. The gorgeous, airy room is illuminated with Asian-meets-French decor, romantic and intimate. An extensive menu hosts a brilliant flavor-profile map to help choose a cocktail to suit your mood. All seemed to confirm how special this place was. And then …

Yes, I was prepared for pricey cocktails (15 pounds) but not for the menu to read better than it tasted. The standout was Cask Mai Tai, a cask-aged Mai Tai, deeply spiced and autumnal, with tart lime and fresh mint. However, Silk Route, an intriguing milk punch of Batavia Arrack, Pimento Dram, and Elements 8 Platinum Rum was bland with a funky aftertaste. I yearned for its sun-dried roasted coconut and lime elements to shine through. Alexino sounded luscious: Ron Zacapa 23 Rum shaken with whipping cream, red bean paste, and aromatic spices. I tasted little red bean or spice, while the bean paste sat sludge-like at the bottom of the glass. Granted, red bean is not an easy ingredient to mix into a drink. But at roughly $25 a cocktail, each should be exemplary.

I’ve saved one of the best for last: Duke’s. This elegant, small hotel bar is a temple to the martini. I could see why it was frequented by James Bond author Ian Fleming and other martini lovers over the years. I cannot recall a more perfect martini. Head barman Alessandro Palazzi is among the most delightful, consummate bartenders I’ve had the pleasure to be served by. As he wheeled out a trolley laden with olives, lemons, ice, and gorgeous barware, he immediately impressed with his expert gin knowledge.

Asking where we were from, he launched into a rapturous account of his love for San Francisco gins 209 and Junipero, saying he’s long been extolling the glories of Junipero. Well-versed and intimately acquainted with the best gins the world over, he dropped distiller names like “Arne” and “Fritz.”

I asked for London’s Sipsmith gin. Alessandro proceeded to bring out a sample of another locally-produced, small distiller Sacred so we could compare side-by-side. He mixed our martinis to icy perfection, gin’s bite tempered with the refreshing cool of dry vermouth and a hint of lemon. This tiny, quiet haven remains among my favorite memories of London, an impeccable martini immaculately served lingering in my mind.