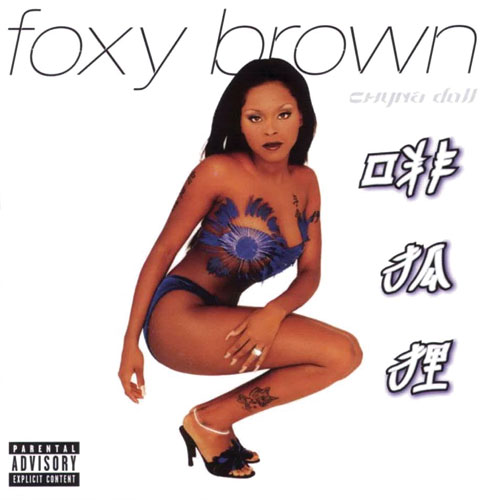 SOUND TO SPARE Sweating in that crevice behind your knee? Notice more mesh tops in the Castro than usual? Or maybe you’re like me, pretending it’s Wimbledon but really just stinking up the tennis courts at Dolores Park. It seems the Bay Area is actually being blessed with some unusually above-average temperatures this summer. But even when the fog inevitably rolls back in, sticky-hot summer jams don’t necessarily have to be about weather. They can be a mentality. So allow me to stroll down Memory Lane with a fitting album for these should-be-sizzling times.

Chock-full of lyrical wit and endless one-liners, 1999’s Chyna Doll (Def Jam) by Foxy Brown is the downright filthiest album of all time. Brown (only 19 at the time) had me inappropriately quoting her ill flows all summer long. Stuff like “MCs wanna eat me, but it’s Ramadan” or “Gimmie some room, all I need is some dick up in my womb” are among the most graphic, but rate as some of my favorites. I probably appreciated them even more back then, when I was equally as young, angsty, closeted, and still living at my parents’.

The Brooklynite’s brazen delivery of FCC-unfriendly rhymes (every track drops the F-bomb) was probably a combination of marketing brilliance and dumb luck that made for her best-sounding album. On this sophomore effort, she received solid reviews from mainstream press. Even the British magazine Q weighed in saying, “There’s more to her than simply showing off and swearing.” And boy does she love swearing. On the track “4-5-6” she rhymes the word “shit” with “shit” 15 times.

Admittedly a huge part of the appeal for me was that such raw content was coming from a female. (Note: Jay-Z contributed heavily as did many other male hip-hop notables on writing and production). I guess I ignorantly found novelty in the manifestation of a female feeling need to prove herself to the industry. Sure, women curse — and there were other femcees before her. In fact, it was an era of stiff competition with the likes of Missy Elliot, Jean Grae and Brown’s legendary rival and cohort Lil’ Kim. But it was Brown who titillated me with her confidence and cockiness, asking, “Do you know how many words I’ve flown past?” She was the undisputed queen of hardcore.

The song “My Life” explains this black girl’s ordeal, struggling with the price of fame while explicitly chronicling the falling out between her and former friend Lil’ Kim. Here we get the depth that Q must have been referencing with lines like “I ain’t asked to be born.” Whether she intended it or not, she reveals an existential vulnerability, one that queer youth could certainly relate to. Her descent turns darker, more chilling, and profoundly plain to see with the line, “Sometimes I wanna slit my wrists and end my life y’all.” It’s clear she had a lot more on her plate than her beef with Kim.

Foxy also calls out gender’s double standards when she raps, “If I was a dude, they’d all be amused. But I’m a woman, so I’m a bitch — simple as that,” pointing out how femininity can be a hindrance to achieving success in hip-hop. With clever wordplay she takes on the theme of inequality, sometimes through simple metaphor (“My bullets hurt same as yours”), other times with more lyrical prowess (“Talk slick, suck dick for money in ya hand, I’m like bitch …I got mo’ money than yo man!”)

This isn’t to say that Chyna Doll isn’t littered with the materialistic clichés common in mainstream hip-hop. But there’s a refreshing air of entitlement involved that is unapologetic. After all, it was released at a time when rap reigned supreme and MP3 downloading hadn’t yet collapsed the industry’s marketing model. There was plenty of money to be made. Brown tells us exactly what she wants written on the license plate of her Lexus as she rides in a decade later to light up another summer.