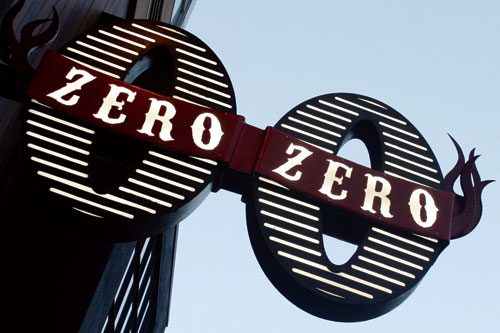 DINE Our recent bout of pizza chic was bound to reach some sort of apex sooner or later, like all fevers, and it now appears to have done so at Zero Zero, the Bruce Hill endeavor that opened last summer in the old Azie space adjoining LuLu. The name refers to a vaunted Neapolitan flour used to make pizza dough, but it also seems to suggest the turn of the millennium, with its near-5,000 Nasdaq and the reinvention of SoMa as the urban version of Silicon Valley. If you’d gone to sleep about 10 years ago and were just now waking up, you probably wouldn’t think much had changed, except that pizza had become very grand indeed during your little nap.

As a pizza master, Hill has a formidable pedigree. He was the longtime chef at Oritalia, one of the city’s most interesting and innovative restaurants of the 1980s and 1990s before moving on to reinvigorate the cooking at both the Waterfront and Bix. The Zero Zero gamble is to open a pizzentric restaurant in the heart of the city’s new restaurantland instead of at its fringes, in the lower Haight (Ragazza), Dogpatch (Piccino), or Glen Park (Gialina). A major plus of the location is that a rich lode of clientele is near at hand; being upstairs at Zero Zero on a busy weekend night is a little like trying to work your way through the break room of the Abercrombie and Fitch catalog. Clearly pizza is familiar and reassuring to people who aren’t too many years past their college graduations and who are now living in SoMa’s innumerable new luxury lofts. But is pizza enough to carry a serious restaurant?

Hill has gracefully hedged his bets by laying out a menu that’s considerably broader and more sophisticated than a few tomato-red pies to be washed down with steinfuls of brew. The kitchen turns out an assortment of crudo, antipasti, and pasta plates to keep things interesting. And if you don’t want pizza at all, you can certainly get by — although you won’t find so much as a single conventional large dish. It’s little dishes, with or without pizza. Or bupkes.

We found the food beautifully conceived and presented, although several dishes struck me as being on the verge of too salty. This is odd, considering that so much restaurant food has struck me as underseasoned over the years. Whenever I come upon oversalted food in a restaurant, I find myself thinking of the young chefs-in-waiting who can often be seen in clusters on the sidewalks in front of culinary academies, puffing away at their ciggies. It is well known that smoking cigarettes dulls the sense of taste and affects the way a chef is seasoning things.

A crudo of California halibut flaps ($12.95) was presented on a narrow sushi platter, as if subtly to enhance our sense of its freshness. And it was glisteningly tender, its butteriness deepened by Fiordolio EVOO. But the promised “panzanella” was just golden-crisp croutons with salt sprinkled over the top. It is surprising how much damage even a little salt can do to delicate food. I also found too salty an otherwise marvelous salad of wild arugula ($9.50) with quarters of ultra-ripe yellow nectarine and marcona almonds. The greens, with their almost prickly freshness, could have been picked five minutes before. But the lemon vinaigrette tended toward briny. One dish we did find in good tune was expertly braised octopus ($13.95), cubed and tender and plated with Sicilian chickpea fritters that could have passed for polenta triangles, along with the wondrous weed purslane and an agrodolce (sweet-sour) sauce. There was an important clue in this dish — that saltiness is a relative phenomenon. It can be balanced.

The pizzas buck the local trend by using a slightly thicker, puffier crust. One nice feature of puffs: they blister well. Blisters suggest that the pie has been rushed to you straight from the oven, like a popover. The topping combinations are elegant and restrained; even a relatively lavish pie, the Fillmore ($15.95), with leeks, mozzarella, hen-of-the-wood mushrooms, garlic, thyme, and three cheeses (parmesan, pecorino, fontina), remained coherent, with fresh herb breath.

But Zero Zero’s best feature is probably its build-your-own-dessert option. You choose your base ($4), your ice cream ($4.95) — simple flavors but housemade — and your toppings ($1 each). Olive oil and sea salt are among them, but so is chocolate hazelnut crunch. Which would you rather have?