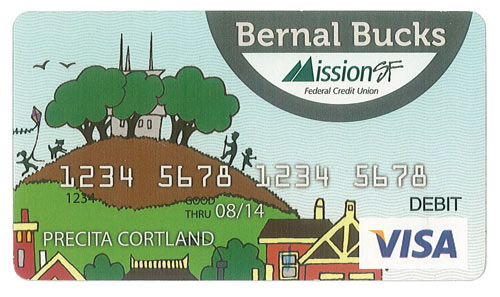 SHOPPING I stumbled into a small-town saloon, complete with a dingy 1950s cowboy mural over the door, a horseshoe-shaped bar, and the feeling that everybody — everybody! — knew the score better than I did.

Normally I do not spend my Tuesday night on this hill, but tonight was an exception. Cortland Avenue was hosting a local business walk — the sidewalks lined with bustling young families and the fundraising popcorn stands of neighborhood groups. Paulie’s Pickling was offering free tastes of its delicious jarred carrots and cauliflower.

I wasn’t even on the hill for the sour samples. The evening also was meant to debut the Bernal Bucks card — an innovative, or at the very least, new take on the idea of local currency.

Bernal Heights is a neighborhood full of folks who don’t have much call to go anywhere else. Harriet — the kindly woman whose hubby was playing fiddle in the bluegrass sextet perched cozily on the small stage to the side of the Lucky Horseshoe’s front door — told me that they had lived in the neighborhood since 1971. They were well-acquainted with Lisa Marie Delgadillo, owner of the Horseshoe. In fact, Delgadillo’s partner would be playing banjo during the next set with his band Shedhouse.

“I wasn’t expecting this many people to show up,” Delgadillo said. As luck would have it, that day was actually the soft opening of the tavern, which she had bought from an owner who had stocked the historic space with great blues music but “hadn’t given it a good clean in 20 years.”

“Bernal really has a tight-knit community of business owners and residents — it totally makes sense that they’d promote in this way. It’s totally Bernal,” she said, refilling my pint as Shedhouse launched into four-part gospel harmony.

Mind you, this was not the start of Bernal’s local currency program. Bernal Bucks have been in circulation since 2009, initially as stickers users could affix to $1 bills. By spending them, users got a little more for their money — a free Fuji apple at Good Life Grocery, a free used DVD from Four Star Video, $1 off your drink at Stray Bar. The money went to the Bernal Heights Neighborhood Center and other community groups. The nonprofits got funding, shoppers felt warm inside, and businesses passed along the stickered bills to the next consumer, encouraging more people to drop dough in the area.

But now there’s a debit card, which eliminates the sticker step and acts like a frequent-flyer miles credit card. The more you spend, the more Bernal Bucks you rack up. You print out the bucks in $10 increments on your computer and spend them in your favorite local enterprise — on a screwdriver on Wild Side West’s garden patio perhaps, or a quick knife sharpening at Bernal Cutlery. The whole shebang is accessible via computer: no fuss, no muss.

“How can we create a mechanism that gives us more control over our economic destiny?” asked Arno Hesse, co-creator of the program, in a phone interview. Hesse hopes the card will “create a reminder in the wallet and an incentive to do the right thing more often.” He cited a study done on a similar shopping mall program that yielded a 24 percent income growth for business owners as a result of increased buying trips and ticket sales.

Hesse expects that “hundreds, hopefully even thousands” of Bernal Heights residents and workers will sign up. “We are optimistic that it will be a mainstream phenomenon. You don’t have to have a degree in economics to jump on this program,” he said.

He estimates that the program’s participating companies receive 50 percent of the neighborhood’s cash flow to locally run businesses.

The card is available through Mission SF Federal Credit Union, whose sole location is just down the hill from Cortland Avenue. Local bank, local businesses, card design by local artist (Ashley Wolff, an accomplished children’s book author) — it’s all local except for one thing: the glaring Visa symbol in the card’s lower right-hand corner.

Hesse is aware of the irony of having a megacorporation’s logo on a card meant to prevent Bernal money from “leaking out to the Safeways, Home Depots, or Amazons of this world.” There was debate at the Bernal Business Alliance over the issue, he said. But in the end, it was all about convenience: Business owners were unsure if part-time employees would be able to grasp an alternative payment system and counter space was too valuable to set up another kind of card-processing apparatus.

“Choosing Visa makes sense because is widely accepted by most merchants,” said Kathleen Scheible, an eight-year resident of the area and owner of Bernal Homeopathy. She added that the program also features a Web interface for businesses that would like to skip the Visa step. “There was a fair amount of logistical challenge to using the Bernal Bucks: having to go somewhere to physically purchase them, knowing how to use them. We like the idea of cash over credit in Bernal, but for many of us, debit or credit is the reality for anything over $10.”

I handed Delgadillo my sticker-less cash and told her I’d be back for more bluegrass when the bar gets its cabaret license in August. Judging from the convivial tenor of her first night, I bet by that point she’ll have seen her share of the Bernal Bucks card.

Bernal Heights is truly doing its own thing — few neighborhoods in the city produce the same close-knit, down-home vibe. If the program succeeds, Hesse said his group might respond to requests to help implement it in other neighborhoods or even citywide. The responses I heard from neighbors that night indicated the program will continue to succeed. Still, it is somewhat discouraging that even this successful local business campaign comes by way of plastic fantastic.

To learn more about the Bernal Bucks program, let your fingers do the walking to www.bernalbucks.org.