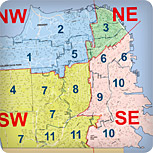 UPDATED BELOW In the midst of a political realignment at City Hall that is still shaking out, the Board of Supervisors Rules Committee is today (Thurs/23) considering appointments to the Redistricting Task Force, the body that will redraw supervisorial districts using the latest census data. And its choices will say a great deal about the role of integrity and impartiality in the new “politics of civility.”

This commission will arguably have more influence on the city’s political dynamics over the next decade than any other, so overtly partisan appointees should be viewed with great suspicion. Larry Bush at CitiReport did a nice rundown of the applicants and their backgrounds, but the Rules Committee will be where the real action is.

President David Chiu stacked the committee with a conservative majority (Sups. Mark Farrell and Sean Elsbernd) and named a chair (Sup. Jane Kim) whose political loyalties are tough to peg right now. Will she seek an appointee who doesn’t have a political agenda, or will she seek to reward a partisan ally like applicant Paul Hogarth, who worked on her campaign and writes for BeyondChron.org, a propaganda outlet for Kim-backers Randy Shaw and the Willie Brown/Rose Pak/David Ho cabal that elevated Ed Lee into Room 200 and is desperately trying to keep him there.

There are other problematic applicants as well, including Potrero View Publisher Steven Moss, who ran for supervisor in D10 last year and has shown a penchant for seeking payback against his perceived enemies (including the Guardian, which ran articles questioning his residency status). Applicant Ron Dudum has also shown a vindictive streak – following up his failed D2 supervisorial campaigns with an unsuccessful lawsuit challenging the ranked-choice voting system – that would make him a worrisome figure to have on this task force.

So far, three people have been named to the body by the Elections Commission: gadfly/policy wonk David Pilpel, Google attorney Melissa Tidwell, and Mark Schreiber, the managing general partner of Cooper White & Cooper. So already, this is tilting toward a business community bias that will probably get worse once Mayor Ed Lee makes his three appointments to the nine-member commission.

Given how the Rules Committee is stacked, its three recommendations are likely to raise questions that the full board will need to put to rest when it takes the matter up on Tuesday. Voters need to have faith that partisan agendas aren’t shaping the city’s most important political lines, and now is the moment to ensure they have that confidence.

UPDATE: The committee voted unanimously to recommend Eric McDonnell, the chief operating officer of United Way of the Bay Area; Jenny Lam, director of community initiatives for Chinese for Affirmative Action and a board member of Chinatown Community Children’s Center; and Mike Alonso, a “security professional” with Corporate Security Services who got his law degree from New College in 2007 but never worked as a lawyer.