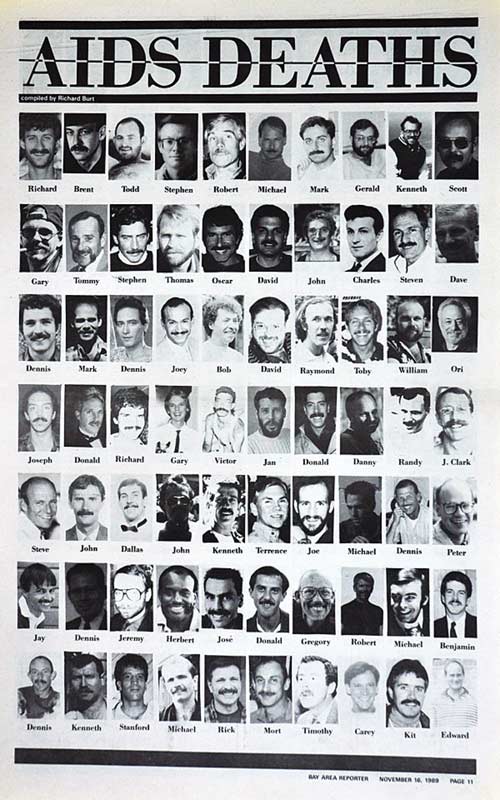 The giant commemorative AIDS ribbon that was up on Twin Peaks during the first half of June has been taken down, but the 30th anniversary of the epidemic, and how it changed San Francisco, is still reverberating throughout the city.

“It was like paradise,” Mark Ottman said as he guided me through the high-ceiling lobby, quiet as a library, of Union Bank on 400 California St. “For a few years. Then things got really scary.”

Ottman, the vice president of personal trust and estate services at the bank, recalled arriving in the city in 1981 as a 22-year-old Montana transplant. That year, the gay newspaper the Bay Area Reporter published the word AIDS for the very first time.

Although the paper has been at the forefront of reporting gay news for its 40 years — from White Night Riots of the 1970s through the Lavender Sweep of the 1990s, the Bowers vs. Hardwick decision through the “don’t ask, don’t tell” repeal — the way it straightforwardly handled the heartbreak of AIDS and the outrage that followed has become its lasting legacy.

“This was not stuff that was shown on the nightly news,” Ottman continued. “The B.A.R. was three or four months ahead in covering AIDS. In that sense, it was really the leader.”

This month, those with a thirst for history will need to look no further than newsprint. Union Bank’s LGBT Alliance has commissioned a retrospective exhibit highlighting the Bay Area Reporter’s coverage of the gay and lesbian community.

When the B.A.R. started in 1971, founders and friends Paul Bentley and Bob Ross had the intention of making it more than just a gossipy guide to bars and bathhouses. The newspaper focused on serious local news — even recruiting Harvey Milk as a political columnist.

“The founders weren’t journalists,” said Rick Gerharter, the longtime freelance photographer who curated the photo- and front page-filled exhibit at Union Bank. “But as the paper grew, it certainly became more professional.”

In 1981, when AIDS first appeared, the B.A.R. had no choice but to undergo a journalistic coming of age as it struggled to be first and be fair covering the mysterious disease that had begun to mow down gay men.

Yet the newspaper was not immune to the confusion and uneasiness that enveloped the community during the early days of the “gay cancer.”

“Me and my boyfriend both laughed — it must be another Anita Bryant plot against homosexuals,” said Robert Julian, recalling his first response to talk of the “gay-related immunodeficiency” or GRID.

“Gay people are united by sexual orientation, not genetics,” said Julian. Initially, the former B.A.R. entertainment editor and author of But the Show Went On: San Francisco 1987-1988 had his suspicions, thinking that a “physical ailment confined solely to gay people was a practical impossibility.”

It didn’t take long before the B.A.R. began reporting on the latest research, medical resources, and information about financial services available to the hundreds of gay men in San Francisco who had contracted the HIV virus.

Once researchers discovered that AIDS was being transmitted sexually, public opinion divided. Then-Mayor Diane Feinstein and Director of Public Health Mervyn Silverman wanted to close the bathhouses, but some members of the gay community considered this a violation of personal rights.

“There was this repression around gay people and sex, this hysteria around bathhouses,” said Gerharter. And the B.A.R. was hesitant to feed into that frenzy at first. “When it was clear what was really happening, how this thing was being spread around, then it clicked — and the paper really jumped to the forefront of covering what had tuned into an epidemic.”

The paper not only began to cover the AIDS crisis extensively, but did it with an editorial slant that fostered debate in the community. Paul Lorch, then-managing editor, became a prominent voice arguing to keep the bathhouses open. Bathhouses don’t give you AIDS; unprotected sex gives you AIDS, Lorch expressed in strongly-penned editorials. Sometimes he even answered back to Letters to the Editor.

“Lorch and the publishers didn’t believe closing the bathhouses would solve it,” said Wayne Friday, who took over the paper’s political column after Harvey Milk was assassinated and continued it for 27 years. “But no one had an alternative. Diane [Feinstein] would call me at 5 a.m. asking me what we should do about this thing.”

The community was split. Some, including Friday, believed that the bathhouses were a public health hazard while others accused Feinstein of scapegoating. “Those people were being selfish and foolish,” Friday said. “Closing the bathhouses saved lives.”

In 1984 the San Francisco Health Department asked for a court order forbidding renting out private rooms in bathhouses. Without the luxury of privacy, most closed within months. “San Francisco became a blueprint of how to handle AIDS on the city level for the rest of the country,” Friday said.

During this time, the B.A.R. was also keeping a more morbid type of tally: the obituaries. Each week the paper published two pages — 30 to 50 obituaries — until 1998.

“When you picked it up, it was the first thing you turned to,” Gerharter said. “It was just a name and a face. Maybe you recognized the person. Maybe someone you tricked with.”

In 1989, art director Richard Burt became so overwhelmed by the number of obituaries that had been turned in to the B.A.R. within the first 10 months that he wanted to convey the sinking feeling in the pages of the paper. The Nov. 16 issue included a four-page collage of everyone who had passed away due to AIDS that year. Just a name and a face.

“It was heartbreaking,” Julian said, “to see my friends and lovers pictured there.”

Through the efforts of Tom Burtch and the San Francisco GLBT Historical Society, a massive searchable online database of B.A.R. obituaries since 1979 was launched in 2009 (www.leifkerdesigns.com/olo/index.jsp).

During his tenure at the paper, Julian chose not to cover AIDS, feeling that the point of entertainment news was to distract away “from the soul-crushing presence of the grim reaper stalking our neighborhoods.”

Though AIDS was a heavily political newsbeat, Friday removed himself from covering it for different reasons. “I knew every elected official. I sat in on all the City Hall meetings about the bathhouses,” Friday said. “But I just couldn’t do it every week. It was too damned personal.”

“Thinking about turning the page to those obituaries even now is making me shiver,” Ottman said. “It’s like a high school reunion, except you don’t know which half made it.”

COVERING THE RISE OF ACTIVISM

The B.A.R. was also instrumental in covering the various political and protest actions that accompanied the disease, including the bloody police sweep of ACT-UP protesters the Castro and the Stop AIDS Now or Else blockade of the Golden Gate Bridge, both in 1989.

Gerharter remembers the blockade. “They arranged it for the morning commute. And thank God it was foggy or else the surveillance cameras would have stopped us.”

Gerharter would often be trusted with information about an upcoming demonstration and be the only photographer allowed to tag along. “You can document history better when you become a part of it. You get closer to the people — they’re not posing,” he said. “It was our job to be advocates and watchdogs.”

After consistently seeing the tragedy of AIDS on the front page for almost a decade, the B.A.R. became more active itself, inciting its readers to action. “We’d read the B.A.R. to find out about the rallies were happening so we could skip work and take a road trip to Sacramento,” Ottman said. “The Chronicle would never cover that.”

When the fight against AIDS became a war, the B.A.R.’s writers often felt like they had become war correspondents, complete with all the outsize personality conflict and drama of the classic stereotype.

“[Bob] Ross was a nightmare boss, a pain in the ass, and complete rageaholic,” Julian said of B.A.R.’s often conservative cofounder, who died in 2003. “But he was committed to keeping the paper and us running.”