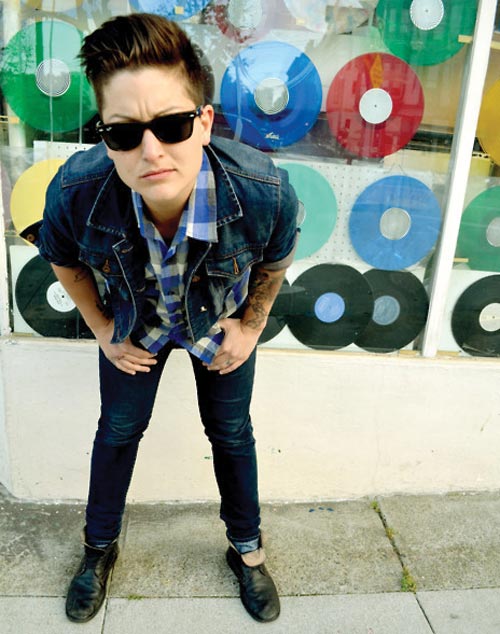 QUEER Apparently being a lesbian is the hottest new trend — so much so that middle-aged white dudes are posing as gay ladies, writing famous blogs and filling entire websites with lesbian content. (Yes, I’m talking to you, “Amina” and “Paula.”) Really?

Fortunately, there are plenty of actual queer women who can blog for themselves, thank you very much. Catherine “Cat” Perez, is one of those real-life queer women — verified by an in-person chat at the Wild Side West bar — posting real-life depictions of other actual lesbians on her blog Lesbians in San Francisco, a tribute to girls who like girls in America’s gay capital.

The layout is simple: each featured lez gets one photo and three fun facts of her choosing (“She won a s’mores eating contest as a Girl Scout.” “She doesn’t know how to whistle.” “She is related to Chuck Norris.”) Perez started LISF last summer with the intention of giving queer women of the Bay some flattering but honest representation.

“I just think in terms of the queer community, women can get bypassed and overlooked,” she told me, flicking her cigarette. “I want to educate people about what queer women look like, what they’re interested in, what they do. It may not always be what people assume.”

Perez began by photographing her friends, then opened it to anyone in the Bay Area, aiming for an accurate depiction of the city’s diversity. She swears there is no screening process. Although the aim is inclusion, the final product looks pretty tailored. Beauty may reside in the eye of the beholder — but it’s undeniable that these super-fashionable, adorably hipster girls are hot.

“Yes, there is definitely a ‘scene’ element to it. But that’s not the point,” Perez shakes her head and throws up her hands. “I’m only one person and I work a nine-to-five. People need to actively pursue a shoot with me.”

And it’s that simple — send Perez an e-mail, brainstorm your idea for the shoot, and show up. It’s an offer she often won’t refuse. So why are only a specific type of lezzies contacting LISF? Vanity? A need for self-promotion? Has LISF become a showcase of our local celesbians? Maybe it’s time for the rest of the community to get our faces up there, too.

“I wouldn’t consider myself a celesbian — I don’t know how I feel about that term,” Perez said with a laugh. “If I had to choose a label, I would identify as a queer woman,” embracing the broader, more inclusive mode of thinking. The title of the blog has discouraged some women from participating, but Perez says she has no plans to change it anytime soon.

“Growing up, I always wondered what queer communities looked like outside of my home in New Jersey,” she says. With its general-interest name, her blog comes up pretty high on Google searches. “I just want to shed some light on the people who live here. That’s it.”

Through the end of the month at the Lexington Club (www.lexingtonclub.com), Perez is exhibiting a collection of blog-inspired photos called “Stereo,” which simultaneously celebrates and debunks lesbian stereotypes. Perez selected 15 queer women and photographed them each twice: once in a stereotypical role (softball player, gym teacher, high femme) and once as themselves. As one might imagine, there’s a lot of overlap.

“Some girls were dressing up as other’s stereotypes,” she says. “Stereotypes don’t have to be negative. These photos embrace that, because, yeah, sometimes we are the stereotype.”