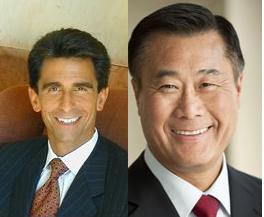 The Redistricting Commission maps will be finalized in the next few weeks, and the big news for San Francisco is the loss of a state Senate seat. (That, and the fact that the Assembly and Senate may both become more centrist, thanks to the new lines and the top-two primary system.) You can check out the maps here.

There’s not a lot anyone can do about the loss of the Senate seat; the population growth in California is in the Central Valley and the Southland. But there’s another story that San Franciscans need to pay attention to, and it’s all about numbers. Odd and even numbers.

Here’s how it works:

San Francisco now has two senators, Leland Yee and Mark Leno. Leno represents the East side and Marin, Yee the West side and parts of San Mateo. Leno’s district is Number 3; Yee’s is Number 8.

The commission hasn’t put numbers on all the new districts yet. But the way the law works, if the new Senate district has an even number, then Yee stays in office — reopresenting his current district — until 2014 (unless he gets elected mayor), Leno’s gone in 2012 and can’t run for the new seat until 2014. Which means for two years, half of San Francisco has no representation in the state Senate.

On the other hand, if the district gets an odd number, Leno runs again in 2012 for what will be his seat, Yee either gets electred mayor this fall (in which case there’s a special election for his seat) or he stays in office until 2014 (when he would be termed out anyway) and for the next three years, San Francisco still has two senators.

Remember that among Leno’s East side constituents are a disproportionate number of people of color, low-income people and LGBT people. That simple decision — on a seat number — could cut them out of representation.

For the record: This isn’t about Leno vs. Yee. If we had to choose one of the two of them for our state Senator, I suspect I’d go with Leno — but that’s not going to happen. It’s Yee AND Leno or Yee alone.

And it’s not about saving Leno’s seat, either. If he gets the bad number, he’ll find something else to do — Gov. Brown needs help, Nancy Pelosi’s going to retire soon, the filing deadline for the mayor’s office isn’t until August … if you like Leno, he’ll still be around. If you don’t like him, he’ll still be around.

It’s a question of the better deal for the city, and an odd number is clearly the better deal. The commission is having a hearing at Fort Mason June 27, 6 p.m. to 9 p.m., so it might be worth showing up and saying: Keep San Francisco odd!