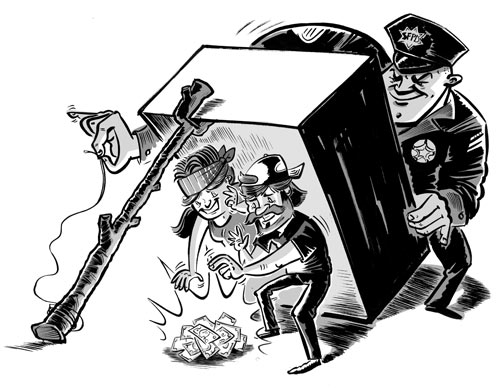 Unique Roberts squared back her shoulders and recalled what it was like when she first moved to San Francisco from East Oakland more than a decade ago. A tall, 33-year-old African American transgender woman with piercing eyes and a charming smile despite gaps of missing teeth, Roberts said she performed as a showgirl at clubs like Harvey’s and the Pendulum in the Castro. In those exciting days, “I fell in love with this boy, and he was an addict,” she explained. “I thought that if I did it, it would keep our relationship together.”

She recalled how awful her boyfriend felt when he found out she was using, telling her, “You don’t know what you’re doing to yourself.” He departed for Texas several years later, but addiction stuck with her as a way of life.

She says she’s tried to kick the habit, but it’s wrapped up in a battle against depression stemming from the loss of loved ones. Roberts was wearing one of the bright orange sweatshirts issued to inmates at San Francisco County Jail. She landed there after being arrested in April for allegedly selling a tiny rock of crack, weighing just 9/100s of a gram, to an undercover narcotics officer. According to the police report, the cop offered her $20 for it — but based on National Drug Intelligence Center street-value estimates, that amount is only worth about $2.50.

Roberts may go by the first name Unique, but her lawyer Tal Klement, who works for the San Francisco Public Defender’s Office, is fond of saying her case is hardly unique at all. She was one of several people arrested in the Tenderloin that day after interacting with the same plainclothes officer.

It was part of a coordinated sweep known as a buy-bust, a common practice under which an officer may pose as a homeless person, a clueless outsider, or a dope-sick fiend to lure people into selling crack, pills, meth, heroin, or marijuana. Once a transaction is made, a team of officers awaiting the signal immediately closes in and arrests the seller.

As of June 20, there were at least 109 open buy-bust cases in San Francisco. Based on defendants’ rap sheets, 92 percent had prior drug-use histories, according to a tally conducted by the Public Defender’s Office.

The officers posing as buyers — who often earn overtime — use street lingo, know which drugs can be obtained at which intersections, and sometimes offer higher prices than the accepted street value. Attorney Anne Irwin, also a public defender, is critical of the practice, saying it’s an expensive tactic that’s makes for easy arrests — because the money is irresistible to addicts who think they’re getting an opportunity to convert a personal stash into more drugs.

In a lean budget year, “they’re cutting social services left and right, and these are the very services that could help the addicts get off the street,” Irwin noted. She’s skeptical that the strategy stems the flow of substantial quantities of drugs.

Police Chief Greg Suhr, who said he participated in buy-busts for years as a narcotics officer, credits the tactic for helping to eradicate a rampant open-air drug market on Third Street in the Bayview, and says it can help prevent drug-related violence.

Klement, however, condemns it as a “war on crumbs,” saying it ensnares far more addicts than serious dealers and often ends up unnecessarily pinning felony convictions onto low-level offenders.

Buy-busts usually involve around eight officers, according to an average calculated by the Public Defender’s Office based on open cases, but have involved as many as 14 and as few as three. There’s the decoy buyer, who sometimes dresses in grimy sweatpants, goes without shaving, or dirties his face to look like a street addict in desperate need of a fix. There’s a “close cover” officer who follows the decoy, plus an arrest team that is also sometimes in plainclothes. Beforehand, officers will photocopy cash — usually $20 bills — to document the serial numbers so that the same marked city funds can be used as evidence once recovered from arrestees. Busts can happen within minutes of one another, and a single shift may net five or six arrests.

Irwin says the people snared aren’t typical drug dealers — certainly not big-time players. But they’re charged as dealers — and in many cases wind up branded as felons, with severe legal penalties such as multiyear prison sentences.

While the police department is able to show on paper that it’s brought hundreds of drug dealers into custody — and the district attorney can point to a boost in the conviction rate thanks to the program’s efficiency — Irwin says the amounts being peddled are tiny.

“In traditional narcotics operations, they cultivated snitches, used surveillance, and obtained search warrants” to go after major dealers, Irwin said. With buy-busts, “It’s like shooting fish in a barrel. Everyone agrees that we need cops on the streets to help keep us safe … But do we want to be paying hundreds of thousands of dollars for this?”

Sharon Woo, chief assistant of operations for the San Francisco District Attorney, told the Guardian that “we charge based on the conduct of the individual.” Woo went on to say that the DA tried to “exercise appropriate discretion” on a case-by-case basis when individuals are selling to support an addiction or due to being in dire financial straits.

Sometimes individuals are ushered into alternative programs such as drug court or a Back on Track program for first-time offenders, Woo said. And while the DA typically includes charges that make defendants ineligible for probation under state law if they have prior convictions for selling crack-cocaine — a discretionary practice that has drawn criticism from public defenders — Woo observed that “it doesn’t mean that’s how cases resolve.”

Police forces in nearly every major metropolitan area practice buy-busts, said Frank Zimring, a law professor at UC Berkeley’s Boalt Hall School of Law specializing in criminal justice issues. Yet he described the practice as costly and noted that paying overtime for it “makes what would ordinarily be a very expensive operation into a more expensive operation.”

Cost estimates for the entire program are tough to pin down. It costs $130 per day to house each prisoner in the county jail, amounting to more than $14,000 per day if all of the defendants with pending cases are in custody. If an average of eight officers per bust were paid $60 an hour each to spend six hours conducting a buy-bust, the current caseload represents more than $300,000 in officer pay — a conservative estimate — and that’s before lawyers in the offices of the public defender and district attorney are paid to prosecute and defend the suspects in court.

But no matter how you add it up, it’s a lot of money.

Suhr told the Guardian that apprehending street-level offenders occasionally leads officers to bigger fish. “Sometimes you get a low-level person, or a buyer if you will … if that same person would say, ‘But I know this guy and he has guns and he’s a big dealer and whatever.’ That is a good way to get to those bigger people.”

One of Irwin’s clients, a homeless man, was charged with selling narcotics after he scraped out the contents of his pipe to sell 1/1,000th of a gram of crack to an undercover officer for $20. In a rare twist, the case was ultimately settled on a misdemeanor possession of narcotics.

Inspector Robert Doss, who served as the decoy in that case, has earned substantial amounts of overtime while going undercover to buy drugs, according to a court transcript. In 2009 Doss earned $35,488 in combined overtime and “other pay,” which includes time spent testifying in court, according to a San Francisco Chronicle database of municipal salaries.

The Tenderloin is frequently targeted for buy-busts, with 65 percent of open cases as of June 13 having taken place in that neighborhood. The Haight ranked second, with nearly 12 percent of cases, and the Mission followed with 10 percent. Shortly after District Attorney George Gascón was sworn into his prior post as police chief in 2009, he announced a concerted effort to clean up the Tenderloin, and Klement maintains he’s seen a surge in cases stemming from buy-busts there ever since.

Drug dealing in the Tenderloin often makes the news as a source of frustration to merchants and residents. “You try and explain to the people of San Francisco that it’s okay for people to have open-air drug markets right in front of their stores,” Suhr said.

Yet Klement maintains that what is essentially a quality-of-life crime should not be treated as a felony. “There’s a lot of pressure from people who are invested in businesses [in the Tenderloin] who would love to see that neighborhood become the next Hayes Valley,” he said. “But what they don’t realize is that people are paying with prison for that agenda.”

Once someone has been labeled a drug dealer in the eyes of the law, he said, it becomes more difficult for them to access drug treatment — not to mention get a job, qualify for a student loan, or find housing.

Roberts’ case nearly went to trial. If convicted, she could have been sent to prison for a minimum of three and a maximum of 17 years due to extra penalties from prior convictions. On the eve of the trial, however, the case was settled on a possession charge for a year in jail, a rare outcome. Klement was hoping to have her placed in a treatment program.

Asked if she knew of others swept up in undercover operations, Roberts gave a wry chuckle and gestured to the jail corridor behind her, indicating that nearly everyone there had been taken down in similar fashion. Klement noted that the targets of the buy-busts are almost exclusively people of color, saying, “You walk into the holding cell and you think you’re in Alabama or Mississippi, not San Francisco.”

In an editorial on the subject that he wrote a couple years ago, Klement noted that by contrast, predominantly white middle class people with a fondness for illegal drugs are rarely targeted because they aren’t the ones selling drugs on the street. “The hard truth is that the police ignore most of the middle class drug use and dealing occurring out of private homes in every neighborhood or other public venues in the city — bars, nightclubs, concert halls. More drugs are being transported to Burning Man as we speak than will probably be seized during Gascón’s entire crackdown.”

For Klement, it’s just another symptom of a broken system. “A lot of these people are repeat players because we don’t have the right interventions at the right time,” he said. “We don’t understand addiction.”