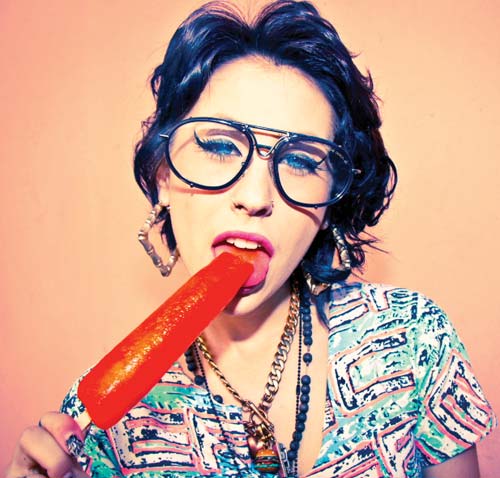 QUEER “I don’t like titles. I’m an open-minded person. I’m not going to shoot anybody down based on gender or color,” Kreayshawn told me over the phone. “I’ve dated girls. I’ve dated guys. And I’ve felt the same way for both.”

It’s only been about a month since the 21-year-old East Oakland native’s “Gucci Gucci” video blew-up, gaining both props and criticism for her label-bashing, be-yourself approach — designer-addicted “basic bitches” are her favorite target, and everyone from college-campus Adderall addicts to crass Barbie wannabes gets a dig. She’s generated a lot of hype and the immediate backlash has been harsh, but Kreayshawn’s rambunctious persona has kept things fresh. She’s an adorable little stoner with mad style, a naughty mouth, and a cartoonish sexual vibe. Her “White Girl Mob” is a swagged-out version of the Spice Girls and her collection of work (including a hilariously over-the-top, girl-on-girl makeout session in the video for “Online Fantasy”) immediately gave the press a reason to cry “lez.”

That’s usually the story when a woman steps up in the rap game, though — in a genre marked by macho preening and degrading insults, most women in hip-hop usually play the boys’ game and highlight their masculine side or market a hypersexed sluttiness, both of which can easily play into stereotypes of lesbianism. (Recently, rap — and pop — women have found one escape hatch: straight-up out-of-body weirdness, à la early Nicki Minaj.)

For actual gay or bi ladies who want a piece of big-time rap’s pie, the odds so far have been stacked against them — out lesbian rappers like super-talented Yo Majesty only seem to get so far, although there is, at least, a still-flickering homo-hop circuit that promotes queer talent. Major label artists are pressured to stay in the closet, despite all the rumors and paparazzi shots of “companions.” This last approach can be psychologically disastrous, as I found out one night in Minneapolis when a devastated and drunk Lady Sovereign, who had repeatedly rejected the lesbian label at her management’s request, crashed on my futon after her ex-girlfriend refused to let her stay over. Sov finally came out last summer. You could tell that her bottled-up feelings had taken their toll, however.

But hey, it’s 2011 and it’s nice to think the rap game has matured along with the rest of pop culture. Ellen is wifed up. Lohan dated Ronson. Lambert should’ve won American Idol. Everybody seems “Born This Way.” As celebrity homos become more visible, the “openly gay” tag seems old-fashioned. But that doesn’t mean we still aren’t curious — and if you don’t tell, people will keep asking.

Yet while Kreayshawn hasn’t denied being a lady-lover, questions regarding her sexuality have garnered a wash of fuzzy responses, only fueling curiosity and more sound-bites. My personal favorite was her quote in Complex Magazine, in which she stated she isn’t a “raging lesbian” but an “occasional lesbian.” Should I be insulted? This needed some clarification.

“I say occasional because I go with the flow,” Kreayshawn told me over the phone, while relaxing on what she considers a “chill day:” hours of interviews and business related to her recent $1 million deal with Columbia Records.

She could easily claim the “B” in LGBT, but says she’s not comfortable with that label either. If anything, she’d go for an “A.”

“Sometimes I tell my friends I’m asexual because I don’t feel like I seek out guys or girls.” Kreayshawn lets interested parties approach her and would just rather let things happen organically. “A girl and I could start talking and I could think, ‘Hey, she’s cool, we should be friends’ or I could think ‘This girl is hot, we should hang out on another kind of hype.’ And it’s the same with guys.”

She’s like the indie-rap version of Lady Gaga — another young woman in the public eye who isn’t afraid to declare her undeclared sexual status. This isn’t a phase and she’s not on the fence. Nor is she checking just one box. She could be the poster child for that nebulous term, “post-gay,” if we’re at a point in our culture where we can move beyond the importance of mainstream representation. (Many would say we’re not.)

She admits her lyrics are consistently more lez-oriented, but not necessarily raging. “It’s not like I say I’m gonna eat this girl’s koochie — it’s on a different hype.” This way, she says, guys can sing along too.

It’s appropriate that Kreayshawn keep one eye toward her male audience and supporters — she rolls with a lot of buzz-worthy industry dudes, most notably the guys of Odd Future. As nice as their beats may be, members like Tyler, the Creator have been known to deliver some nasty, homophobic lines. Does she just bite her tongue?

“I know those guys personally, but I’m also not someone who goes off and listens to their music every day. I don’t like homophobe stuff, not in music and not in my friends,” she says, maybe hinting that the Odd Future guys just like to ruffle rainbow feathers for effect. Kreayshawn herself is no stranger to playing dirty, although she often takes on a mocking male persona when doing so — calling other girls hos and Twittering lines like “I need a bitch on my lap.”

“Growing up in the hood and shit, I would hear all kinds of that shit walking down the street,” she explains. Now she wants to turn sexist speech on its head and play with it. “When guys say that stuff in music, like, uh girl, your pussy is so wet — what? Ew — nasty!” She wants girls to be able to sing along and participate instead of feeling attacked or uncomfortable.

“But I wouldn’t say you should read into every single lyric,” she says. With all the attention she’s receiving, she may yet turn her girl-love outward with some solid lyrics. She’s already hard at work on a mixtape and her first full-length, which she hopes will be released by the end of the year. Predicting where Kreayshawn will be by next summer isn’t so easy.

“I’ll probably be touring like something crazy. Maybe directing a music video. Or maybe I’ll be knitting socks. You never know with me. It could get completely out of control.”

And as for advice at this year’s Pride: “Everyone be safe. Have fun. And just make sure you have fun and be safe while doing it.”

I told her she sounded like a mom. “I know,” she giggles in her squeakiest voice. “I just care about my people.”