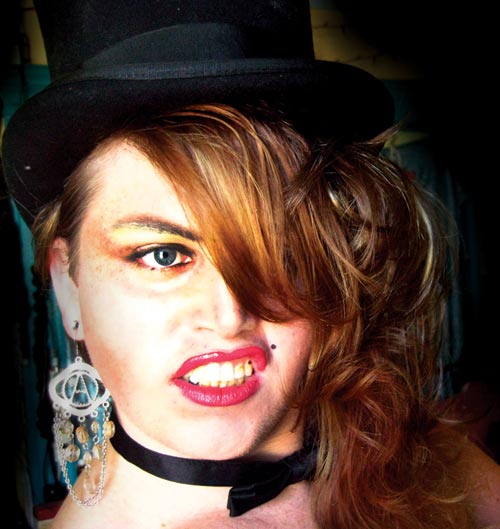 STAGE What do you want, and when do you want it? Those questions as formulated carry as much political connotation as sexual, and it’s not exactly a coincidence. Sex and politics are inextricably linked, as a glance at the news or Anthony Weiner’s bulging Twitter feed will show. The questions inevitably have a commercial ring to them as well, and not just because “sex sells.” The marketplace likes to pretend that consumers are all free agents. But given the countless ways it circumscribes, aggregates, activates, inactivates, or otherwise manipulates human lives via sexual desire, it’s more like “sex” sells “us” in, and into, the current social system.

So if you know the answer to the above questions you’re lucky. But do you also know why you want what you want? What is desire anyway? Is it basic and perennial, or is it a historically specific construction intimately involved in a system of power? Questions like these animate much contemporary art, though rarely more directly than in the wildly free and ambitious set of performance works making up This Is What I Want. Produced by choreographer Jesse Hewit, dancer Rachael Dichter (of Laura Arrington Dance), and Ernesto Sopprani of THEOFFCENTER, TIWIW baldly confronts sexual desire with a rigorous WTF?

The second annual TIWIW builds on a smaller, more spontaneous showcase thrown up at the Garage last year where, according to Hewit, “a lot of really beautiful — if quiet — things happened.” The success of that venture, including the discussion it generated, encouraged TIWIW founder Hewit to come back with another round and a stronger curatorial approach. This Is What I Want, which premieres as part of the 2011 National Queer Arts Festival, cultivates new work from many notable figures in the contemporary queer performance scene. The 13 artists represented in the four-day event include Mica Sigourney, Annie Danger, Harold Burns, Tessa Wills, Anna Martine Whitehead, and Monique Jenkinson. Hewit recently spoke to the Guardian about the thinking behind revisiting TIWIW and the unexpected results when people stage their desires.

SFBG What happened last year that made you want to mount a second festival in 2011?

Jesse Hewit In last year’s program, I realized that intimacy was being used as a motive, and often as a creative force, by the artists. I got so many e-mails from them individually, all this really intricate and powerful processing around the very simple prompt [of “This Is What I Want”]. For most of us, answering that question is fucking hard. It requires us to sit down with ourselves and get calm and honest in a way that isn’t too practical or hip. Some people said yes to the show because they knew exactly what they wanted, and what they wanted to do for the show. Many others said yes because they felt the subversive power of not knowing, and knew that forcing themselves to spend some time with the prompt and make something would be a productive and dicey ride. It was, and is, really, really interesting to be allowed to witness or have explained what intimacy means to [someone] and how sexual desire functions or does not function for them. Defining these two things and presenting that is theater enough for me.

I’ve always been interested in sex as language, as commerce-capital, as culture bearer. What I always come back to is that sex is undoubtedly still the clearest leveler of our differences, and yet at the same time the most jumbled and complicated container for them. I feel like what we want and how we get it — or don’t — says almost everything about how we experience power, our bodies, and our relationships to pleasure and to hope.

If we can say what we want, then we are honestly and critically locating ourselves within a fractured sociopolitical system of power and subjugation that needs all the attention that we can give it. We are putting out bodies first, and insisting that basic needs are still the most important ones. I specifically feel hope around programs like This Is What I Want, because it potentially combines live interpersonal experience with a straight-up act of social transgression. Maybe it’s a little easier to talk about what we want here in the Bay Area (though I have my suspicions about the authenticity of our sex-positivity around here), but rest assured, it is legitimately radical almost everywhere else.

SFBG How does the second annual compare to what you set out to do last year?

JH This time around I am working with Ernesto Sopprani of THEOFFCENTER as fellow producer, which means that we now have a component of organization, publicity, and community engagement that was not there before. We are also now kind of a full-blown festival, as we have two different shows that take place in two different venues. Both Joe Landini at the Garage and Lex Leifhiet at SOMArts have brought incredible energy to the project, and we couldn’t be happier to be housed by them. The process of building the lineup is very different this year because of how successful last year’s program was. Rather than invite people, we decided to ask folks to submit proposals and then we chose what we thought was the best fit.

Perhaps the most major change this year is the addition of a curatorial team. [Rachael Dichter] and I went into it from the start knowing that we would both choose what the show would be and that we would invite others to get in on it too. We asked Keith [Hennessy], Jiz [Lee], and Michelle [Tea] because they are all super-critical thinkers when it comes to the intersections of issues that this program deals with. Those curatorial meetings were actually some of the most interesting and charged conversations about what’s happening in local performance work that I’ve had all year.

SFBG What is happening in local performance work as you see it, and as it relates to the work in TIWIW?

JH I’m actually going to pull an almost direct quote from a blog entry I wrote for THEOFFCENTER’s salon [i.e., a virtual roundtable conversation mapping the queer performance scene underway at theoffcenter.org]. This moment in the Bay Area is significant because people are playing with telling the truth. Artists are complicating previously-assumed-to-be-radical notions of violence, definitions of damage and boundaries, assumptions and acts of appropriation, and feelings of peace. We are trying anything and everything. And while the character of our general approaches can feel trite or simple at times, the scores are executed with full frontal energy and, above all, persistent curiosity. No politic is safe. No form is sacred. It’s producing frictions and questions and images that have a nice and startling throb to them. It’s a good place to be working right now.

TIWIW is very much a product of that kind of thinking and making. Telling the truth, in any form or iteration, is an increasingly radical act. And telling the truth about what you want sexually holds a specific and very fragile weight because of how sex and sexuality can change the temperature in a room, in a community, in a country, among a people or peoples.

That said, organizing events where lots of people get together to witness creative manifestations of politically charged truth-telling seems like a fucking great idea. I think that a pretty sturdy legion of contemporary (and often queer-identified) artists will stand behind me when I say we’re here to crack your chest right open and fill you with our curiosities — because within them are the imaginings and strategies for a sweeter, braver, and more communicative system for us all. And we won’t stop until you get it.