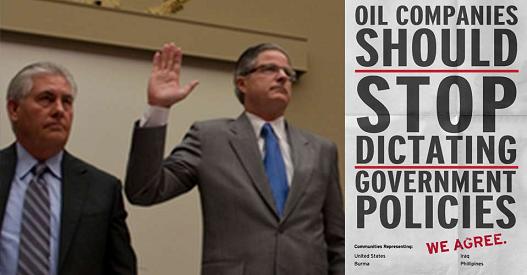 Police and security guards were out in full force in San Ramon yesterday, (Wed/25) where activists and shareholders of Chevron’s valuable stock converged at the company’s annual shareholders meeting at its headquarters.

Inside, the meeting, Chevron Board Chairman John Watson touted the oil corporation’s “community engagement” and market growth. Outside, around 140 activists from all over the world held signs to the speedy traffic on Bollinger Canyon Way, beseeching the general public to understand the costs of Chevron’s high profits. Some even made it inside.

“Our people have been dying,” said Tom Evans of the Sugpiat People of the Alutitiq Tribe in the native village of Nanwalek, Alaska, choking back tears during the 45-minute Q&A session with Watson.

“You are all a bunch of liars and thieves,” said Rev. Kenneth Davis, a Richmond resident who was arrested last year at Chevron’s shareholders meeting in Houston, Texas. He claimed he could see Chevron’s refinery from a window in his home. “People are dying, you steal from all over the world and process it in Richmond,” he said.

“When will Chevron embody in its operations environmental and social justice?” Elias Isaac of Open Society Initiative for Southern Africa asked the chairman.

After giving one of his canned responses of “we are a force for good everywhere we operate,” Watson conceded, “Perhaps it’s not enough, and we could always do more.”

Chevron just came out of a record-breaking year with $20 billion in profits, making it the largest corporation in California and the 11th in the world, with expectations of more growth in the years to come. It has nine new exploration projects it hopes to start in the next decade that will make Poland, Romania, Western Australia, China and other countries a part of the at-risk catalog of nations where Chevron chooses to do business.

It has claimed over 14 million acres of land for “exploration activities.” It’s also planning the world’s largest carbon sequestration project in Australia on a nature reserve and turtle habitat. If all this information isn’t scary enough, Chevron also makes huge messes and ducks out of cleaning them up.

Recently, the corporation appealed a guilty verdict from an Ecuadorian court for $8.6 billion in damages because of massive environmental degradation. The 18-year lawsuit stems from the destruction and mismanagement of the diseased Amazonian land that Chevron acquired when it bought Texaco in 2001. Ecuadorian Servio Curipoma lost his mother due to Chevron’s toxic sludge and was present at the meeting with other indigenous community members pleading with Watson and Chevron’s shareholders to change its policies in Ecuador.

“Take it up with your government,” Watson said to the speakers. “Petroecuador has not been a good partner,” he added, passing the blame onto Ecuador’s state-owned oil company. Chevron execs decided that was a good time to roll a video about the lawsuit and smeared the plaintiff’s lawyer, Steven Donziger, showing outtakes of the documentary “Crude,” emails and other private meetings, displaying Donziger to be haughty about the case. As the film rolled, most of the stockholders applauded Chevron’s PR efforts.

Seven items on the meeting’s agenda pertained to stockholders’ proposals on various subjects, including hiring a third party director with environmental expertise, creating a human rights committee, and disclosing the guidelines for Chevron’s country selection. None of the stockholders proposals passed, including one on the controversial process of “fracking,” which extracts natural gas from rock, that obtained 41 percent of the preliminary votes.

Once the meeting ended, the activists in attendance were met with a hero’s welcome out on the streets. Gitz Crazyboy of the First Nation Dene/Pikini in Alberta, Canada told the crowd he didn’t buy Chevron’s excuses that they were just following government mandates.

“If that were true we wouldn’t be here right now,” he said.

Antonia Juhasz of Global Exchange and the co-editor of the recently released The True Cost of Chevron: An Alternative Annual Report, said that although Chevron wasn’t as responsive as they hoped it was a victory nonetheless for the protesters.

“What was spit back at us was spin,” she said to the crowd. “We didn’t hear a truly substantive response to the damning human rights abuses that Chevron has caused.”