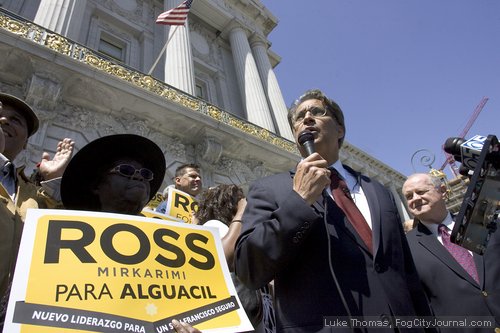 City Hall’s steps were awash in multi-lingual black and yellow “Ross Mirkarimi for Sherrif” signs at noon today, as Mirkarimi supporters watched Sheriff Mike Hennessey, who is stepping down after 31 years of service and eight elections, endorse Sup. Mirkarimi as the next sheriff.  “New Leadership for a Safe San Francisco” was printed on the English version of the signs that Mirkarimi’s supporters carried. They included former Mayor Art Agnos, Sups. David Campos and Eric Mar, Tim Paulson of the Labor Council, Debra Walker, Linda Richardson, Sharen Hewitt, Terry Anders, and Mirkarimi’s partner Eliana Lopez and their almost two-year old son Theo. And everyone had plenty of great things to say about outgoing sheriff Hennessey and sheriff candidate Mirkarimi. And Hennessey even pinned a shiny toy sheriff’s badge onto the T-shirt of Mirkarimi’s son Theo, making him the happiest kid in town. At least for the day.

Campos kicked off the event by honoring Hennessey as the “most progressive and most effective sheriff in the country.”
“Mike Hennessey is also my neighbor in District 9. I see him taking out the trash so I know he’s a good neighbor,” Campos joked, as he listed the many achievements in Hennessey’s long career as an elected official in San Francisco. These achievements included Hennessey’s pioneering innovations in criminal justice and culminated in his decision to blow the whistle in 2010 on the federal government’s plan to activate its controversial Secure Communities program in San Francisco—without telling the public.
“He’s not afraid to stand up for what’s right,” Campos said.

‘This is the time for me to move on,” Hennessey announced, as he laid out his reasons for endorsing Mirkarimi as Sheriff, over other candidates in the field.
Hennessey described the Sheriff’s Department as a “large enterprise” that has over 1,000 employees, a $150 million budget and whose jail houses an average population of 2,000 folks in custody, on a daily basis.
“It’s not something that can be handled lightly,” Hennessey said. “That’s why I’m here to endorse Ross Mirkarimi as the next sheriff.”

Hennessey listed the many endeavors that he and Mirkarimi have worked closely on, including a number of criminal justice issues, and he cited Mirkarimi’s extensive law enforcement background, his significant legislative accomplishments in the areas of criminal justice and public safety, and his ability to find innovative solutions and overcome obstacles to progress, as reasons to support Mirkarimi.

Hennessey observed that criminal justice is “one of the thornier issues” that members of the Board of Supervisors are often asked to get involved in, but often duck.”But Ross has not shied away from working on them,” Hennessey said, citing Mirkarimi’s involvement in shaping the “No Violence Alliance Project” and his leadership in creating the Safe Communities Re-entry Council.

Hennessey also noted that in face of AB 109, the Governor’s plan to transfer state inmates to county jails, “it’s vitally important to have person in charge of sheriff’s office that understands these alliances and can make them work more effectively.”

Hennessey concluded by observing that the Sherrif’s Department has to deal with a lot of bureaucracy, so it’s important to understand how the Board, the budget process and other city departments, including the District Attorney’s office and the police, work.
‘And that’s why I’m endorsing Ross as Sheriff,” Hennessey said

Then it was the turn of Mirkarimi, who graduated from the San Francisco Police Academy, did Naval Reserve training and worked for more than 8 years as an investigator for the District Attorney’s office, to speak.

“I have never been at a loss for words,” Mirkarimi acknowledged, as he launched into a speech that began by thanking everyone for showing up at short notice “for one of the most important occasions of my political career.”

Mirkarimi did a great job of giving Hennessey the praise he deserves.
“He is a living legend,” Mirkarimi said. “It’s completely impossible to fill his shoes.”
Citing Hennessey’s integrity and his ability to innovate, Mirkarimi warned that, “Maybe it’s come to the point where we have taken him for granted. He’s the longest serving elected official in the history of San Francisco, and he’s probably the most understated.”

“And the most important endorsement in this race is that of Mike Hennessey,” Mirkarimi added, as he gave Hennessey his commitment “to build upon your legacy as effectively as possible.”

Mirkarimi cited some of the most immediate and serious challenges that face the next sheriff. These include AB 109, which Gov. Jerry Brown just signed, which. Mirkarimi said, threatens to increase the reentry prisoner level by 30 percent in California. “It will take creative ingenuity and resources to make sure we are effective in taking care of this population,” he said.

Mirkarimi also touched on the rising number of veterans that are ending up in the prison system, talked more about the No Violence Alliance Project, and suggested that certified deputy sheriffs could help serve warrants, transfer prisoners, and patrol Muni, “when the police department finds itself understaffed” so as to ensure that San Francisco is safe.

“For every four people arrested and jailed in San Francisco, three out of four are repeat offenders in a three-year period,” Mirkarimi warned, by way of explaining why he wants to advance a more collaborative spirit between SPPD and the Sheriff’s department.

Mirkarimi also noted that one out of every 15 African American males are in jail, at any time in the year, compared to I out of 300 males who are not black or brown. “So, we must step up our game in dealing with poverty,” he said, as he recommended increased access to job training and good jobs, “so work doesn’t become a seasonal hope but a permanent job.” He also made the connections between a lack of good housing, childcare, and schools and a rise in poverty, crime and recidivism.

Mirkarimi concluded by crediting Hennessey for “walking that fine pirouette” between upholding the principles of public safety and understanding the power of redemption at the same time.

I asked Sheriff Mike Hennessey what he considers to be the biggest challenges of running for sheriff/
“Letting people know what you are going to do, and what your issues are,” Hennessey said, noting that San Francisco has an intelligent, issues-driven electorate.

And Mirkarimi’s supporters weren’t shy about letting folks know the issues that the current D5 Supervisor has helped them with, over the years.

“Ross, as a supervisor and me, as someone who comes from a community of color, we know the habits that ex-offenders can bring with them, if there are no safety nets,” said Terry Anders who sits with Mirkarimi on the Safe Communities Reentry Council. “And I believe in what Ross stands for and the integrity of his person. He’s one of the first people to show up when there are crimes and victims, and he attends basketball games and boxing matches.”

Paulette Brown, whose son Aubrey Abraska Jr, was murdered in August 2006, but whose killers have still not been brought to justice.
“We shouldn’t have to run and leave our families, we should be protected,” Brown said. “Ross is my district supervisor and if he can get in, and do something about crime and solve unsolved homicides, then I’m for him. Maybe if he gets in, he’ll have more pull to do something about these unresolved cases.”

And then it was back to work, which for Mirkarimi now includes the somewhat daunting task of trying to raise money in an election year that also includes a mayor’s race, but does not include the help of public financing, at least not for the sherrif’s race….