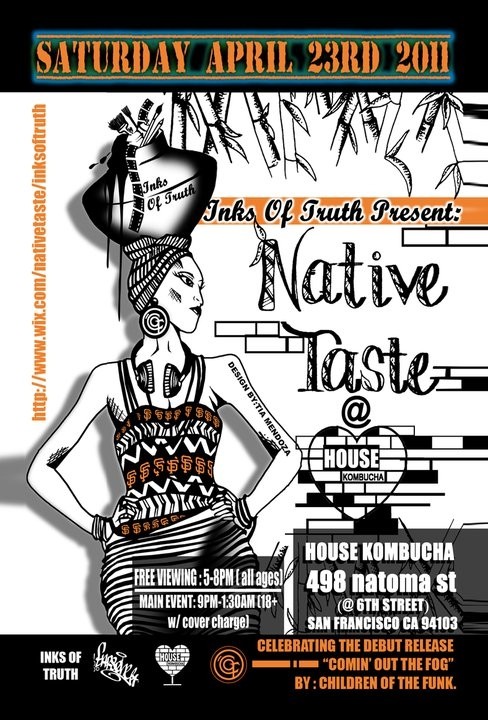 >>BLACK WHEELS Three reasons why African-Americans should ride bicycles, brought to you courtesy of community two-wheeler group Red Bike and Green. One, health: the exercise can counter obesity and chronic disease. Two, economics: why drop all your cash into a car pit when you can put it to brightening your present and future? Three, environment: environmental racism — including pollution in low-income communities — has gone on too long, and you can do you part to change it. Now that we have that out of the way, check out Red Bike and Green’s first “black Critical Mass” of the year in Oakland on Sat/23. Bikes: too many good reasons to ride them.

>>LOCAL BOY DONE GOOD Reynaldo Cayentano Jr. grew up on Sixth Street, and he’s not going anywhere. The City College student and photographer recently opened up gallery space with cohort Chris Beale in the old District Attorney’s office, but the two will be throwing their Sat/23 “Native Taste” party at the House Kombucha factory, where they’ll showcase the work of 13 local artists and the hip-hop stylings of Patience. Speaking of local boys, have you heard the new SF anthem by Equipto and Mike Marshall?

>>GOOD & PLENTY CHEAP There’s nothing we like better than good, cheap stuff. Not the cheap, cheap stuff of a Walmart or Kmart, or the good, pricey stuff of a Neiman Marcus or Bloomingdale’s. Good. Cheap. Stuff. And in pursuit of said stuff, we know that many of our fellow city dwellers have checked out a City Car Share car for the express purpose of driving to Serramonte Shopping Center in Daly City and hitting the Daiso store. Put away that gas tank: now we have our own Daiso store, newly opened in Japantown. Since most of the items cost $1.50, a $20 bill will get you a Santa Claus-size bagful of beautiful origami paper, clever lunch boxes, kitchenware, or whatever strikes your fancy from Daiso’s — no jive — selection of 70,000 good, cheap goods.

>>THEY WALK AMONG US It isn’t often that we indulge in a little unabashed fandom when a celebrity comes to our city/ashram. After all, we have our standards (smart, funny, left-leaning, maybe a pot bust or two), which rules out your Biebers, your Gagas, your Cruises ‘n’ Holmeses. We also believe that a man with a three-day stubble muttering to himself as he walks down the street has a right to his private musings. But when that man is Alec Baldwin, well, we have to stop, give him a deep Zen bow, tell him he’s welcome here, and report back. We have no idea why Baldwin is here – a Giants game? No, they’re on the road. SFIFF? No, we would have heard. Filming an episode of 30 Rock, Alcatraz Edition? Possibly –- and truthfully, we don’t care. We will take this no further. No tweets, no nothing. Because we want him to come back -– with Tina Fey.

>>THE GOOD BOOKS A few minutes spent reading a good, cheap book can add some insight and perspective to anyone’s day, and this weekend presents a reason to look for said books. The San Francisco Public Library’s 50th Anniversary Book Sale is going on at the Fort Mason Center Festival Pavilion until Sun/24, with everything on sale for three dollars or less. Books, DVDs, CDs, tapes, and other media are available, and on the sale’s final day, nothing will cost more than a dollar.