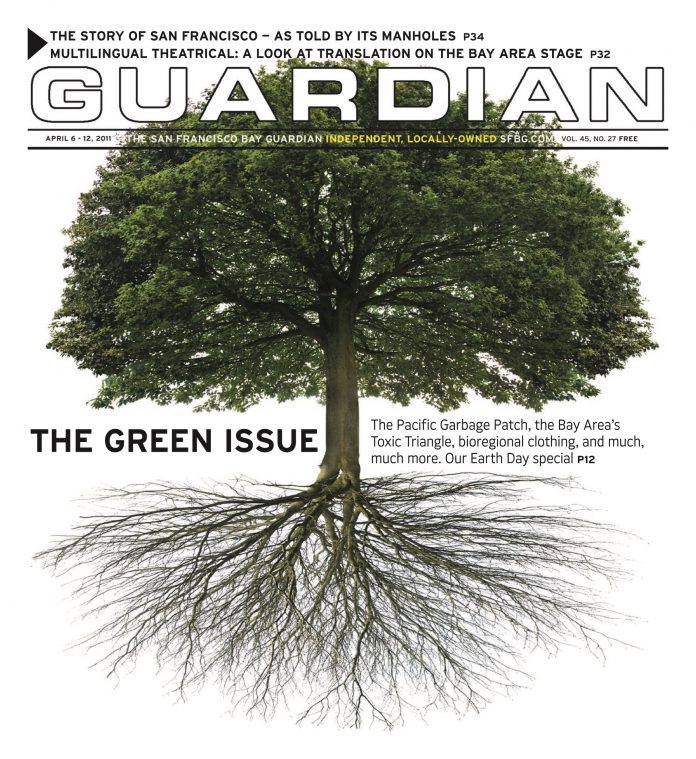 MUSIC This I know, having heard the name discussed in hushed yet excited tones among ecstatic ex-hardcore kids, having taken in all of two Lightning Bolt shows by Brians Chippendale and Gibson since Ride the Skies (Load, 2001). Having felt the gale-force winds of their live fury while swapping sweat with pinballing strangers. Having tasted the salad and found it delightful. Having waited with anticipation for their next show in the Bay Area—this time the night before they play Coachella.

Lightning Bolt’s most recent album, Earthly Delights (Load, 2009), is just as majestically noisy — and chock-full of wonder — as their seeming-career-best Hypermagic Mountain (Load, 2005). The time is right to share some truths about the dynamic duo.

“Mustard ran off, Weird appeared out of nowhere. Omni died,” says Chippendale of his Fort Thunder felines, driving the van and deep into the weeds of Peter Glantz and Nick Noe’s 2002s documentary, Lightning Bolt: The Power of Salad [and writ small like an afterthought] & Milkshakes. “Calico is too stupid to leave. Warlord ran off …” The talented cartoonist then goes on to recount the sad end of a pet rabbit, which broke its neck playing around metal. Seeing it bare its teeth, arch its back, and let lose a hair-(or hare-)raising “death scream,” Chippendale was forced to put it out of its misery with a sledgehammer. “Aw, I can’t believe I did that,” he says. “I love animals! Better than people, animals.”

Unless Lightning Bolt is playing, freakishly, on a stage, you must make the effort to get up close — or find a rafter or pole to dangle from.

I first saw ’em around ’03 when they played the Verdi Club, the old-folks rec hall near that sketchy patch of Bryant Street where working gals like to service their johns curbside. I wasn’t one of the lucky dozen or so standing right next to the twosome on the floor, so I wasn’t able to see much, even when I climbed up on a rickety metal folding chair to get a glimpse of sock-monkey-ish-masked Chippendale, looking like a mad drummer from the island of lost toys.

I fared better at Lobot Gallery in 2007, when I used all my best pit skills to wiggle up to the front for the first couple songs, risking a broken nose to get my fill of Lightning Bolt’s unforgettable way with Sabbath-style volume and Phillip Glass-style repetition, primal rambunctiousness and raw poetry. Certainly they’re the fiercest bass-and-drum duo ever to step into the formidable footwear of Ruins and godheadSilo, but has there ever been another hardcore or noise combo that has fully tapped the melodic and textural possibilities buried within a full-force blast beat?

BASSIST BRIAN GIBSON WORKS FOR VIDEO GAME COMPANY HARMONIX AS THE LEAD ARTIST ON GAMES SUCH AS ROCK BAND.

“I wish more of my projects were pure recreation,” the Rhode Island School of Design-schooled painter told Motherboard.tv. “I just get caught up in this sort of addiction to doing art and music stuff, but it would nice to be just fishing or exercising or drag racing.

So much of what I do is about me being deeply obsessed with projects and being alienated from communities and wanting to do something different.”

You also get the funny intro to “Caught Deep in the Zone,” in which a Euro-accented fellow warns, “Next time you go and buy a record and you think you’re all alternative and groovy — and everyone is into the alternative charts — remember it’s just like the other side, just a bit stranger.” Cue an onslaught of feedback-wracked, crunching skree: the death scream of Godzilla as lizard flesh is wrenched from bone.

ONE OF THE BEST LIGHTNING BOLT VIDEOS: PAPER RAD’S “13 MONSTERS.”

This ode to terrifyingly cute cartoon imagery, à la headless, bass-playing hot-pink tigers, opens with Gumby comforting a distraught Goo, who sobs, “There were 13 of them …”

With T.I.T.S. and High Castle