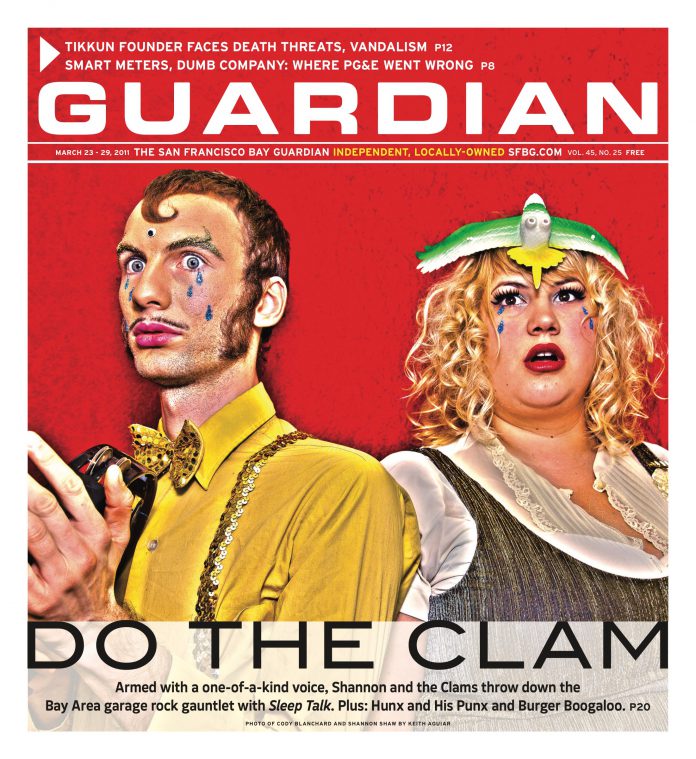 MUSIC For three nights, Burger Boogaloo is going to sate the appetites of Bay Area garage fiends with a hunger for rock. It makes perfect sense that the weekend event is building to a Sunday night finale involving Midnite Snaxx. Sharing the stage with Nobunny, as well as Shannon Shaw’s side project, Egg Tooth, the Snaxx bring a skilled chef’s resume to the bill: Tina Lucchesi, a hairstylist at Down at Lulu’s by day, has blasted amps in bands such as the Bobbyteens and Trashwomen, while Dulcinea Gonzalez, who does time at the Guardian while the sun is out, was a member of the Loudmouths. (Bassist Renee Leal of the LaTeenos completes the trio.) I recently caught up with guitarist-vocalist Gonzalez and drummer Lucchesi.

SFBG You two are garage rock veterans. How do you feel about the Bay Area garage scene right now?

SFBG One of your songs is “October Nights.” What’s special about that time of year?

DG October is when Budget Rock is happening. We tend to party hard, and the weather tends to be better. [The song’s] a celebration of rock ‘n’ roll and living in the Bay Area.

DG Tina wants us to have a record cover where we’re werewolves, like Ozzy Osbourne [on the cover of Bark at the Moon].

SFBG Are there any looks you have in mind for upcoming shows or photos?

DG Don’t give Tina any ideas, she loves to dress up. We had taco suits for Halloween. We hope to do a video soon where we can express our funnier side.

TL This is a T-shirt, tennis shoes, leather jacket kind of band, which is good. It’s cas.

SFBG Why do you think there’s such a connection between garage rock and food, especially in the Bay Area, with bands like yours and Personal and the Pizzas, and labels like Burger Records?

DG I guess it has to do with wanting satisfaction right away. We like our music a little dirty, sleazy, fun, and poppy, and those kinds of foods are the same way — a guilty pleasure.

TL Probably nachos — the vegetarian nachos from [Taqueria] Cancun, with cheese. The midnight buffet that drunkenly happens at my house dips into anything in the fridge.

DG Pizza from Lanesplitter’s. We’ve had some terrible, terrible Taco Bell runs after practice and going to the Avenue.

TL Sometimes we get healthy and go eat sushi at Koryo because they’re open until 3 a.m.

DG That’s when we just got paid.

DG We put out our first single on Raw Deluxe. Our next single is on Total Punk Records, an offshoot of Floridas Dying. It comes out in May. Then we have big plans to record our LP for Red Lounge Records in Germany, which will be out in the summer.

SFBG How did you wind up on a German label?

DG This guy [Martin Christoph of Red Lounge] follows a lot of the bands that Tina’s been in and he knew one of my past bands, and he liked the rawness of our recordings. We’re stoked. Hopefully this means we get to go to Europe.

DG Jason Testasecca from Nobunny is recording the album at Tina’s house.

SFBG Is there anything that people should expect from Midnite Snaxx at your Burger Fest show?

DG Tina, what are you gonna do?

TL They should expect a full-blast snack attack all over their faces.