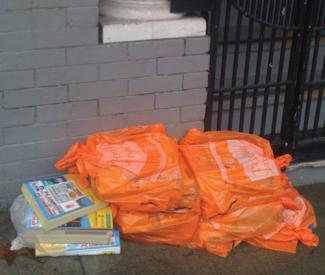 A smorgasbord of groups including the SF Chamber of Commerce, the International Brotherhood of Electrical Workers, and LGBT publishers announced their opposition to the proposed ordinance to stop distributing the print Yellow Pages to everyone who doesn’t specifically request not to receive them.

A press release by the Yellow Pages Association claims that the coalition is “concerned that the move would put hundreds of San Francisco residents out of work, limit small businesses’ marketing, and hurt the city’s fragile economic future.”

However, many of the small businesses the Guardian spoke with in its previous article on the subject repeatedly said the same thing— that the print edition no longer serves as a helpful advertising source.

It basically becomes a battle of opt-out v. opt-in. The YPA and the groups that announced their opposition choose the opt-out system because the Yellow Pages can go on printing and wasting as usual, without consumers doing much about it. The opt-in system eliminates the waste problem while allowing groups, perhaps the ones mentioned above the option to advertise and market in that medium.

The release also cited concerns such as limiting the distribution of directories to “target demographics” (i.e. minorities), the cost on the publishers for those who decide to have home deliveries, and the potential court battle over constitutionality, as the YPA may argue that the print edition is protected under the First Amendment.

One has to wonder how distributing costs will be more if the opt-in option is passed, with ultimately less phone books piling up on in apartment foyers and overflowing recycling bins. Phone books, it appears, that neither consumers, nor businesses, are using.

If the print Yellow Pages is as effective as the YPA wants the public to believe then having an opt-in system shouldn’t be a problem for it, as a lot of businesses and consumers will choose to opt-in and be happy with advertising and utilizing the phone book to those who actually get something out of it, and the opt-in system will also benefit those who are looking to never receive an unsolicited phone book again.