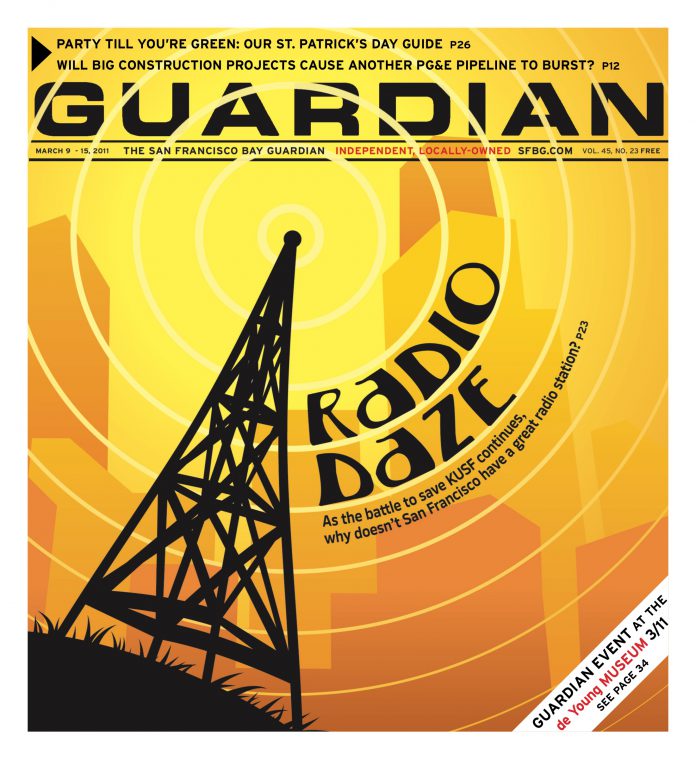 MUSIC/CULTURE Normally, Irwin Swirnoff’s demeanor is upbeat, and I’d consider him to be one of the friendliest people I know. But from the expression on his face, I thought someone had died. Even before walking into the room, I felt there was a weird vibe. “What’s wrong?” I asked.

“We just got sold and were taken off the air,” he replied.

Immediately and instinctively, without even really processing his words, I fired back, “Well, what are we gonna do about it?” Within minutes we worked ourselves into a frenzy, sending e-mails, texts, tweets, and phone calls to let everyone know that the nonprofit station where we volunteered, KUSF, had unfairly been ripped from us without any fair warning.

That morning, Jan. 18, was a blur of bad news. My parents were staying with me, and I had the day off. I needed a brief escape and turned to my volunteer work. It doesn’t really feel like work. I consider it more of a hobby, but calling it that would be selling it short. It’s like you can’t even have a hobby anymore without someone taking it away, selling it for $3.75 million and making it corporate. That’s exactly what the University of San Francisco did by attempting to sell out KUSF and the community in a veiled deal involving Entercom, America’s fifth-largest radio conglomerate; the University of Southern California; and Classical Public Radio Network (CPRN). We now know some of the details and overall shady manner in which these events transpired.

When I step back to think about our battle to save KUSF, one thing I find interesting is the current micro- and macro- momentum of power-to-the-people movements and how they can become contagious. It’s been said that tragedy brings communities together in astounding ways. Maybe the attempt to dismantle KUSF was the wake-up call some of us needed to pay attention to the behind-the-scenes politics of how, in radio, conglomerates are swallowing the little guys. This isn’t the first time this has happened — and it won’t be the last. But so many people were moved, inspired, and outraged enough to incite action, myself included. Maybe this is what we needed to get organized.

There was something really satisfying, in an old-school way, about a large group of people coming together to chant, clap, and scream “Shame!” in unison and really mean it. That’s how it went down Jan. 19 during the ill-conceived Q&A-style meeting staged by USF and its president, Father Stephen A. Privett. There was real energy in the air that night; it was sad, inspiring, and exciting all at once. It felt like I was going to a rumble, and I even dressed for the occasion, donning my leather biker jacket. When I got to the scene of the rally, I wasn’t disappointed by what I saw: sheer numbers, picket signs, “Save KUSF” hats and T-shirts, all materializing within hours. Most important, we had supporters willing to get vocal, with the passion to stand up and fight those who had wronged us.

At the end of February, the very community that USF and Privett sold out had raised more than $15,000, which is partly going to legal fees for what could be a precedent-setting denial of the station’s sale by the FCC. I think a lot of us were high on adrenaline in those first days after the station’s sale, especially because of the way it happened. Our cause has since garnered support from San Francisco’s Board of Supervisors. The majority of our supervisors seem to understand what the station meant to the community. You can’t just sell 33 years of independent radio, culture, and rock ‘n’ roll history. It never should have been for sale.