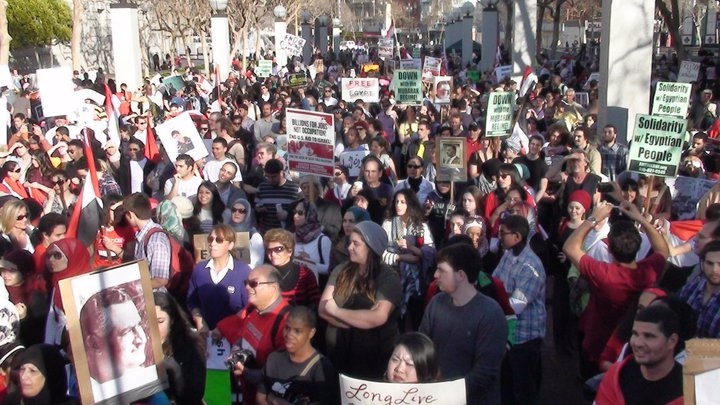 “Yesterday we were all Tunisian. Today we are all Egyptian. Tomorrow we will all be Free,” read one sign on at last weekend’s protest in solidarity with the wave of uprisings across the Arab world, an event drew thousands of people into the streets of San Francisco.

The crowd was diverse, from a variety of cultures and age groups. Sabreen Abdelnahmen is an 11-year-old Egyptian American who said she is “very proud there are people of many cultures and many religions fighting for the same thing.”

The events in the Middle East reverberate in San Francisco as well as many major cities, with everyone watching Egypt teeter toward democracy. To understand more about the events in Egypt, we spoke with local activist Yasmeen Daifallah, who helped organize the solidarity events and has connections in Egypt, where she attended Cairo University for six years. She is an activist, a political science doctoral student at UC Berkeley, and a singer in the Arabic music ensemble, ASWAT.

SFBG: Why protest in San Francisco?

YD: Two things were important to us. The first was to express solidarity… when [images of protests here] are transmitted to Tahrir Square [the central square where thousands of Egyptians have been remaining against government orders for two weeks]… it is definitely very uplifting. The second is to spread awareness in San Francisco…and in the U.S, to express a message to the American public and the American government. There should be respect for the people’s rights of self-determination and a cutting back on a strict consideration of self or national interest.

SFBG: Tell us about Tahrir Square, which has been at the heart of the protests, and who is leading the protests.

YD: I am amazed at the intensity of the steadfastness because many protestors are struggling to make a living. They all strike you as struggling to make a living and would not do anything to jeopardize making a living and these same people come out and say ‘we are staying here, we don’t care about bread, we care about dignity, we are not moving from here until [President Mubarak’s] regime falls.’

One of the most interesting things about this protest—there is no particular organization or person or even a group of organizations leading. Actually, the organizations are trying to piggy bag on the people and the momentum that is created by the public. For the leaderless nature that is has, it is remarkably organized.

SFBG: Why did the people rise up? Tell me a little about Egypt under Mubarak.

YD: The economic condition was abysmal and this is because when Mubarak came to power, the country started structural adjustment policies, which gave way to mass privatization. These have particularly intensified in the past 5-10 years. What this has translated into is massive unemployment and having to do several jobs in order to survive. On the day-to-day basis life under Mubarak is a life of economic hardship and social immobility.

When we start talking about the middle class, about politics and the political concerns probably [what is important] are fraudulent elections, rigging elections after people have actually voted but also preventing people from opposition movements from entering the ballot box to begin with. So this a very flagrant political repression. It takes place across the board. The second thing is the repression of the right to freedom of expression, whether in writing and the detention of journalists or in demonstrating. There is a law preventing the right to assemble. Then there is the bureaucracy and inefficiency, which all citizens suffer from on a daily basis. Their energies are exhausted in… getting their daily life going whether on the economic level, the bureaucratic level, or just the transportation level.

SFBG: You were just in Egypt and left 10 days before protests erupted. Do you wish you were there still? How does you feel as an Egyptian at this moment?

YD: Yes, very much so. I wish I were there—we all have a sense that there is something historic happening. We never had this number of people protesting against the regime and putting out demands that are this vocal and this radical. I wish I was more a part of this moment, I am just part of this moment from afar. I feel proud to be an Egyptian, which is a feeling you don’t get often, unfortunately.

On the one hand it feels bad because I wanted to be there to actually be a part of it. On the other hand, I have been convincing myself that there is a role that maybe I was destined to play being out here instead of out there.

SFBG: What do you think about the fears and concerns that democratic elections will lead to the rise of an Islamic government in Egypt?

YD: The question itself is unacceptable in the sense that fear and Islamic government put together should not be an issue. The issue is that people should have the right to determine who they want to govern them and whoever comes out of this is a legitimate leader.

The second thing is, you can easily see…this uprising is not an Islamic uprising—there is no foundation for this concern. The Islamic opposition, which has been among the most powerful if not the most powerful opposition movement will play a role and has to play, rightly, because they have been [part of the opposition]. There is no reason for concern, whether we look at it from the perspective that this is not an Islamic uprising or from the perspective that the nature of the Islamic opposition in Egypt is moderate in the sense that it is not militant and not violent and buys into a lot of democratic rhetoric and human rights rhetoric that is around.

SFBG: The other concerns have been around the lack of stability.

YD: This is not such a bad thing. The state of affairs in this point in time in the region is stability with no justice which in turn is bound to create instability and we have seen the instability of the intifada, we have the instabilities with the war on Gaza. Whatever we think of as stability in the Middle East is a fake and frail notion of stability. One would hope that if a new regime comes in Egypt that is more democratic that it would try to address some of the injustices that have been taking place so far regarding the Middle East peace process, but even this is not a guarantee.

SFBG: Where can people get the best information on what is happening in Egypt?

YD: Al Jazeera-English has been doing a good job at covering the events. It has definitely been the prime source of information to the extent that there is a huge campaign now demanding that Al Jazeera be available through satellite and cable providers in the United States. [For now,] you go online and click on live broadcast.

SFBG: Daifallah incorporates music into her politics through the Arabic musical ensemble ASWAT. Here’s a clip of their performance on Saturday: