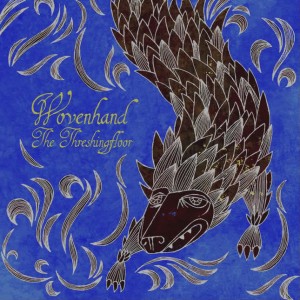 Whether it be the western plains or the Appalachian highlands, David Eugene Edwards of Wovenhand has long looked to the American landscape for inspiration, crafting songs which weave these diverse geographies together into a bold tapestry of richly textured sound. And yet, dating all the way back to the early days of 16 Horsepower, Edwards has never shied away from sifting a few foreign elements into his bold Americana. With The Threshingfloor (Sounds Familyre, 2010), he sets his gaze eastward, blending elements of Eastern European, Middle Eastern, and Romani gypsy music into his stark melodies and faith-layered lyrics.

From the driving oud of the title track, to the celestial Hungarian flute of “Terre Haute,” from the singing grass to the orchard gate, The Threshingfloor is the musical incarnation of the toil and bonebreak of a late-summer harvest: a passionate reverberation of hard physical labor and a harder metaphysical reward.

Conjuring sheaves of wheat from desert drone, and scorched earth from fertile finger-picking, Wovenhand continues to establish itself as the thinking fan’s indie band, constantly morphing musically yet never losing touch of its essential intention or intonation. As always there are a couple of songs that poke into the nether edges of its versatility: in this case “The Truth” plays like one of Edward’s early new wave-styled tracks from his Bloodflower days, and the straight-up cow-town rockabilly of “Denver City” serves up war whoops and vocal distortions. But the tracks that linger long after the CD ends definitely rank among the most rooted in devotion, particularly “A Holy Measure,” “Behind Your Breath,” and “Terre Haute.”