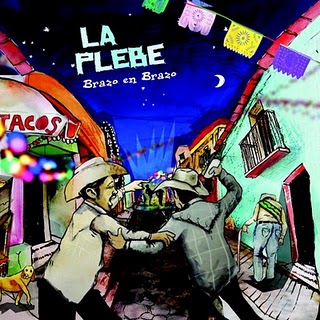 Don’t be fooled by the melancholy acoustic guitar that opens the new La Plebe album, Brazo en Brazo, for all of a few introductory notes. Just as soon as the ear is lulled into world-music lullaby-land, the horns and drums quickly pop up, until, like a day at the races, the full blaze of La Plebe’s instrumentation blasts through, and they’re off!

A band firmly established as being politically and passionately aligned with the dispossessed and disenfranchised, this new album expands beyond the barrio, to explore the state of plebe on a global scale. Songs such as “Venas Abiertas” (Open Veins) and “Guerra Sucia” (Dirty War) describe the states of oppression that keeps Latin America on unequal economic and political footing while “Opresión” speaks more generally to the human costs of war. If those don’t particularly sound like themes to rock out to, the happy accident of La Plebe is that rocking out is actually what they do best. No dweeby-hipster-peaceniks, these, their tight ska-punk rhythm, scorching horns, and rapid-fire guitar hooks, can make a libertarian’s toes tap as freely as any anarkid’s. It helps to think of their music as a kind of call to arms — it won’t go away, and can’t be ignored.

It helps too, that lines such as “corporations that control/at the multinational level/continue robbing and enslaving/those that are suffering most” (from “Venas Abiertas”) simply sound less didactic in the Spanish that all but two songs of ten are written in. One of the remaining two, “Been Drinkin,’” is a spare acoustic jam mourning a life drowned in liquor and honky-tonk. The other, “Bella Ciao”, is a punk rock rendition of an anti-fascist Italian ballad, a partisan’s final farewell to his “beautiful”. If any language could be more musical and poetic than Spanish, it is surely Italian, and La Plebe’s version is an invigorating, Romany-esque reel. I couldn’t help notice the recycled riff in “Campesino” which appears quite emphatically in Hasta la Muerte’s “Mi Tierra”, but at least it’s a good riff. Maybe it’s a sequel