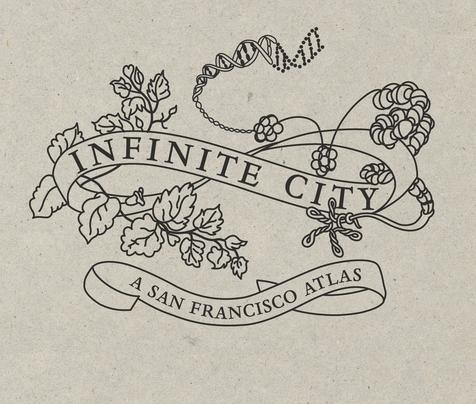 In the introduction to her thrilling new book, Rebecca Solnit provides the best explanation for why Infinite City: A San Francisco Atlas (University of California Press) can only be referred to as a San Francisco atlas, not the San Francisco atlas. “Every place is if not infinite then practically inexhaustible … any single map can depict only an arbitrary selection of the facts on its two-dimensional surface…”

What makes Solnit’s atlas appealing is the very arbitrary nature of the facts she chooses to have represented through a selection of 22 gorgeously rendered maps and a series of essays — many written and curated by guest collaborators with a particular interest in the storied intersection between geography and culture: poets, activists, archivists. From a map of “the names before the names,” an overview of the more than 100 indigenous tribes settled within the Bay Area circa 1769, to a map of the few remaining 6 a.m. bars which once catered to a large population of third-shift workers, to a map juxtaposing 2008’s tally of 99 murders within San Francisco proper with its flourishing population of Monterey cypress trees, the atlas reveals the truths simmering beneath the accepted fictions.

Or rather, a series of selective truths — for part of the joy of Infinite City is the infinite ways in which it can be read. The geo-politically inclined will want to take note of map #4: Right Wing of the Dove, which documents the locations of corporations such as Bechtel, military outposts such as Travis Air Force Base, and defense research laboratories such as Lawrence Livermore National Laboratory while maps for the Bay Area’s self-proclaimed foodie set include both map #7: Poison/Palate, and map #18: The World in a Cup, which details just a sampling of our many beloved coffee houses. Other maps include overviews of black history, butterfly habitats, queer spaces, Ellis act evictions… The subjects, like the possibilities, seem endless.

There’s even a map of San Francisco reimagined as a human head, accompanied by a tongue-in-cheek phrenological reading by novelist Paul La Farge.

It’s the map of Solnit’s internal San Francisco juxtaposed with that of performance artist Guillermo Gómez-Peña’s that comes closest to explaining the human compulsion to want to map out our known territories. In this particular map, both subjects define a series of unrelated places by defining who they are when they are there. From Rebecca: “In the Japanese Tea Garden I am always six years old; in the Sunset, I am almost Irish enough, but not San Franciscan enough; in the Excelsior, I am some chick from the Mission.” From Guillermo: “On the Golden Gate Bridge I still don’t feel suicidal; in Chinatown I am mistaken as a tourist from Spain or Argentina; In the Bollywood Café at 19th and Capp, I am the wrong kind of brown.”