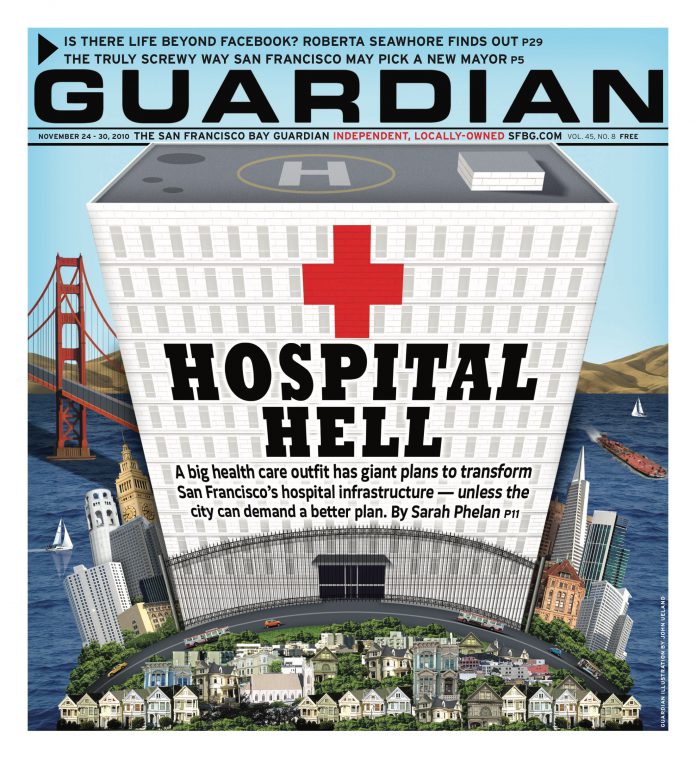 CULTURE There’s a party going on and I’m not there. But everyone else is, and I can see it from here — it’s that warm, golden light at the end of this tunnel. The door is half open, spilling a glittery radiance into the chill darkness, as if to say: Hey, baby. Why don’t you come back inside? No need to be lonely out there in the cold. My body tenses — will I move through the blackness? Will I meet the light?

Hell no. You can’t make a big fuss about quitting Facebook, then come back crying. Plus, I admit I lost it toward the end — in a self-destructive fit of Facebook rage, impulsively running my mouth and hammering out declarations on absolutely anything, even cheese.

After two years of playing nice with 500 mouth-breathers all stuck on one train, a prickly impatience began to emerge, resulting in the rise of emotionally ruinous fights about burritos, white people, rape, and mites. On Facebook I witnessed a level of savagery that can only be compared to how a grizzly bear kills a man: by tearing out his chest in one clean rip of the claw. You couldn’t even talk about deviled eggs without someone calling you ignorant. Like the Donner party, there was nothing left to feast on but ourselves.

I fought to stay alive amid the carnage by using Facebook as the means to disseminate inflammatory statements about castration, or to pick meaningless fights with bro-hams, particularly those who couldn’t spell — then I’d leave each and every one like a bullet-ridden coyote flung over a barbed wire fence. It was, without a doubt, one of the most spectacular times of my life.

My unquestioning, slave-like allegiance to this singular corporate platform started off so pleasant: it was a giddy and polite neverending tea party with sugary treats, Seinfeld-y gosh-it’s-Monday whimsy, and astute weather and slow-drip coffee observations. I got to reconnect with many wonderful people from my past, the majority of whom I guess I met in a blacked-out state. For the very first time, I learned the names of people I slept with, temped for, and still owed money to. I even made some brand-new best friends — none of whom I’ll ever hear from again. But the intensely codependent commenter relationships we nurtured were beautiful and perfect — beacons of dependability in this big, scary world.

And wasn’t it nice to see how the few losers I actually knew had totally cleaned up and sold out? Wasn’t it inspiring to read the self-affirmations of people who had lost their dreams? Or to know that, despite how very, very extremely busy everyone claimed to be — creating great works of art, penning riveting novels, and churning out dope beats — they could still find the time to fire off a million misspelled run-on sentences about their “process” between the hours of five and seven a.m.?

Finally, I was relieved of ever having to LOL face to face again. Facebook is a pinnacle of civilization that is fully accessible while taking a dump — and there isn’t a person on earth who doesn’t find that reassuring. Only bums, waiters, and asexual religious martyrs don’t mind being breathed on anymore.

Indeed, Facebook alleviates all pain associated with sustained eye contact, accidental brushes of the thigh, vomit splashes on the chin, moles, wrinkles, puffy eyes, and talking out loud. You can even end longstanding feuds without uttering a word by offering the passive-aggressive overture of the message-free add, or the quiet headfuck of the like. Clearly, Facebook is to friendship as Hitler is to spring.

Which brings me to the fakemance with Dope Dancer. It seemed so real at first — even an illiterate would have been blinded by the powerful vibes that scampered off the interface when we’d go at it — feverishly jousting and teasing one another in an unselfconscious flurry of authentic desire, which was the intimate prelude to … a follow-up like. It was our unique way of saying “I got you, babe” without actually having to.

I’d met Dope Dancer nearly 20 years ago in a moment of semiconscious raving. Then — as now, according to his bustling wall — he was an international superstar rave DJ (who now peddles cartoon collectibles on Haight Street sidewalks every weekday from noon till six — help a brother out, and don’t bring $20s), and we’re both pretty sure we held hands once, while on E in 1993 at the Endup.

Staring at his outdated profile pic on Facebook all day long was a seductive flashback to the glory years, when I could party for three days and still look cute. When all I had to worry about was finding the next party, the shortest dress. Real life had changed, but the fantasies had stayed the same.

And as with my commenter BFFs, transitioning to person-to-person contact was an awkward conundrum neither of us was equipped to handle. After six months of Facebook foreplay, we decided to interface live — specifically, under one roof, in the same room, on the same couch, at the same time.

However, face-to-face we had little to say. Oh, that’s not fair: we talked about Facebook. The sexual tension that climaxed onscreen fizzled into the needling desire to check my phone. There on his couch in plain daylight, we saw each other for what we were: two imperfect human beings. And that, of course, was a letdown. I actually didn’t mind the missing teeth and the curious forehead dent, details that never surfaced in his enormous collection of attractive profile pix. Even now, I am still too embarrassed to admit the truth: the pretend magic we shared could only flourish within the corporate safety zone of Facebook.

“Wake up, Roberta!” I told myself, “None of this is real. These tweekers aren’t your friends.” Facebook is simply a place to collectively drown in a wash of nostalgia and endless jibber jabber — solving nothing and doing even less. It is a stadium full of cracked-out narcissists, each with a podium and a mic, none of whom have anything interesting to say anymore but me. Of course, nearly every post I crafted was a jewel, a living and breathing Mona Lisa, even toward the end when I couldn’t stop because of the OCD.

Which begs the question: Was I sharing thoughts with a supportive, ever-expanding community, or squandering precious seminal fluid among strangers from the past?

After whipping out a particularly snappy status update one recent morning (“If eyes really could burn holes, how many assholes would I have by now?”), I thought, “Shouldn’t I be transcribing this shit into some kind of book — maybe one made with raw silk and pressed papyrus — instead of creating free content all day long for some rich asshole’s website?”

For certain, there would be no Mona Lisa if da Vinci had been a total Fakecracker. In Leonardo da Vinci and a Memory of His Childhood, the clearly bi-curious Sigmund Freud argues that the artist was able to achieve supreme genius status through the sublimation of his sexual urges, which he redirected into an obsession for making art. In other words, if da Vinci had been banging court jesters all day, there’d be no creamy side sauce for that The Last Supper. And let’s be honest — Facebook is nothing if not a substitute for the sex, cigarettes, and crack. Therefore, if da Vinci would not fuck, Seawhore would not post.

So like the stately albatross who knows in an instant she must fly east, or the lone soldier instinctively shifting course, I knew deep in my body the time to go was now (or maybe after posting two weeks of heartbreaking farewells).

Of course, the unexpected threat of dismemberment also helped speed my departure.

“Oh, maybe I should wait until the morning to bring up misogyny — after they’ve slept on all my points. That way they’ll never know what hit ’em. Or — “

“Sit down, Roberta!” shouted Haghole. “You touch that computer and I’ll hack your arms off. It is the only way to keep you away.”

“Well, hmph!” was the best I could manage because, goddammit, Haghole was right: Nothing would stop me from battling for the last word — over and over again — except the complete removal of my arms. And that just seemed kind of sad.

And I thought, “Who the fuck are these people, anyway?” Whoever they were, they bore no significance whatsoever to my everyday life, and yet, here I was having a full-blown panic attack. I was mortified.

The eve I revealed plans for immediate departure, I received a litany of pathetic pleadings and hysterical OMG/WTFs. They all cried, “Don’t do it, Roberta!” “That’s too drastic,” and “How could you leave?” — as if this was a real place.

And I thought, “Really, guys? I mean, it’s just Facebook. We haven’t maxed out on human invention yet, have we?”

Later that evening, after one last romp across the clean blue-and-white screen, I permanently deleted my account. To be specific, I started the deletion process — there’s a 14-day grace period, during which you can always change your mind, baby.

But after a few days of silence — aside from a haphazard speakerphone conversation with Haghole, who wondered if I’d moved out of town — I realized that I’d completely fallen off the face of the earth. Clean disappeared. I didn’t know shit about anything — like who was DJing at the Nordstrom Rack happy hour, who hated Tuesdays in addition to Mondays, and who was still verklempt about that nasty oil-spill fish massacre. And no one bothered to call, e-mail or text — none of them. I had returned to the pre-Facebook level of socializing — which meant only hearing from the same crusty old scabs you can’t ever get rid of. Come to think of it, those people were eerily absent, too.

I began to notice that, although life still had some meaning, it lacked all poignancy. For what good is seeing a hummingbird fluttering in the bright yellow sun if you can’t instantly manhandle the moment into a corny update? And who cares if you’re depressed, lost, or oversexed if you can’t insinuate it on Facebook and then reap the empty reward of “Oh, I feel you” feedback from 500 million strangers?

World tragedy took on a lackluster appeal. I found I did not give a rat’s ass about female genital mutilation or baby seal slaughter if I could not share my wise impressions with 500 other users. Which made me think I’d been a faker all along. And what about all those perfect status updates that no longer have a home? Where do they go to die? In this silky hand-sewn notebook? Oh, please. I can’t be bothered with that.

But in truth, the most annoying thing about leaving Facebook hasn’t been the absence of hilarious “What Famous Lazy Slag Am I” quiz results or even the social alienation. It’s the realization that everyone I know, or sort of know, is a sheep. Facebook is for them, as is it for one in every 12 human beings, the umbilical cord of all communication, and to sever it is to die. No one has the balls to take the risk. Yes, it’s cold out here all alone. But don’t mind me — I still have four more days of pre-deletion limbo. I can still come back, and I know everything will be exactly as I left it, smartly formatted in blue.