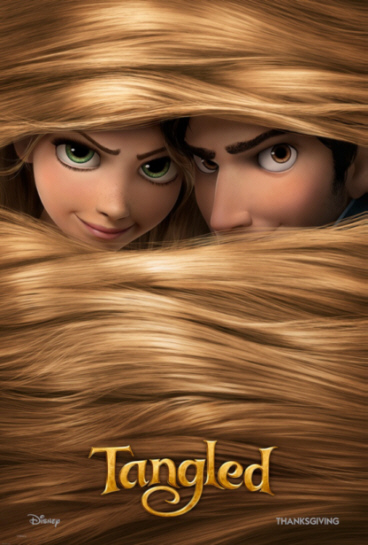 Walt Disney was right all along: dreams do come true. That is, if you’re Zachary Levi and Mandy Moore, and your dream is to be in an animated Disney movie. Levi and Moore star as Flynn and Rapunzel in Tangled, a fresh adaptation of the fairy tale about the princess with way too much hair. While Levi admits an affinity for Aladdin, Moore was always an Ariel fan.

“For our generation, I feel like that’s what every girl wanted to be,” Moore says. “What little girl doesn’t dream of being a Disney princess?” Both actors were also thrilled to be working with noted (and Academy Award-winning) Disney composer Alan Menken. Levi expressed a lifelong devotion to 1992’s Newsies, though he’s a fan of Menken’s other work as well.

“[Working with Alan Menken] is bucket list,” Levi says. “It’s crazy, crazy bucket list. We both grew up knowing and singing all the songs to Little Mermaid, Beauty and the Beast, Aladdin.”

Moore continues, “I just found out he did Little Shop of Horrors last night, and I about lost it.”

According to the actors, one of the strangest aspects of the voiceover experience was not working directly with co-stars. While Levi and Moore did collaborate on their duet, most of their acting was done separately and pieced together after they were finished.

“We never worked with each other at all on the movie, except for the duet,” Moore notes. “That is a total testament to the directors for cobbling these performances and creating the chemistry.” In some ways, that made things easier — especially for Moore, who admits to being shy.

“There was a whole session when it was like, ‘And now you’re running from the water that’s chasing you, and now you have to jump and leap and cry and eek,’” she recalls. “I was definitely sort of like, ‘Phew, I’m glad no one’s here to see me make a fool of myself.’”

Because Levi and Moore were somewhat removed from the filmmaking process, neither was sure what Tangled would look like as a finished product. Once they did get to see it in its entirety, they were pleased by how it all came together.

“I’m a dude,” Levi says. “I really liked all the action and the comedy. I loved [the supporting characters] Maximus and Pascal — they steal the movie.”

Moore enjoys the unique perspective voiceover work affords. “It was a treat to kind of feel like a real audience member and get to participate in watching the film unfold,” she explains.

These actors are genuinely excited about their work—and who can blame them as Disney fans? They’re also two people with vivid, Mouseketeer-approved imaginations, as evidenced when they were asked where Rapunzel and Flynn would be now.

“I feel like perhaps she would be doing something involved in the beauty world, since she has so much experience with hair,” Moore suggests. “Princess is sort of the ultimate job, but perhaps that’s just something she does on the side as a hobby.”

For reformed thief Flynn, Levi has something different in mind. “I think Flynn would be in security,” he says. “He would be helping companies learn how to safeguard their goods. He’d be that guy who goes and intentionally breaks into a place and says, ‘This is what your problems are.’”