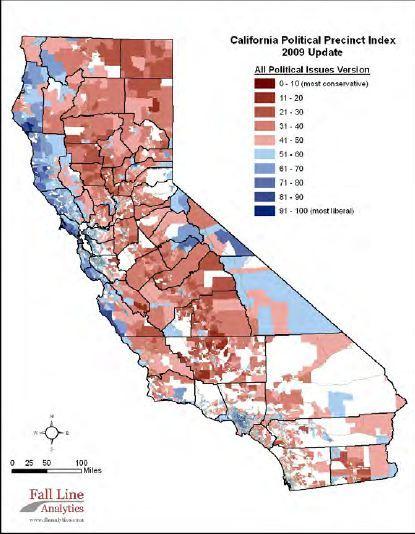 Probably not. The voters confirmed that the job of drawing new district lines next spring will be done by an independent (and unaccountable) commission whose makeup will not reflect California’s. (Five Republicans and five Democrats in a state where Democrats far outnumber Republicans?) But Brian at Calitics makes the case that it won’t matter much — and he’s hit on a really important point about California politics.

The voters have already gerrymandered themselves, in a sense. The liberals tend to live with liberals, the conservatives with conservatives. And any reasonably compact, fair district lines will reflect that.

In fact, the Fall Line Analytics map that Calitics cites makes an excellent case for splitting California into two or three states — one along the coast from Sonoma to Los Angeles, one in the Central Valley (including San Diego) and perhaps a third including the far-northern counties, which have wanted to secede for a while anyway. Then the coastal residents could have a progressive state with taxes on the wealthy to fund services, and the conservatives can try to survive in a low-tax heaven of their own. (And if you really think wealthy people will leave San Francisco and Silicon Valley and L.A. to move to Fresno for lower taxes, you’re as crazy as some of our blog trolls.)

The interesting twist on this all, though, is that there’s pretty good evidence that the population in California has shifted somewhat away from the coasts in the last decade and moved somewhat inland. Which means that Los Angeles and the Bay Area may wind up losing Congressional and state Legislative seats to the traditionally more conservative areas.

The data also suggests, though, that a lot of the new residents of the inland areas are Latino — and the way that Latino vote breaks may play a far more significant role than the redistricting commission.