Home Election 2010: Wiener confident in D8, but Mandelman not giving up 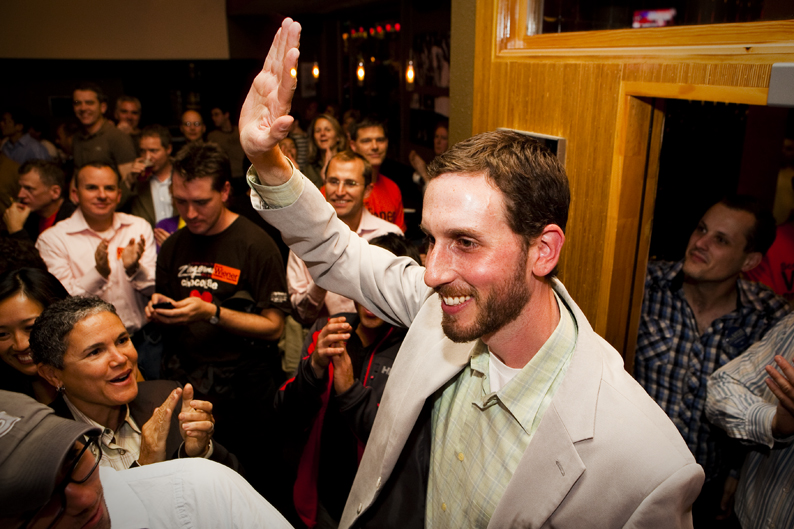 The mood was buoyant in Harvey’s bar in the Castro, where D8 supervisorial candidate Scott Wiener had 54 percent of the vote in early returns when he arrived around 9:30 pm. His lead over progressive candidate Rafael Mandelman has narrowed since then (45-33 percent at last count), and that campaign was still hopeful at its party at Pilsner Inn on Church Street.
“The question is does it get tight enough that the number two votes make a difference,” Mandelman told the Guardian, referring to the ranked choice election and showing hope that many of Rebecca Prozan’s second choice votes would go to him. Mandelman noted that his campaign had a solid volunteer effort and good turnout in the district. “We think it’s going to be closer than in looks right now.”
But Wiener expressed confidence that he will prevail. “I feel really good about it,” he told the Guardian. The race was fairly cordial among the candidates, but Wiener got hit pretty hard by mailers from labor and tenant groups attacking him as hostile to progressive priorities.
“It got negative toward the end, and I think that’s unfortunate, but that’s modern politics and the truth prevailed,” said Wiener, who has argued that his record of votes on tenant issue while serving on the DCCC was better that it was represented in this election. In fact, even some progressives think Wiener might be a better vote on tenant issues than incumbent Bevan Dufty, who was consistently a swing vote against tenant protection legislation.
In fact, Wiener campaign manager Adam Taylor, who is a renter, told us that he wouldn’t have worked on the campaign if he didn’t believe Wiener would stand up for renters’ rights. “We expected certain falsehoods to count out and they did,” said Taylor, who was running his first campaign in San Francisco. “I’m proud of how we kept our head held high.”