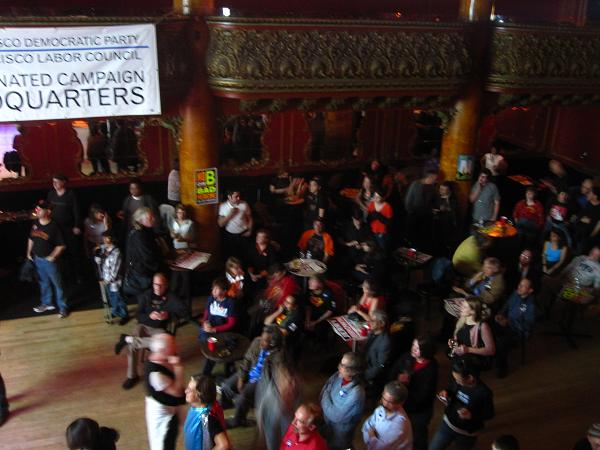 Labor Council executive director Tim Paulson isn’t quite ready to give up the ghost on this one, despite a reported 196 Republican seats already won in the House.  “We really don’t know what the final answers are… some things are going well, some things are going not as well.” Most of labor’s most pressing local races – Paulson cited Measure B and the District 6 and District 8 races as examples – have yet to be decided and may possibly not have a confirmed winner until tomorrow. Measure B is going down at the moment, by the way – 51.6 percent “no” votes, still not enough reported at this point to call the race.

So for now, the Labor Council-Democrat Party party at the Great American Music Hall is contenting itself with crudites and tunes by young rock-women, The She’s. Fiona Ma made it up to congratulate everyone who got out the vote for the Dems – Jerry Brown, Pelosi, and Boxer have cinched their races — but Aaron Peskin of the DCCC hasn’t yet made an appearance. Maybe it’s just the dedication showing. “Aaron doesn’t know the polls closed awhile ago,” Paulson announces.