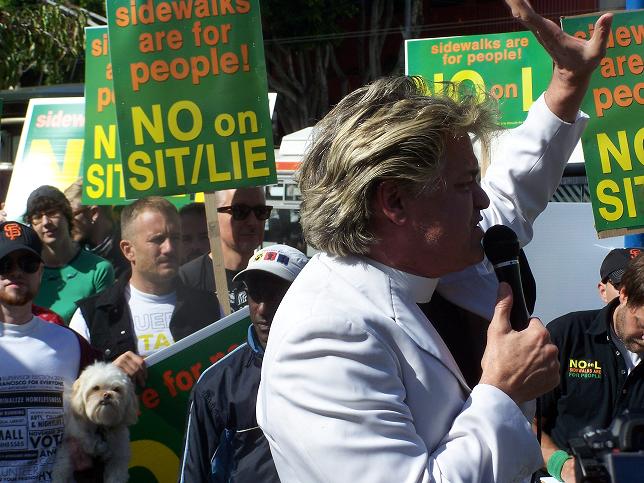 This afternoon in the Mission District, a crowd gathered to bear witness to an exorcism. Reverend Billy had come from New York City to banish the demon from SF. That demon was Prop L, an unholy measure to ban people from communing on San Francisco’s sidewalks.
“The only fundamentalism is the absence of fundamentalism!” bellowed the Rev. Bill, a former San Francisco performance artist turned pastor of NYC’s Church of Life After Shopping (which was in town to perform tonight (Mon/26) at the Victoria Theater for its Earth-a-llujah, Earth-a-llujah Revival Tour).

Rev. Billy cited constitutional dicta on behalf of civil rights: that we are all, even those without addresses, equal. The good reverend followed with a defense of the unadulterated and often unpredictable daily experience out there on the streets of San Francisco, apt to shape a human in good and thoughtful ways, that would find itself stifled if city regulations seep onto our sidewalks.

Sup. John Avalos spoke after Rev. Billy, and no sooner had he taken the mic than he accused Police Chief George Gascon of suffering a demon of his own: “hubris.” Avalos referred disapprovingly to Gascon’s previous attempts to tackle drugs and Critical Mass, the city’s monthly bicyclist phenomenon.

In reference to Prop L, Avalos shared that when he came to San Francisco, he knew “three people, had $1,000 in my pocket,” but would have been sleeping on the street if not for a friend’s couch and kindness. He called San Francisco a “sanctuary city,” where people can “find a pathway in life to something better, like I did.”

Gabriel Haaland, a Haight neighborhood resident and labor leader, took the mic and proclaimed that “I am, we are, you are, the riff raff! Because the rent is too damn high.” He questioned whether some have taken to the streets partially because of San Francisco’s high cost of living.

SF resident Selina Gomez Sutton said of Prop L: “a San Francisco without street performers and musicians? Crazy.”
But Prop L is also about something other than civil rights, street-side music, and “cleaning up” Haight Street. It’s also about tolerance.

Tellingly, just a few feet away from, and entirely throughout, Rev. Billy’s sermon, a man sat nearby barking and shouting gruffly at apparently nothing but for what (he must have thought) were good reasons indeed. I was there the entire time, and can say that not one attendee told him to stop. Perhaps they were simply jaded to such conduct — or perhaps it was because they respected his right to exist.